As the U.S. Environmental Protection Agency (EPA) moves forward with standards to reduce power plant emissions—which are due to be finalized in June 2015—many states are wondering how they will comply. WRI’s fact sheet series, Power Sector Opportunities for Reducing Carbon Dioxide Emissions, examines the policies and pathways various states can use to cost-effectively meet or even exceed future power plant emissions standards. This post explores these opportunities in Illinois. Read about additional analyses in this series.

Like all U.S. states, Illinois will need to reduce its power sector carbon dioxide (CO2) emissions in order to alleviate climate change impacts and comply with future EPA standards. The good news is that the state has already taken steps to reduce its emissions, including saving energy and increasing its use of renewable energy sources. And, Illinois has the potential to go even further. New WRI analysis finds that Illinois can reduce its CO2 emissions 35 percent below 2011 levels by 2020 just by complying with current policies and taking advantage of existing infrastructure. Achieving these reductions will allow Illinois to meet or exceed moderately ambitious EPA power plant emissions standards, which are due to be finalized in 2015.

Illinois’ Power Sector Is Getting Cleaner

Power sector CO2 emissions in Illinois fell 2 percent between 2005 and 2011, even as electricity generation increased by 3 percent. This is mainly because Illinois has been using less coal for electricity generation while increasing its use of renewable sources. Renewable generation increased seven-fold between 2005 and 2011, while coal generation fell 2 percent. Over 800 MW of new wind and solar capacity were added in 2012 and renewable sources comprised 7 percent of all electric capacity.

The state’s reliance on coal will continue to decrease as aging coal plants are retired. As of 2012, nine coals plants in the state, comprising 15 percent of existing coal capacity, were slated for retirement. But coal still comprised 45 percent of in-state generation in 2011, while nuclear and renewable sources comprised 48 percent and 4 percent, respectively.

As we discussed in a blog post in August, states may have considerable flexibility in how they comply with EPA’s forthcoming power plant emissions standards. EPA could allow states to pursue a range of CO2 reduction opportunities—including greater use of existing lower-carbon power plants, increased use of renewables, and energy efficiency, among other strategies. Our analysis found that Illinois could use the following tools to reduce its power sector CO2 emissions: 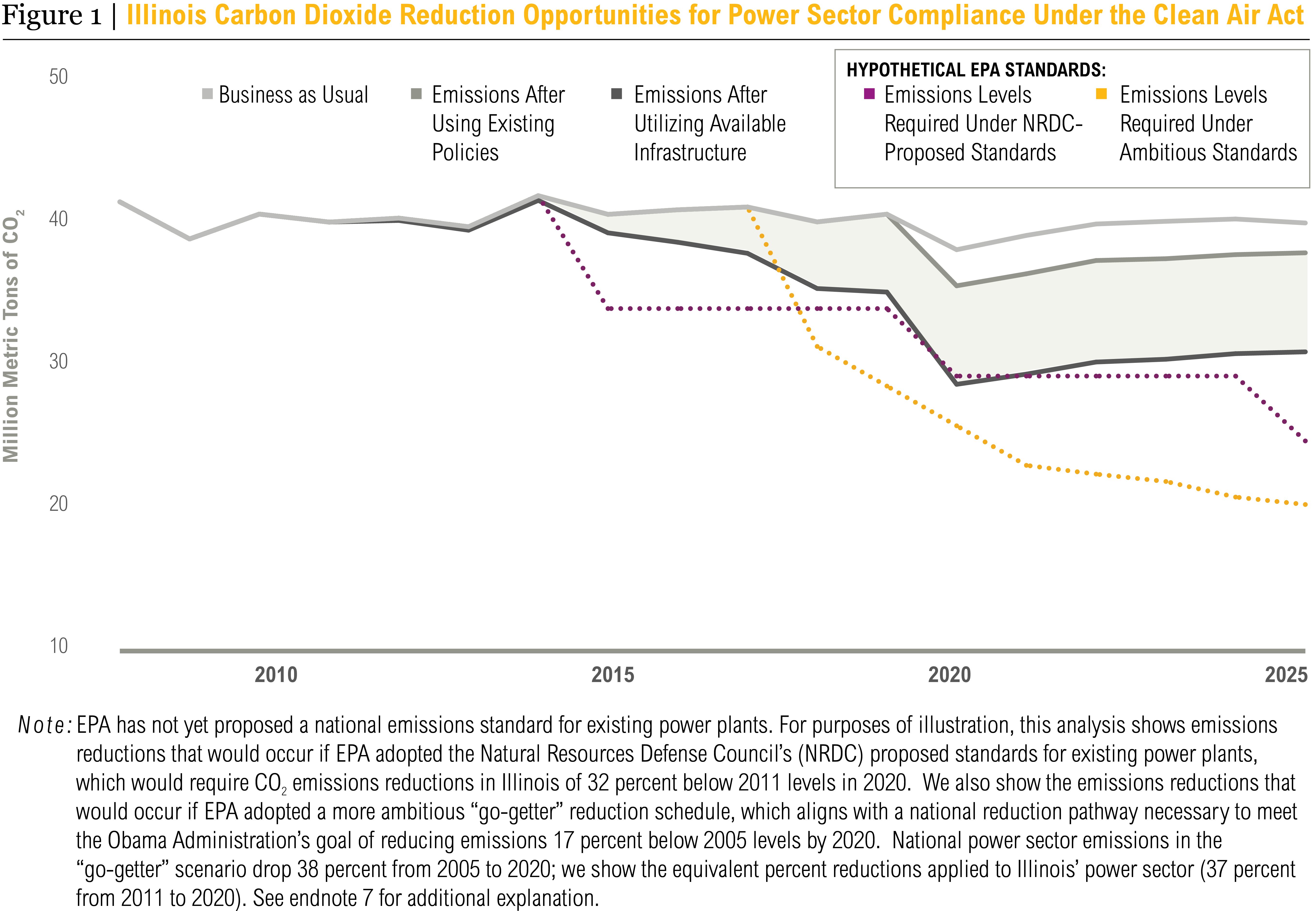 The State’s Clean Energy Policies Are Good for the Economy

Between 2003 and 2013, the growing wind industry in Illinois generated a total of over $7 billion in local investments and over $10 million in annual lease payments to landowners in the state. The Illinois Power Agency found that the renewable energy standard enabled significant job creation and economic development opportunities and, in 2011, the growth of wind energy reduced electricity rates by about 4% per Megawatt-hour of electricity generation, for total statewide savings of over $175 million. Illinois ranks fourth in the nation for number of jobs in the wind industry, supporting 6,000-7,000 jobs in 2012.

Illinois Can Build Off Progress Made to Date

Illinois is well-positioned to reduce its power sector emissions in the near term, but it’s important that the state continue to build on the progress it’s already made. The state’s experience has shown that emissions reductions don’t have to come at the expense of jobs and economic growth. This is another reason why Illinois should strive to follow through on its clean energy policies and consider building on these policies in the future. By doing so, Illinois will not only be able to meet EPA’s power plant emissions standards, but also help prevent the worsening impacts of climate change.