The Malaysian state of Sarawak, on the north coast of the island of Borneo, was once home to one of Asia’s most biologically diverse tropical rainforests. That changed with the advent of large-scale industrial logging in the 1980s. By the end of that decade, Sarawak was at the center of an intense international debate about the role of logging in runaway tropical deforestation, and its destructive impacts on both biodiversity and the rights and livelihoods of forest-dependent indigenous peoples. This is the story of how a technical report by a British aristocrat initiated 25 years of political and financial support for a disastrous forest management program in Sarawak that continues to this day.

In 1989, the International Tropical Timber Organization (ITTO), an intergovernmental organization established to facilitate the management and trade in tropical timber, commissioned a blue-ribbon panel to assess the impacts of tropical timber logging in Sarawak.  A British conservationist named Dr. Gathorne Gathorne-Hardy, the 5th Earl of Cranbrook and a member of the House of Lords, led the mission, which delivered its report to the ITTO Council in May 1990.

The Cranbrook Report started by explaining why Malaysia was under such intense international scrutiny over logging in Sarawak, citing concerns about unrestrained deforestation and the violation of local communities’ human rights. But the report essentially defended the status quo, calling the idea of banning imports of tropical timber from Sarawak “naïve and misguided.”

The report argues that sustainable forest management (SFM) should be defined by a state-dominated process of balancing interests with little regard for maintaining the ecological integrity of the forest. With respect to indigenous rights over the forests, the authors disposed of this “prior and awkward difficulty” by concluding that indigenous peoples only possess those rights that the State agrees to grant to them under the law. The report concluded that SFM was possible for Sarawak but only proposed minor technical fixes, such as strengthening the staff of the Forestry Department and reducing yields in some forest categories. 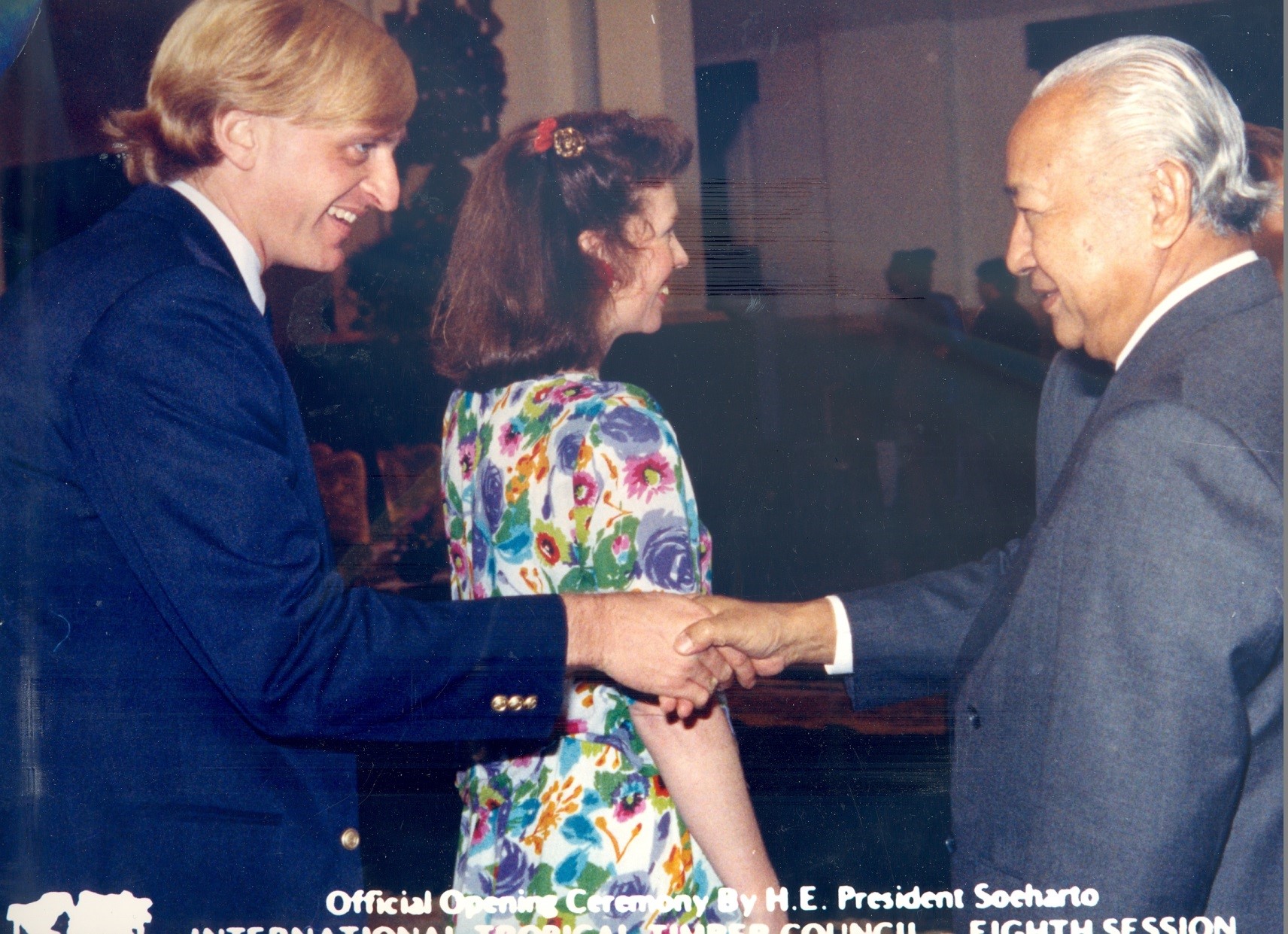 The author of this post with Indonesian President Suharto at the launch of the Cranbrook Report, 1990. Image credit: Office of the President, Republic of Indonesia

By 1990, the ITTO’s raison d’être was mainly legitimizing continued industrial-scale logging of tropical forests and facilitating international trade in tropical timber, particularly with Japan (Sarawak’s major timber client as well as host to ITTO’s Secretariat and its major financial patron). Sarawak was a key symbol and test case for the legitimacy of the SFM paradigm at the heart of ITTO’s mission. Following the Cranbrook Report, ITTO committed more than $14 million to SFM projects in Sarawak between 1992 and 2014. The close ties continue today: at the ITTO 2015 meeting in Kuala Lumpur, the Sarawak Timber Industry Development Corporation hosted a gala dinner, having successfully expelled longtime critic NGO Bruno Manser Fonds from the meeting, silencing any discordant notes.

Despite 25 years’ of mounting evidence that SFM in Sarawak has been a disaster for indigenous peoples and biodiversity in the state – and despite a relentless drumbeat of revelations about the deeply corrupt clan of the Chief Minister (1981-2014) Abdul Taib Mahmud  – the myth of SFM in Sarawak has survived. Now new information and analysis made possible by Global Forest Watch shows that significant damage has already been done.

Never-before-released maps of logging concessions published by Global Forest Watch offer an unprecedented look at the extent of industrial concessions in Sarawak, telling the story of what has happened in the years since the release of the Cranbrook Report.

These maps reveal that timber license concessions cover 6,542,852 hectares (more than 16 million acres), over half (53 percent) of Sarawak's total land area and demonstrate that Malaysia has one of the highest rates of degradation of Intact Forest Landscapes in the world in both absolute terms (area) and relative terms (percentage). An on-the-ground perspective on these trends will be also presented in the forthcoming documentary, The Borneo Case.

While the new chief minister of Sarawak, who took office in 2014, has promised to institute reforms, it is too little, too late: Sarawak is running out of forests. Other countries that still possess tropical forests can hopefully learn from the sad story of Sarawak and choose a different path that conserves biodiversity, recognizes indigenous rights, and rejects corruption and cronyism.

For the ITTO, which must bear some responsibility for the Sarawak story, it is time to fundamentally reconsider the organization’s assumption that industrial-scale logging in tropical rainforests can be “sustainable” within any reasonable definition of the word. It is time to draw the curtain on the myth of SFM in the tropics while there is still any tropical forest left. The story of Sarawak and many other places teach us that tropical forests are not a “renewable resource.” They cannot be restored or rehabilitated within any time frame meaningful to human beings following logging, particularly of the intensive type seen in Sarawak.  Some things, when broken, cannot be fixed, they can only be mourned.

UN Issues New Protections for Rosewood Trees, the “Ivory of the Forest”