Siyabulela “Siya” Sokomani, a young entrepreneur from South Africa, runs a commercial nursery that grows thousands of native saplings every year. By nurturing those trees, he is restoring degraded land and fighting climate change in his community’s township in Cape Town. He’s one of countless African leaders critical to achieving the African Forest Landscape Restoration Initiative’s (AFR100) goal of building vital landscapes across 100 million hectares by 2030.

Yet historically, people like Sokomani have been underrepresented at major restoration events and on social media. The Global Landscapes Forum (GLF), the world’s largest platform for sharing information on sustainably managing land, is traditionally held in Bonn, Germany. This can make participation nearly impossible for people like Sokomani who face structural obstacles with visas or travel expenses. Voices like Sokomani’s also get drowned out on social media by an international development community that often disregards marginalized voices. As a result, key discussions often happen without the on-the-ground perspectives vital to effectively restore the world’s degraded landscapes.

Recognizing the need for more inclusivity, the GLF decided to host its first major event in Africa. It first came to Nairobi, Kenya in 2018, followed by a second event in Accra, Ghana in 2019. WRI analyzed the impact that the change of continent had on participation from African restoration leaders.

This analysis found that hosting the GLF in Africa, both in Kenya and Ghana, resulted in a more diverse audience — half of the 13,000 people who attended the 2018 event, both virtually and in person, were from African countries. The diversity of voices on social media was even more impressive. The 2018 GLF in Nairobi reached 52 million people on social media, driven in large part by African restoration leaders.

The paper detailing this analysis, which was published in the Journal of Computational Social Science, establishes a quantitative method to measure the engagement of African voices during important environmental events. We used machine learning, natural language processing and computer vision techniques to analyze millions of tweets. After anonymizing the data, we identified the locations, age group, gender and ethnicity of each user. Next, we used algorithms — similar to those that power Google searches — to read through and categorize every tweet. This allowed us to analyze how people with different locations, ages, genders and ethnicities interacted with the GLF.

Here’s what we learned:

"Restoration can only succeed by involving communities & giving them the chance to use their traditional #knowledge."—Daniel Kobei, Founder of the Ogiek Peoples’ Development Program. More from #glfNairobi2018 https://t.co/9Iwzw8G9BG pic.twitter.com/bxGD2EtzXM

At the Nairobi GLF, African individuals and organizations were significantly more prominent online, making up 29% of social media engagement, compared to 9% during the prior GLF in Germany. Leaders from Kenya, Nigeria and South Africa formed their own online community that retweeted, shared and promoted the event. This group included Africa-focused reporters and news organizations, such as BBC Africa and Reuters Africa. As a result, African government leaders gained more than 10,000 followers. 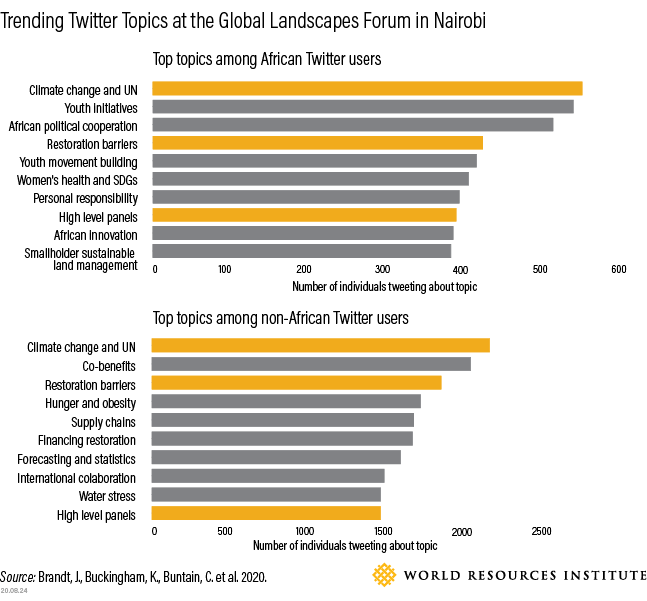 The most popular subjects at the GLF were the latest research, innovations and publications, but interest varied between communities. For example, African tweeters generally posted more about the role of women in restoration, youth initiatives, global supply chains and technology. Non-African users were more interested in restoration’s carbon storage potential, climate policy and statistics on deforestation.

Looking within African communities, there was an even wider variety of interests: women were most interested in the costs of climate change inaction, as well as in biodiversity and food security; youth in individual success stories like Sokomani’s; and older men in illegal logging and supply chains.

The machine learning techniques used to collect this information can help organizers create more relevant messages, resources and calls-to-action. Embracing these insights can make global knowledge platforms like the GLF more effective by helping them reach their target audiences. 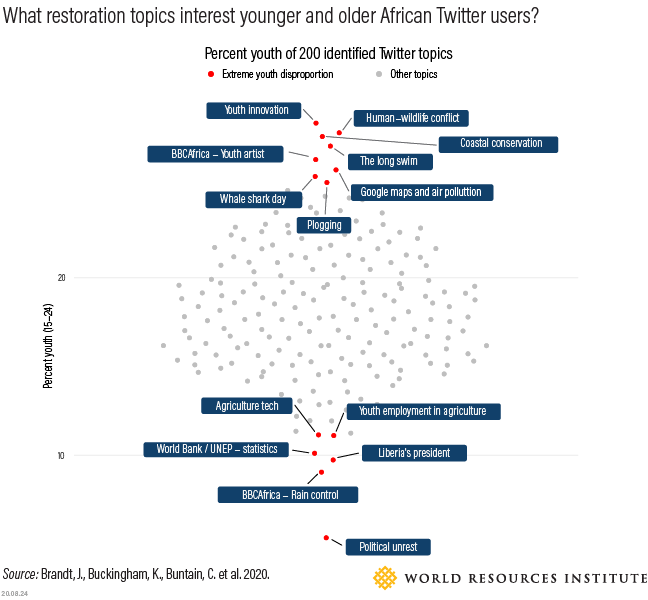 The GLF is known for engaging young people, including hosting a four-week Youth in Landscapes Initiative to build the next generation of sustainable land leaders. As a result, young people from ages 15 to 24 participate online and in-person, especially around youth-related topics.

On Twitter, they differed from their older peers, who were more interested in detailed political conversations and statistics. Instead, young people spread viral content, like “plogging,” where people jog and pick up litter at the same time. Framing communications strategies to fit specific audiences is increasingly important to reach the right people and cultivate them as allies to the cause, especially as online conversations continue to fracture.

This study provides evidence for something previously only assumed: changing the location of events like the GLF allows for more meaningful engagement with people like Sokomani, whose perspectives are critical to the success of restoration.  As events transition online with COVID-19, organizers can use these opportunities for virtual connections to engage a wider audience.

Most importantly, people working in development organizations must recognize that taking social media seriously can catalyze broader inclusion in the restoration movement. Africa has the youngest population in the world, and 725 million people on the continent will have a smartphone by the end of 2020. Social media activists can spark youth movements in their countries of origin and beyond. Adaptive communications strategies that learn from these influencers could engage more young people and energize movements on and offline.

These young activists are also key to rebuilding African economies during the COVID-19 crisis, as extreme poverty is expected to rise for the first time in 22 years. Helping them create sustainable jobs in Africa’s rural areas, home to millions of ambitious young people, should be a top priority for recovery. The restoration community needs to listen to young people that are eager to try out new solutions to the problems that their communities face, including the nature-based solutions that will be key to economic recovery in Africa.

These lessons don't just apply to environmental work. Advocates for health, peace and education could also benefit from more inclusive and effective online conversations surrounding major events. But this is only possible if organizers take steps to make that happen, like deciding to bring events where the most critical work is happening.

“Seizing this opportunity will make a huge difference,” said Wanjira Mathai, WRI’s Vice President and Regional Director for Africa. “WRI Africa will work to inspire a restoration and conservation generation driven by our youth. This will be a triple win — for green jobs, for climate, and for the journey towards poverty alleviation.”

Excluding marginalized voices in environmental movements leads to ineffective solutions at best, and contributes to further marginalization at worst. Making space for all voices is essential for building a more sustainable world.