California will require that all new passenger cars and trucks sold in the state be emissions free by 2035—a move that is expected lead to more than a 35% reduction in greenhouse gas emissions (GHG) and an 80% cut in nitrogen oxide emissions. While more than a dozen countries have set out targets banning the sale of gas guzzling cars, California is the first state in the United States to take this stance. No doubt, California’s decision will face legal challenges, but this is a major announcement that takes the fight against climate change to the next level.

The United States cannot win the war on climate change without winning the transportation battle. Earlier this year, our research highlighted that four out of five U.S. states have decoupled their economic growth from emissions of heat-trapping carbon dioxide. That is great news, but we have a long way to go to get to our goal of net-zero emissions by 2050. In most states the largest emission reductions have come from reduced dependence on coal-fired power plants as electricity producers have increasingly turned to cheaper and cleaner sources of power, particularly natural gas, wind, and solar. As a result, the transportation sector overtook power plants as the largest source of carbon dioxide emissions nationally in 2016, and the gap is increasing as transportation sector emissions grew by 7.4% between 2012 and 2019, while emissions from the power sector declined by 20% over the same period.  In 28 states and the District of Columbia, transportation is now the biggest source of emissions. 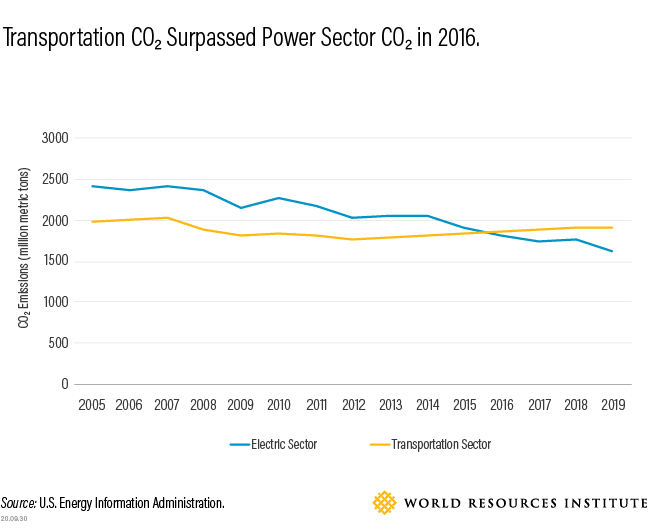 Where Do Transportation Emissions Come From?

The largest sources of the emissions within the US transportation sector are our cars, SUVs and pickup trucks. These “light duty vehicles” run predominately on gasoline and accounted for 59% of transportation sector greenhouse gas emissions in 2018. Medium and heavy-duty trucks, which mostly burn diesel fuel, were responsible for 23% of emissions, while airplanes were responsible for 9%. 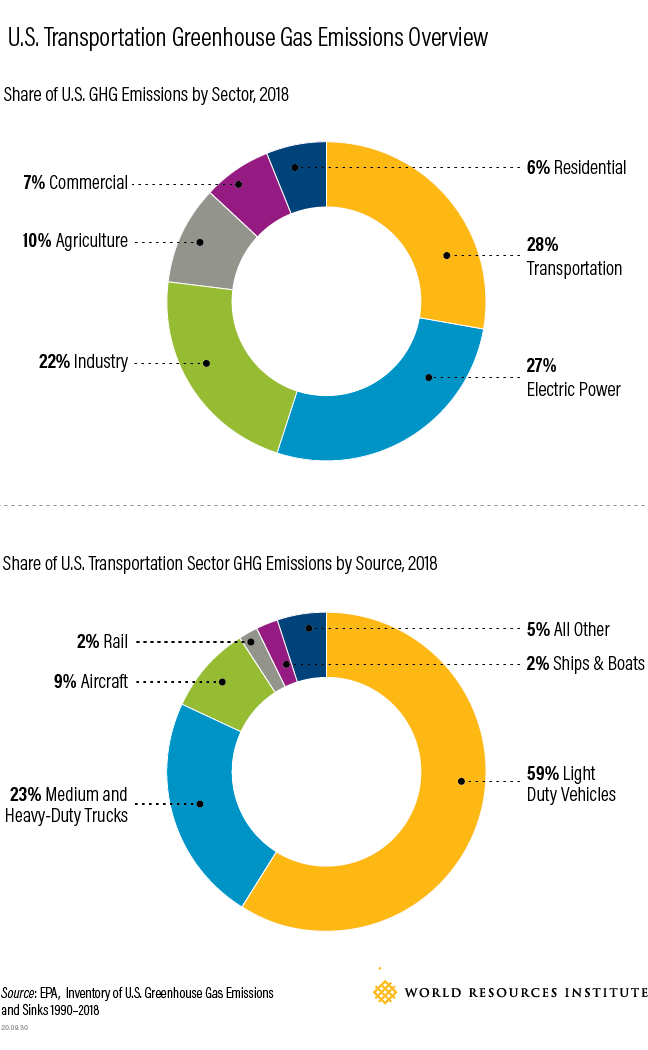 Fuel economy improvements in light duty vehicles have been a significant contributor to reducing emissions in this segment of the transportation sector. Between 2005 and 2018, GHG emissions from light-duty vehicles declined by more than 10%. This highlights the important role fuel efficiency can play as a climate mitigation strategy at a time when the Trump administration is weakening fuel economy standards for new cars and trucks. Emissions from medium and heavy-duty trucks, on the other hand, increased by 10% during the same period. These trucks and buses account for less than 5% of vehicles on the road but they are a major source of air pollution, which disproportionately impacts people of color and low-income communities located along major trucking corridors, ports, and distribution hubs. 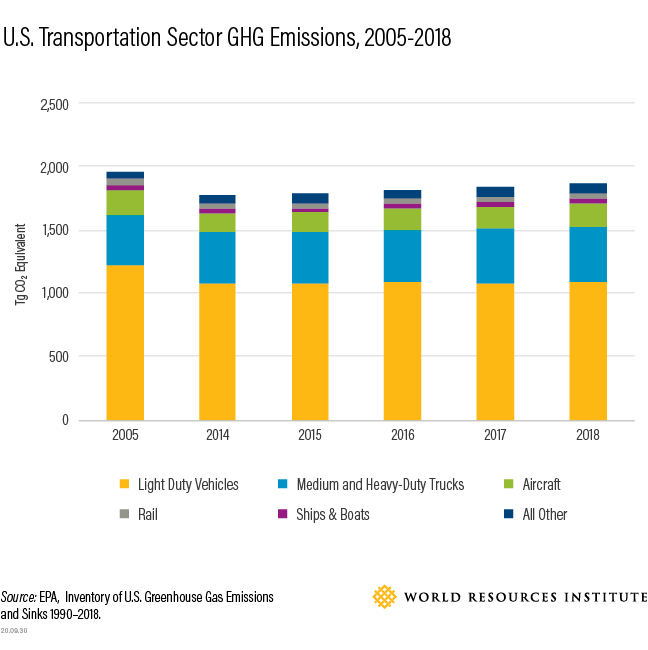 In 2020 COVID-19 has resulted in a dramatic reduction in transportation fuel consumption, particularly in jet fuel, which declined by two-thirds in May compared to the same month last year. Meanwhile, gasoline consumption dropped by one-quarter and diesel consumption by 8% over the same period. While this level of reduction is clearly temporary, it is unknown when, or even if, air travel will recover to pre-COVID levels. Long-term, however, transportation is expected to remain a major source of emissions. 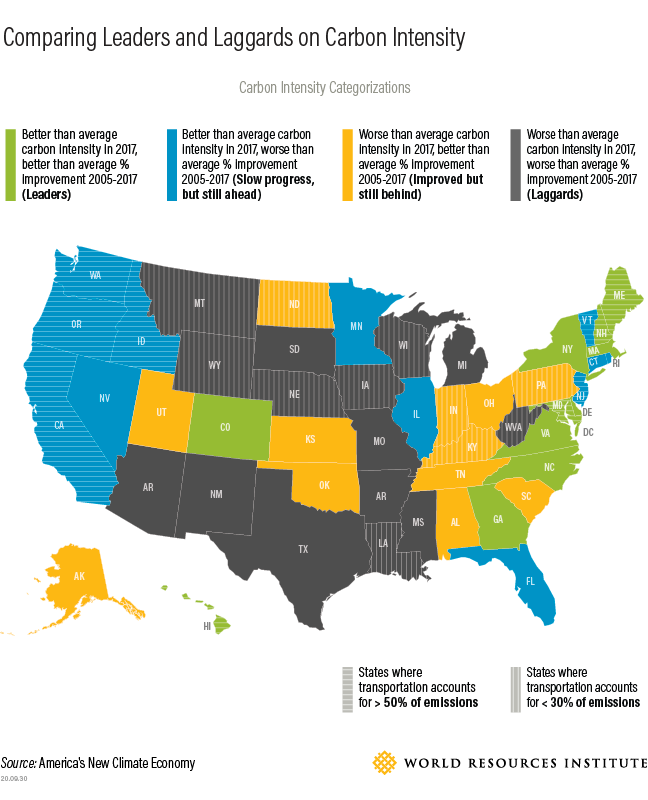 While only 3 states saw increased emissions from power plants between 2005 and 2017, 13 states increased their transportation sector emissions during this period, a list which overlaps with the states that did not decouple their overall emissions from GDP growth.

Strategies to Shift to an Equitable, Low-carbon Transportation Sector

While we need to accelerate decarbonization of the power sector and confront emissions from the industrial sector, the highest priority for U.S. climate policy over the next few years must be to turn the corner on emissions from the transportation sector. Light duty vehicles are the largest source of transportation sector carbon dioxide emissions, so restoring strong efficiency standards for such vehicles sold from 2022 through 2025 is important to make near term progress, but those standards will barely be enough to compensate for increases in driving. To meet the goals of the Paris Agreement, the United States must reach net zero emissions by mid-century, which implies that the use of fossil fuels for transportation should be eliminated by then as there is no practical way to capture carbon dioxide emissions from mobile sources. Because cars last more than 15 years on average, this means the sale of internal combustion engine vehicles needs to be phased out by no later than 2035, as called for by the House Select Committee on the Climate Crisis, and the electricity used to power our transportation system must come from zero-carbon sources.

First, we need to replace current measures of transportation system performance (speed and congestion) with measures of access (especially to jobs), pollution and safety. Doing so would shift investment away from capacity expansions for automobiles, toward more zero-emission transit service, capacity and coverage; more bike and pedestrian facilities; more electric vehicle charging infrastructure; better maintenance of existing roads, rails and bridges; and more development near transit stops and other locations that provide easy access to jobs and daily needs without requiring a private vehicle.

Public transit, in particular, is vital to people of color and low-income communities where fewer people own cars and many live further away from living-wage jobs, limiting their economic opportunities. Equitable zero-emission rural transportation systems must also be part of the equation, given that most rural communities have increasingly limited public transit networks, creating a downward spiral in transport access.

Second, we need to commit to establishing a zero-carbon transportation system, not merely a less polluting one. Policymakers should focus particularly on eliminating emissions from diesel school and transit buses, ports and freight corridors that pump toxic pollution directly into overburdened communities. The pledge to collaboratively develop an action plan to accelerate bus and truck electrification recently made by 15 states and the District of Columbia is an important step forward. Investing in electric school and transit buses can create jobs, lower operating costs, improve public health and lower carbon emissions. We should also focus on the most intensively used passenger vehicles, emphasizing increases in zero-emission miles, not just zero-emission vehicles. Lyft’s commitment to 100% electric vehicles on its platform by 2030, followed by Uber’s announcement to become a fully zero-emission mobility platform by 2040 highlights ride-hailing companies’ recognition of the catalytic role they can play by electrifying vehicles that rack up the most miles each year. Finally, building on California’s zero-emission vehicle program, and the growing number of states that have adopted it, we need to set a national zero-emission vehicle standard that reaches 100% by 2035.

Internal combustion engine vehicles provided convenient and affordable transportation to hundreds of millions of people over the last century, but they have also imposed enormous costs in the form of congestion, accidents and pollution. Whether such trade-offs were made appropriately in the past may be debatable, but we now know better and have better options. It’s time to build an accessible, safe and clean transportation system for the 21st century. California shows us the way.