“Why did you choose to come to Antarctica?” my fellow passengers asked shortly after we exchanged names. So many answers quickly surfaced in my mind: the wildlife; the icebergs; the history of exploration. But above all, I decided to travel to world’s southernmost pole because I had read so many scientific articles about the rapidly changing white continent. It was a place that seemed so far away, yet I felt like I knew it intimately from the abstracts I came across each month.

When I offered the same question in return, I was struck by the number of travelers who said they wanted “to see it before it disappears.”

Of course, Antarctica itself is not disappearing, but the Antarctica we know — and the life that depends on its glaciers and snow-capped mountains — is being transformed.

The rate of ice loss from Antarctica has tripled since 2012 compared to ice losses from the previous two decades. Large enough chunks of ice are calving off of the Antarctic ice shelves that maps must be redrawn. Just this past summer, over the period from November to February, scientists documented unprecedented heatwaves and melting at Casey Station, East Antarctica. These sorts of impacts are expected to continue as warming continues and will be felt far beyond the continent. The breakup of the Antarctic ice sheet fuels sea level rise, affecting communities around the world, while recent research revealed the connection between Antarctic ice, ocean circulation patterns and the risk of more frequent extreme events.

I saw visible signs of this transformation when I visited Antarctica. Here are a few that present a troubling picture of a warming world:

1. Antarctica’s air and ocean are heating up.

I didn’t realize that I left my home in Boston for warmer shores when going to Antarctica. My layers of long underwear and fleece remained neatly folded in my suitcase, as temperatures rarely dipped below freezing. 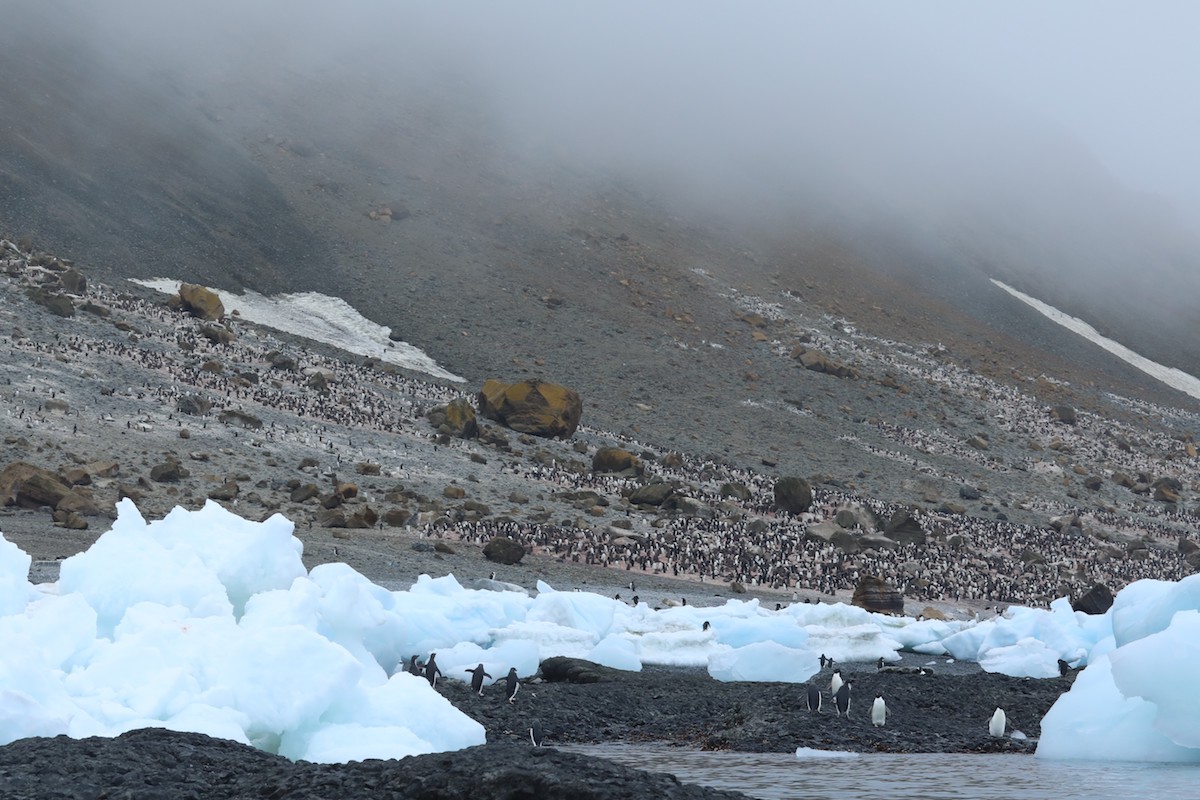 The oceans around Antarctica are getting hotter as well, with some areas of the Southern Ocean warming by 5.4 degrees F (3 degrees C).  This is particularly problematic, because ice loss has been greatest where there’s an influx of warm waters. Researchers now warn that there could be more ice shelves exposed to warm waters than previously thought, especially in East Antarctica, which could contribute multimeter sea level rise if climate change continues unabated.

2. Ice is retreating and melting rapidly.

As a one-time visitor to Antarctica, it is admittedly very difficult to tell that the continent is losing ice as quickly as it is. Yet the rate of ice loss from Antarctica has tripled since 2012 compared to ice losses from the previous two decades. Large enough chunks of ice are calving off the Antarctic ice shelves that maps are needing to be redrawn.

Any one of the glaciers we passed would have been a top tourist destination anywhere else, and we passed dozens of them each day. But the naturalists who return year after year recounted changes. The world’s largest iceberg “A68” – weighing 1.1 trillion tons and the size of Delaware – broke off from Larsen C ice shelf in July 2017. They showed me on a map where it was in nearby seas, now about to enter the open ocean. 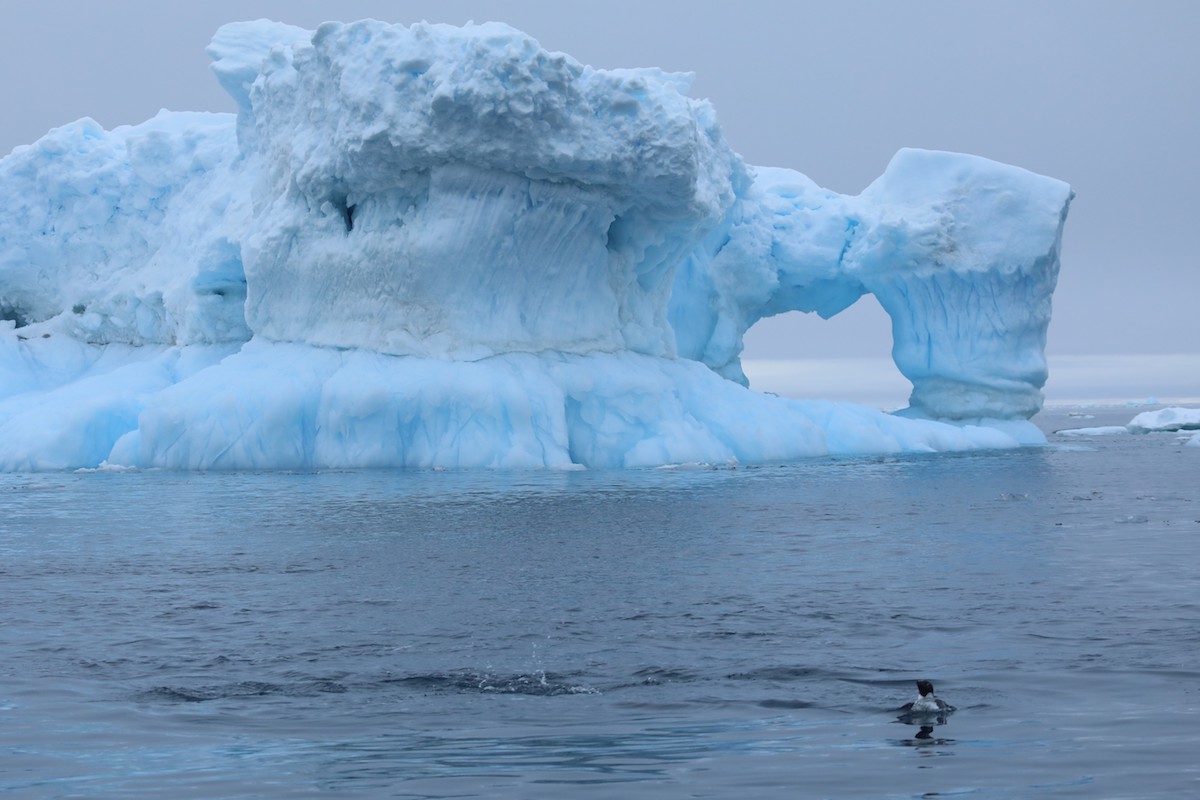 Ice loss from the Antarctic Ice Sheet has rapidly accelerated over the last four decades. Photo by Kelly Levin/WRI

These types of calving events are becoming increasingly frequent. Just last month, an iceberg twice the size of Washington, D.C. broke off the rapidly retreating Pine Island Glacier. Fracturing of the ice shelf is a sign of its weakness; thinning and breakup of the ice can further destabilize the ice shelf.

In the nearby Thwaites Glacier, researchers recently found a large underwater cavity, two-thirds the size of Manhattan. The cavity used to contain 14 billion tons of ice, but much of it has melted in just three years. The presence of a cavity like this allows for warm waters to get further under the glacier, allowing it to melt faster. 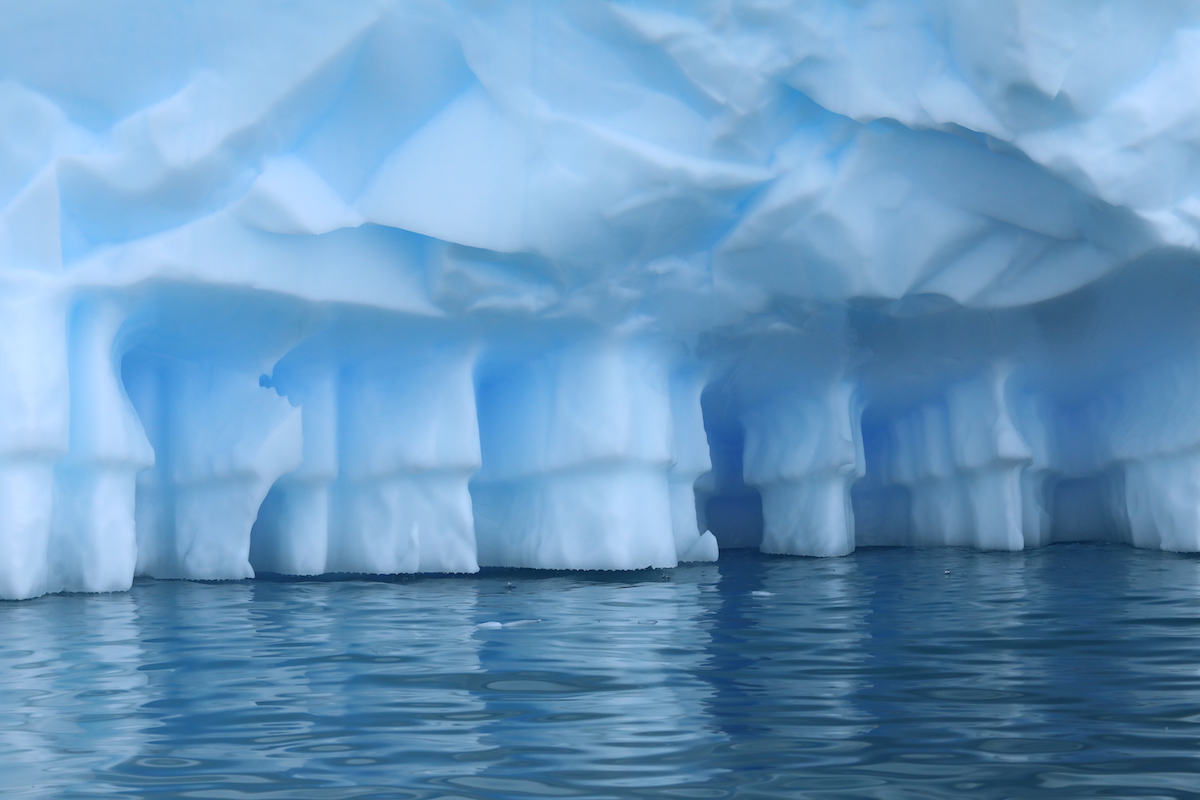 Warming is resulting in ice loss, including melting underneath glaciers. Photo by Kelly Levin/WRI

These discoveries come against a backdrop of longer-term trends. Using satellite record data, scientists estimated that ice mass loss from the Antarctic Ice Sheet has accelerated over the last four decades, increasing six-fold from roughly 40 billion tons per year in 1979–1990 to about 252 billion tons a year in 2009–2017. Those figures mask changes in particularly vulnerable areas. For example, scientists recently found that a part of the Ross Ice Shelf that is particularly important for its overall stability is melting 10 times faster than the shelf average.

Scientists also found that surface meltwater is now widespread across the Antarctic Ice Sheet, leading to rapid and large accelerations of outlet glaciers, a glacier that flows out of an ice sheet and can drain it quickly. Such shifts have not been included in models to date.  And in addition to meltwater, lakes are sitting on the surface of East Antarctica, reducing surface reflectivity of the ice and increasing absorption of solar radiation, which speeds up melting. Scientists also recently reported large lakes under eastern Antarctica. It’s a troubling finding, as glaciers can move more quickly when they sit on water as opposed to bedrock.

3. Some penguin populations are shrinking. 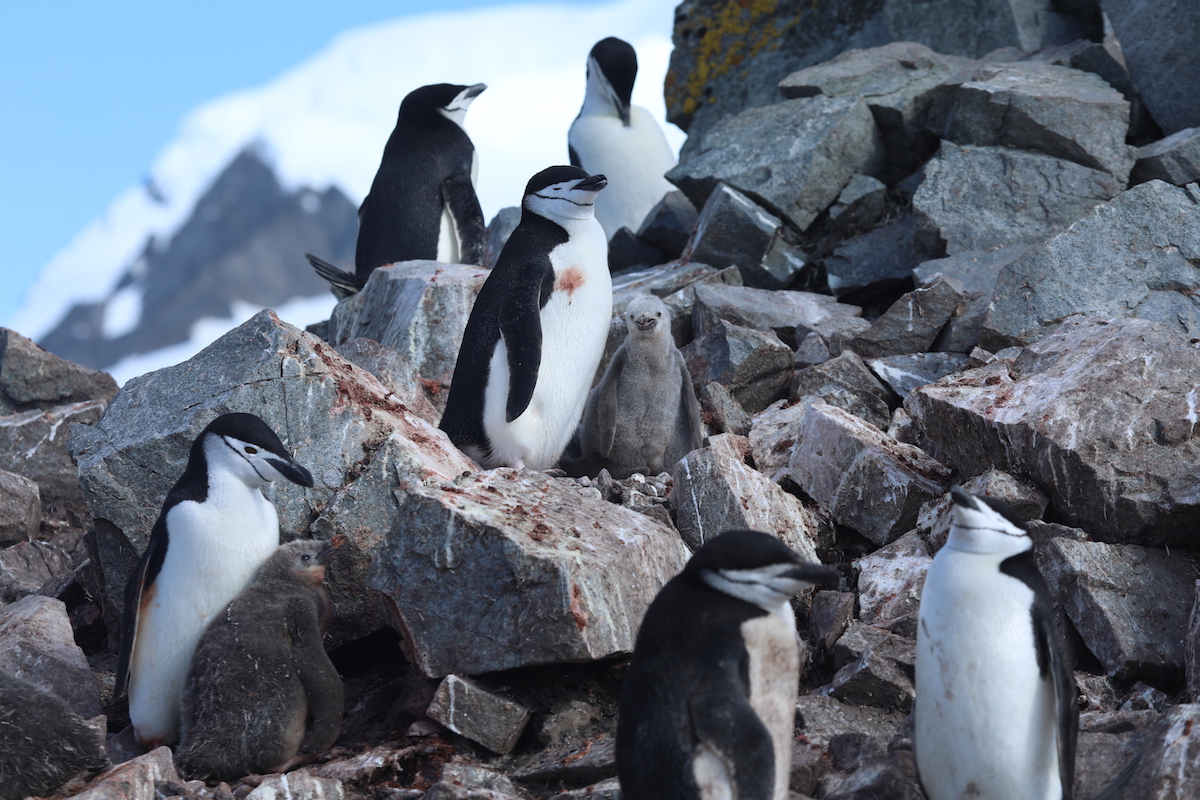 Some penguin species are adapting to warmer temperatures, while other populations are declining. Photo by Kelly Levin/WRI

When I first saw penguins swimming through the water, I thought they were very large fish. But then they jumped out of the water onto the ice and land, waddling to join their fellow penguins while the shrill cries of penguin babies filled the air.

On certain islands off the coast of the Antarctic peninsula, thousands of dots of black and white stretched up the hillside. On others, however, isolated groups of penguins sat next to empty sites that were once full of life. Naturalists told us how several colonies they frequented dropped dramatically in recent years. 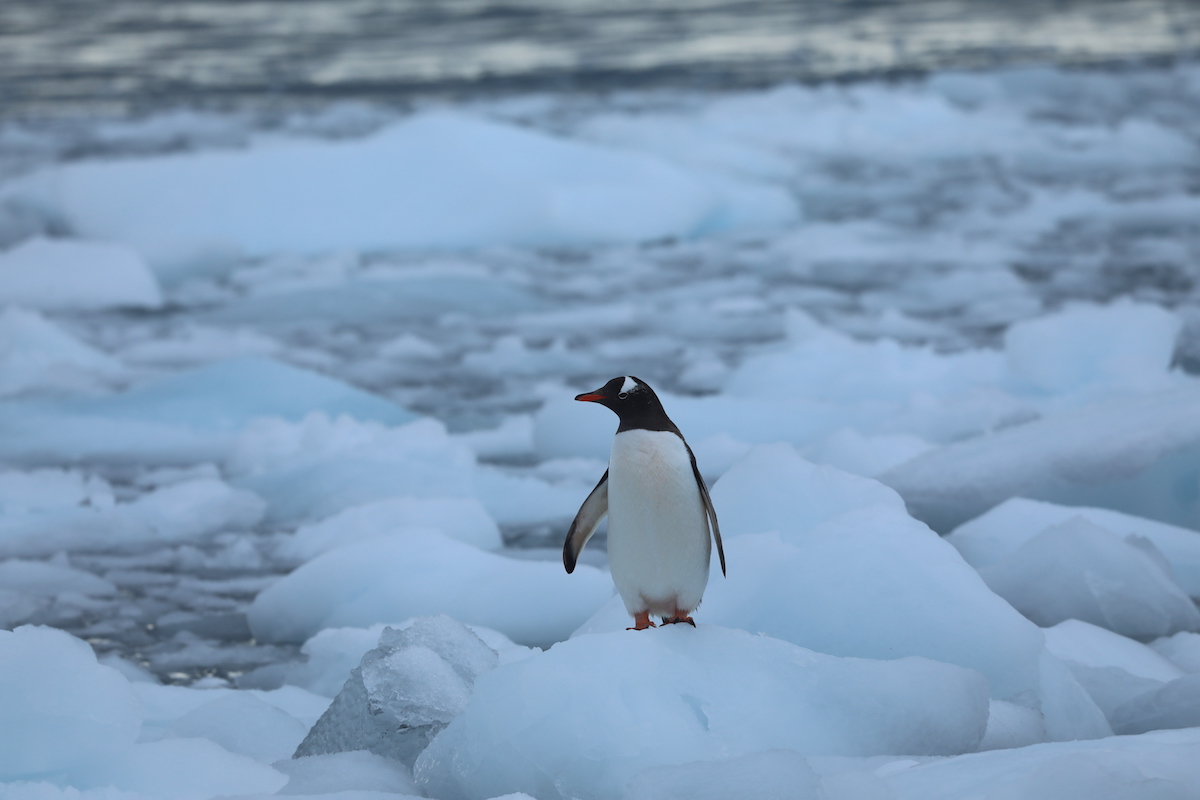 As krill populations decline, some penguins are relying on new food sources, including fish and squid. Photo by Kelly Levin/WRI

Climate change is creating penguin winners and losers. Their fate hinges on how dependent they are on krill, which has declined by 70-80% in some regions of the Weddell Sea and waters off of the Antarctic peninsula, as a result of commercial fishing, sea ice loss and recovery of whales. Gentoo penguins, on the one hand, have diversified their diet to include fish and squid. They’ve seen greater success than the Chinstrap and Adélie penguins, which almost exclusively rely on krill. For example, in the South Shetland Islands off the western Antarctic Peninsula, Adélie breeding pairs dropped from 105,000 to 30,000 from 1982 to 2017. Over the same period, breeding pairs of Gentoos climbed from 25,000 to 173,000. A preliminary census released in February 2020 found that some chinstrap colonies have seen as much as a 77% decline since the 1970s.

When I pictured Antarctica, I envisioned cool shades of blue and white. But there I was with my rubber boots digging into snow that looked like it had been spray-painted red. 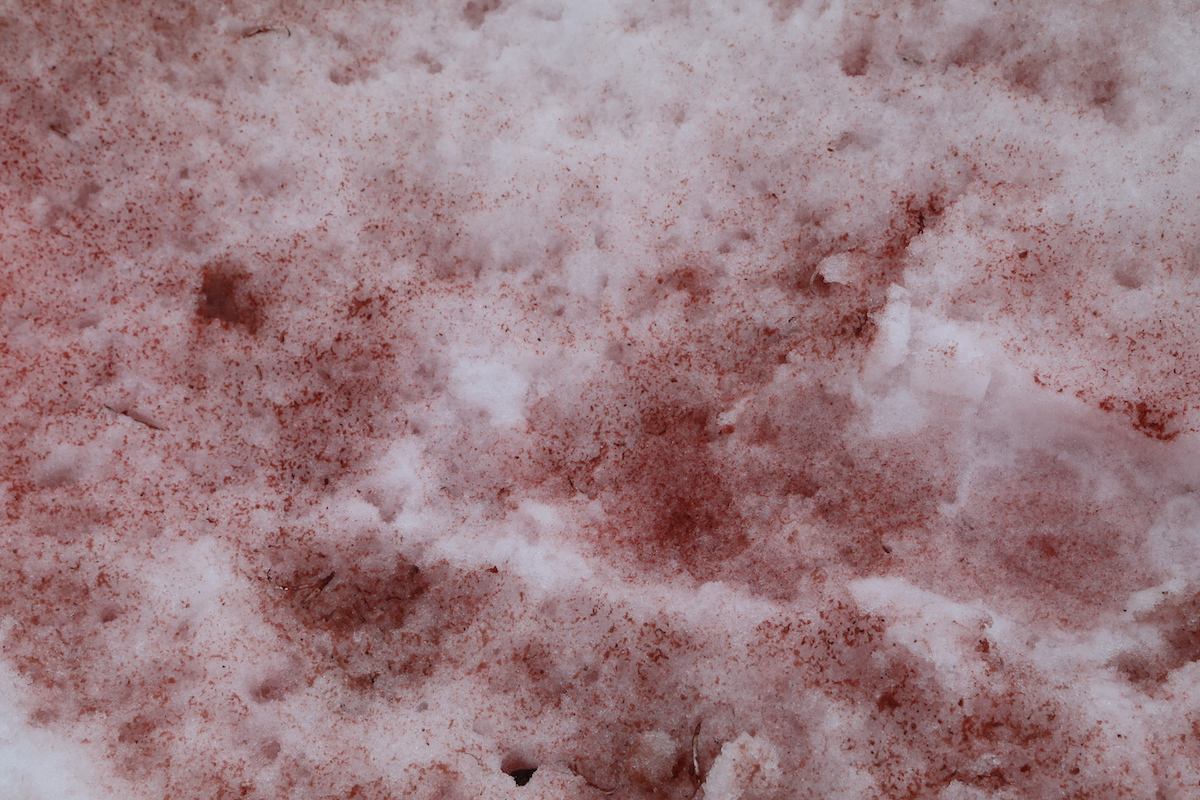 This phenomenon is now new, with reports of red snow as old as millennia, dubbed “watermelon snow.” It’s a result of algae living on the snow, which produce a reddish pigment to protect from solar radiation during warmer seasons.

The problem is that in a changing climate, this can lead to a “feedback loop” that exacerbates warming. As temperatures warm, the algae are able to grow in greater masses, turning the snow a darker shade. This reduces surface reflectivity and, in turn, causes more solar radiation absorption, furthering melt. A recent study of 40 red snow sites across the Arctic confirmed higher melt rates when the algae was present.

5. …and land is getting greener.

In addition to seeing pink snowfields, I never imagined Antarctica to be quite as green as it was, with its mosses, lichens and flowering plants. I never thought I’d see a penguin waddle amongst green grass, almost appearing photoshopped against a background thousands of miles away. 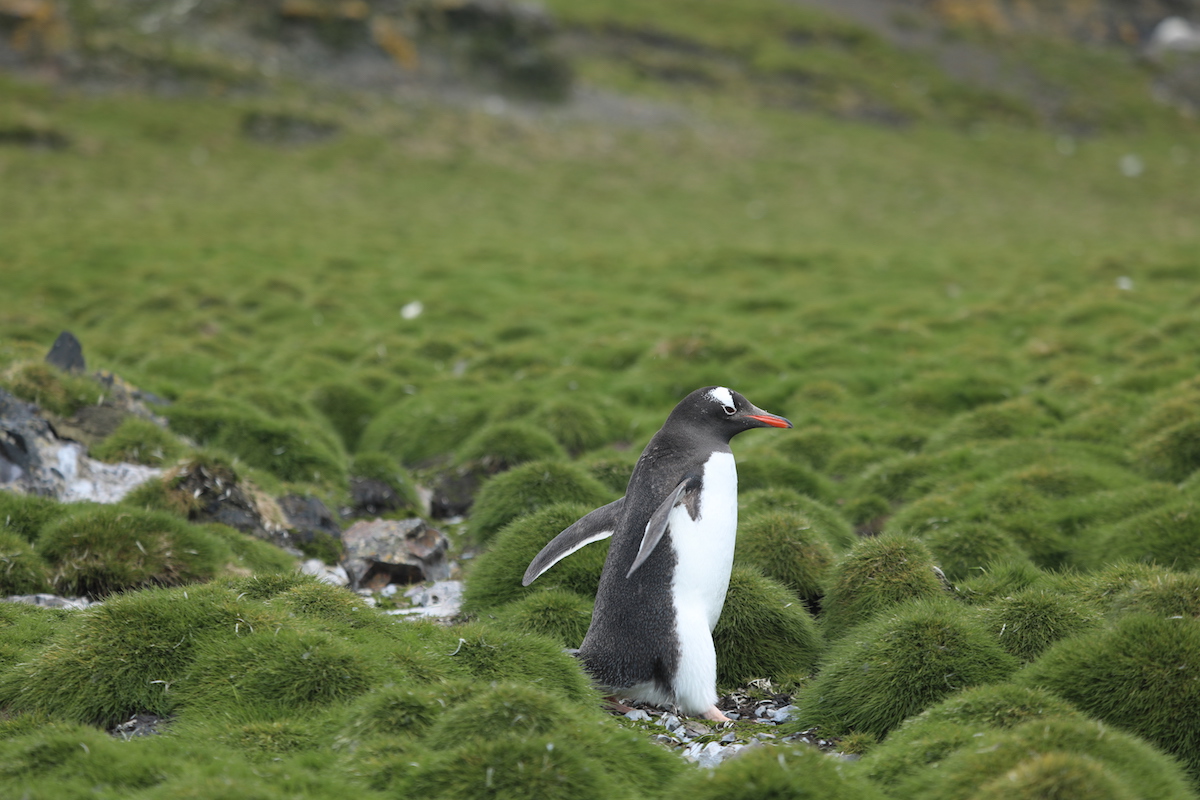 Once snowy hills are now covered in more vegetation as increased temperatures release nitrogen from the underlying soil. Photo by Kelly Levin/WRI

My travels made it abundantly clear that no area on our planet is spared from warming—nor does warming in one area stay confined to that region. Though Antarctica seems so far away, human activities occurring on continents separated by vast seas are affecting its lands, waters and the life that exists there.

And, by the same token, climate impacts to Antarctica won’t be a localized phenomenon; they will affect the entire planet, with rising seas flooding low-lying communities around the world, altered ocean  circulation patterns, and potentially more frequent extreme weather events. Additionally, Antarctica may be a predictor of patterns of change that the rest of the world may see in the future.

The impacts of climate change are already painted across the landscape of Antarctica. Effective and immediate action against climate change is crucial to preventing future impacts that will transform not only Antarctica, but the world at large.