Statistics on global water challenges are daunting: 3 billion people don’t have basic handwashing facilities. A quarter of the world’s population live in countries facing extremely high water stress. There are more than 500 dead zones — areas of the ocean without enough oxygen for most marine life to survive — from untreated wastewater.

The solutions to the world’s water crises, though, cost far less than you might think. New WRI research found that securing water for our societies by 2030 could cost just over 1% of global GDP — about 29 cents per person, per day from 2015-2030.

And the economic benefits outweigh the costs. Every dollar invested in water access and sanitation yields an average $6.80 in returns. The World Bank found that failing to implement better water management policies could result in regional GDP losses from 2-10% by 2050. 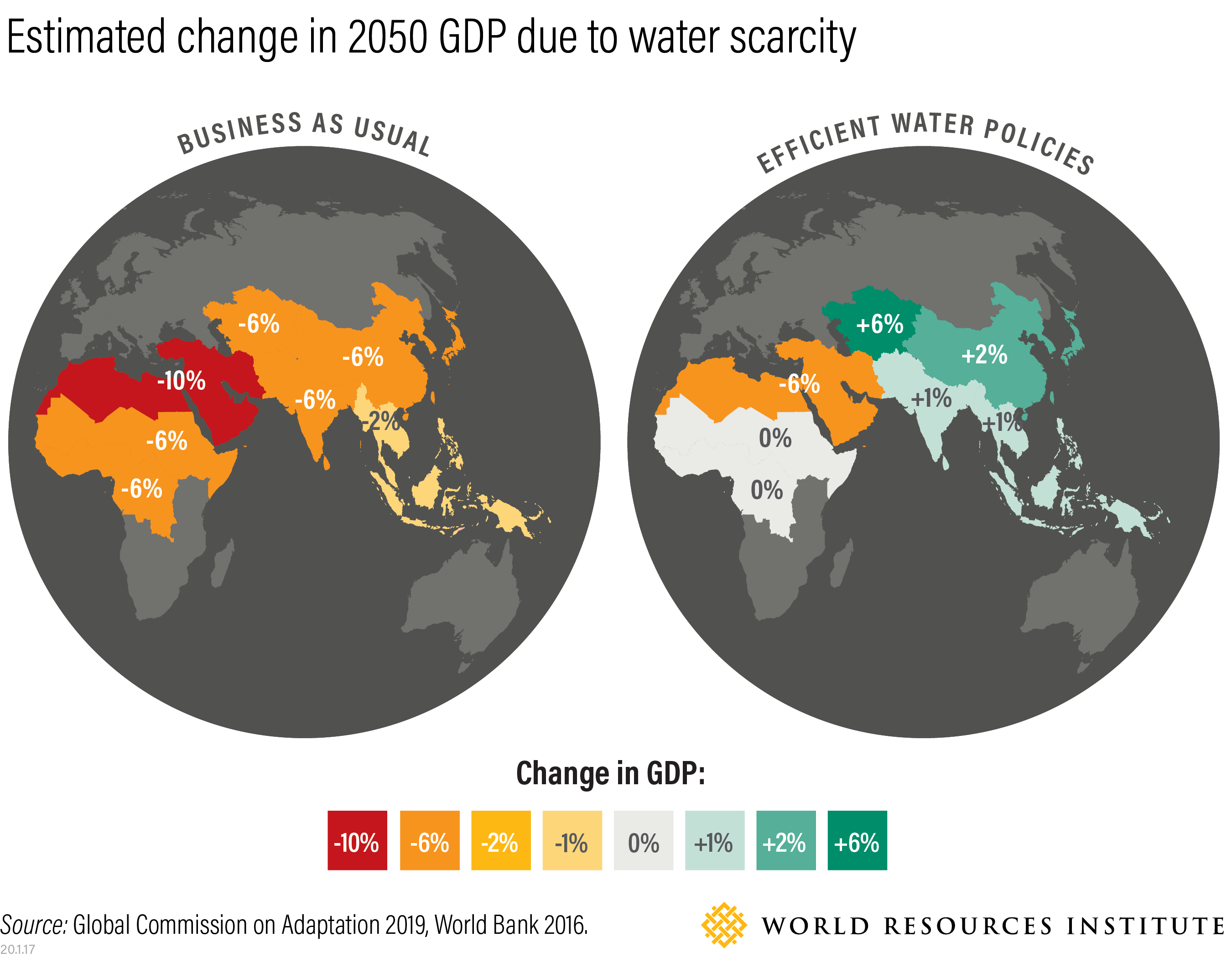 What Is Sustainable Water Management?

Sustainable water management is the desired end-state for achieving water security. It consists of six strategies that can ensure access to water and sanitation for all by 2030, including:

While conserving water-related ecosystems is not explicitly addressed in this framework, many of the strategies incorporate aspects of ecosystem protection, such as preserving environmental flows while tackling water scarcity and reducing dead zones by eliminating water pollution.

Sustainable Water Management Can Achieve Water Security for All

The paper analyzed what it could take to achieve a combination of six strategies that, taken together, can provide water security. We’ve named this desired end-state “sustainable water management” (see text box). Our definition of sustainable water management matches generally to UN Sustainable Development Goal number six (SDG 6), which calls for “access to water and sanitation for all” by 2030. We calculated the investments needed to tackle each of the six strategies in a given country.

We found that 75 countries can achieve sustainable water management at 2% or less of their annual GDP; 70 countries can get there with 2-8% of GDP; and 17 countries will require more than 8% of their GDP to solve their water problems.

Every country faces different types of water challenges and will need to prioritize different tasks to achieve sustainable water management, such as treating wastewater, delivering clean drinking water, adopting stronger water management policies and investing in vital infrastructure. The relative cost share of each of these tactics varies considerably by country. 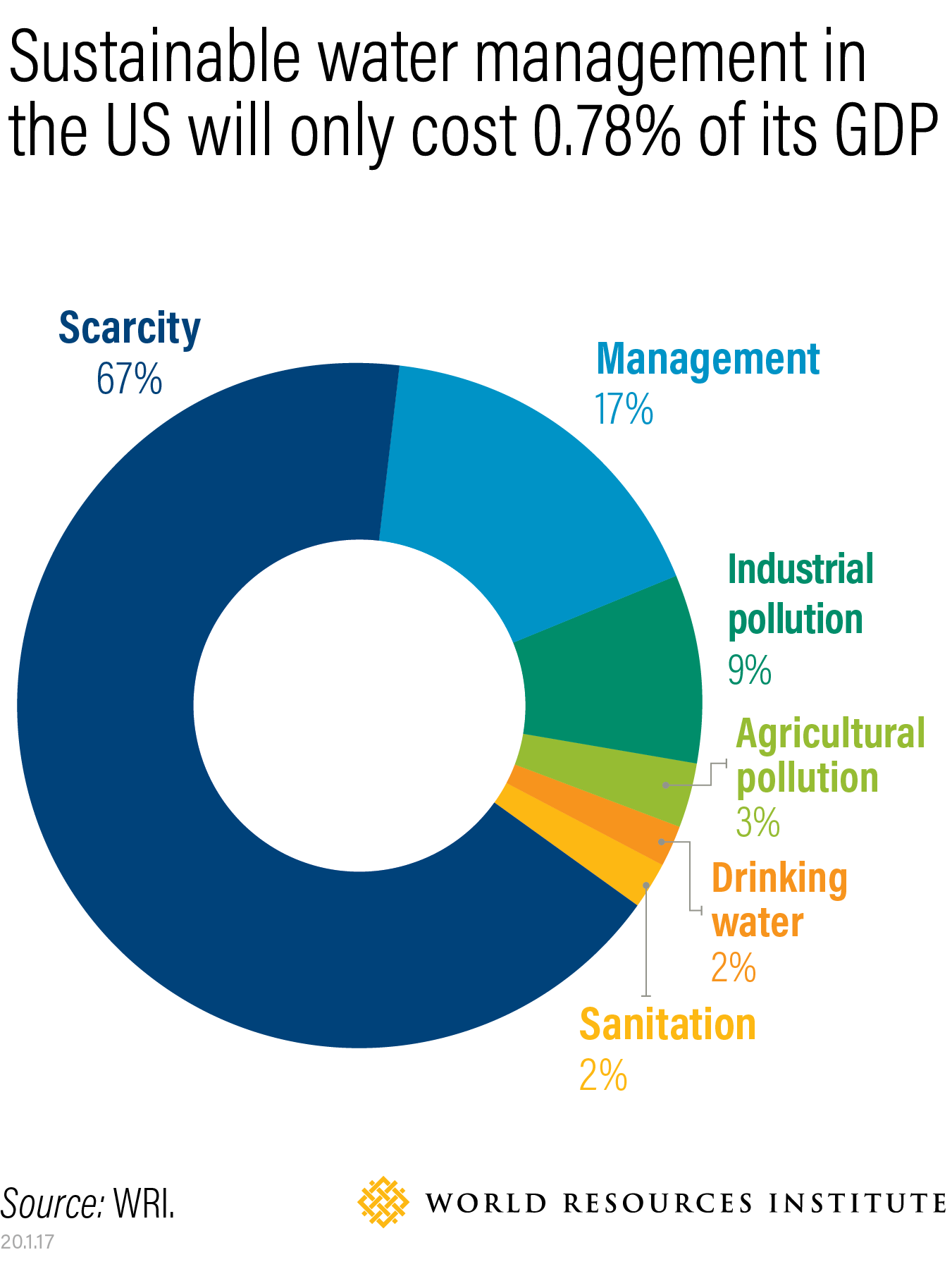 For 75 countries representing half the global population, achieving sustainable water management is well within reach, requiring less than 2% of GDP.

In the United States, for example, the estimated cost to deliver sustainable water management is only 0.78% of GDP. The largest investment gap is solving water scarcity, which makes up 67% of the country’s costs to achieving “water for all.” (Note: this does not include the cost of replacing existing infrastructure, such as pipes, that may have reached the end of its effective life.)

These costs are nothing compared to the damages the country will incur should water scarcity continue. In California, for example, water scarcity and drought fueled the forest fires that caused $24 billion in damages in 2018 and will negatively affect the quality of drinking water for years to come. A forthcoming study by the U.S. Forest Service found that nearly half of river basins that supply water to the United States may not be able to satisfy demands, which could constrain municipal needs, agricultural production and industrial growth. 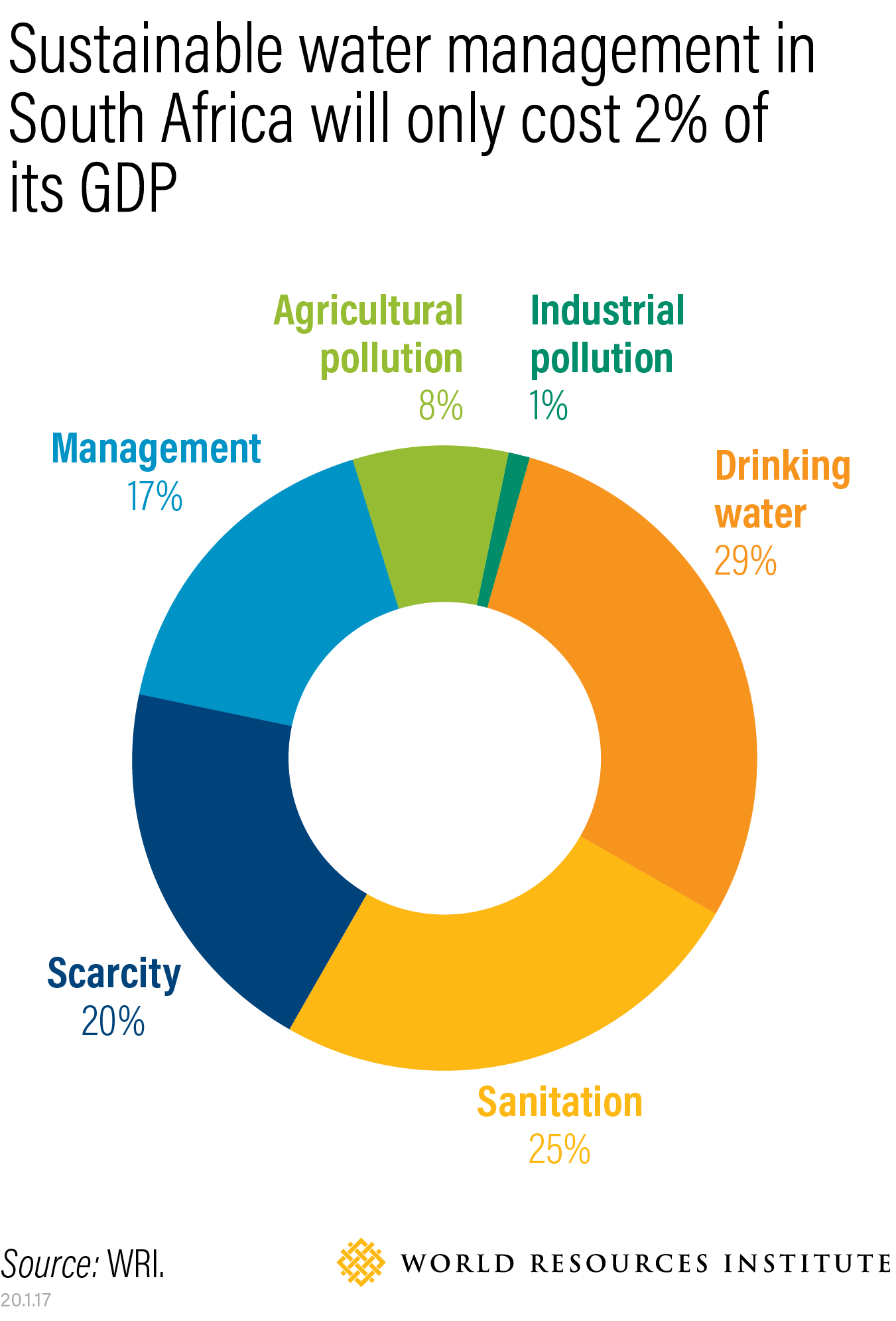 South Africa’s water crisis came under global scrutiny when Cape Town, the nation’s second-largest city, narrowly avoided a “Day Zero” water shut-off in 2018. Yet even in the face of severe risks, it could cost less than 2% of South Africa’s GDP in 2030 to tackle its water issues. More than half of the costs are associated with providing drinking water and sanitation, while addressing scarcity comprises about 20% of the total cost.

17 Countries Need the Most Help in Solving Water Problems

Seventeen countries, representing 10% of the global population, need more than 8% of their annual GDP to deliver sustainable water management. This is due to both very limited water management and infrastructure and relatively poor economies. These countries will need assistance from development banks and other financing and development organizations if they are to fully solve their water challenges. 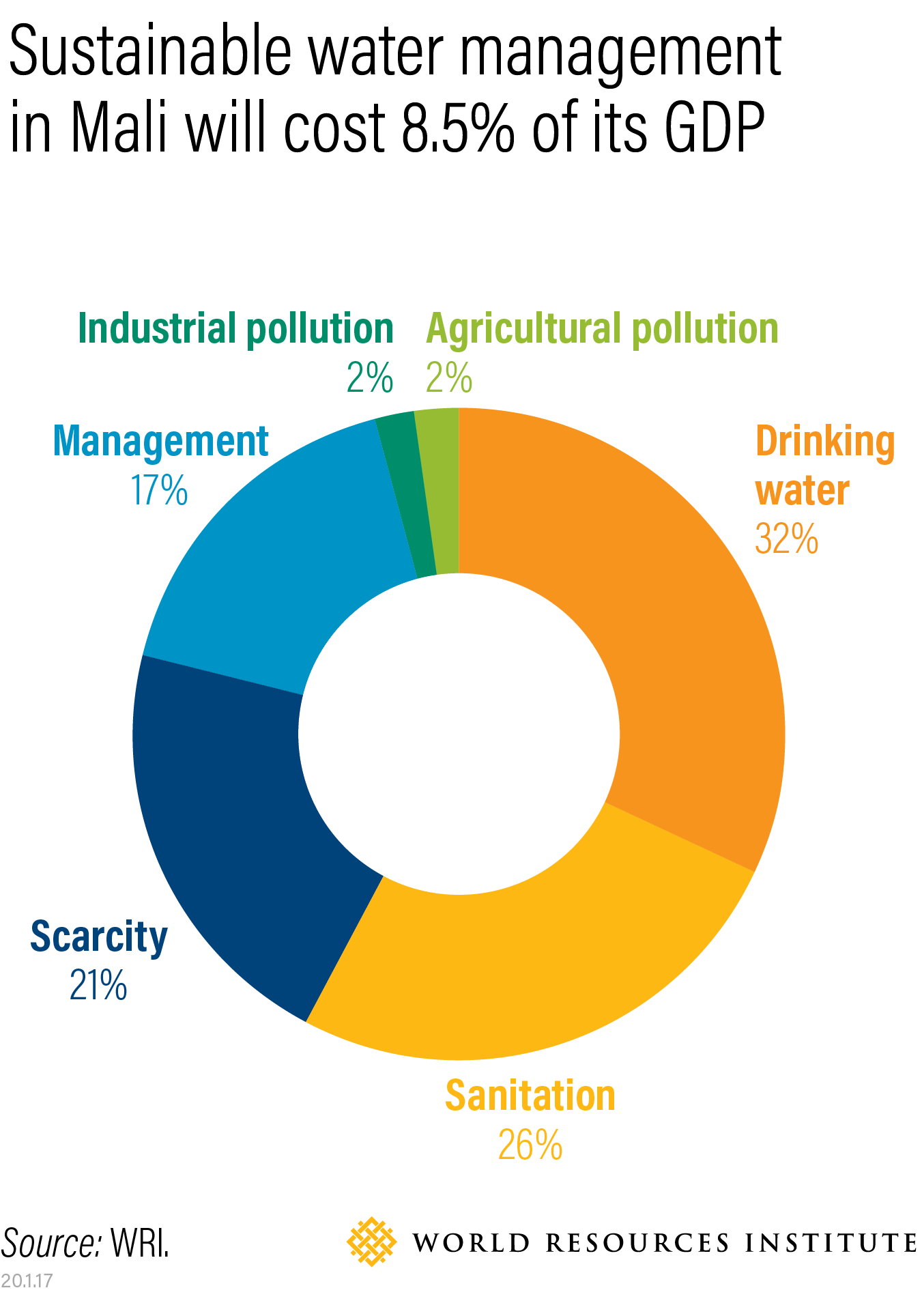 Countries, states and governments around the world should pay attention to, and invest in, water security outside their own boundaries. Water crises cascade beyond national borders: Droughts and water stress can contribute to violent conflict, migration and regional instability. In Mali, violence is already erupting between farmers and pastoralists over increasingly scarce water and land resources. Water shortages can hurt agriculture, raising the prices of staple crops around the world. This can cause poor nutrition, hurt the global economy and further contribute to conflict. For example, droughts in 2010 in Russia, Ukraine, China and Argentina caused spikes in wheat prices, which experts say was one of many driving forces of the Arab Spring.

We estimated costs using global data, so they should not be taken as precise costs or specific policy recommendations. Effective management of water resources requires a deeper dive into local conditions, taking into consideration national water challenges, localized data and the political landscape. The numbers above should be used as a jumping-off point for further research and an initial screen for the countries that need investment the most.

At a broad level, though, the solutions to water-related challenges are already understood. Reducing our collective thirst through demand-management solutions like efficient irrigation often reduces water scarcity, while maintaining productivity and business viability. Nature-based infrastructure, which harnesses ecosystems like forests and wetlands in tandem with traditional infrastructure like pipes and pumps, has major benefits for both water quantity and quality.

The solutions to the world’s water crises are readily available; what’s missing is the money (from public and private sectors) and political will needed to implement them. It’s time that water solutions be seen not as a burden, but as an opportunity. Resolving the world’s shared water challenges improves the lives and livelihoods for billions, benefits the ecosystems around us, and can yield significant returns on investment.