Discussions on the social aspects of climate action have long focused on jobs in carbon-intensive industries, but they've started considering the broader picture. Solutions to reduce greenhouse gas emissions and adapt to climate change can impact all aspects of people's lives and, if ill-designed, can leave many behind.

The COP25 climate conference made some progress on ensuring social justice in shifting towards carbon-neutral and resilient societies. Countries only re-stated in their final decision the imperatives of a just transition for the workforce and decent job creation (recognized in the 2015 Paris Agreement), but they also adopted plans promoting fair climate action for all: a Gender Action Plan that supports gender-sensitive climate action addressing historic inequality; and a workplan to help countries maximize benefits and minimize negative impacts of climate actions, considering intergenerational and gender equity as well as the needs of local communities, Indigenous Peoples, youth and other vulnerable groups.

These are steps forward. In overlooking the equity imperative, decision-makers miss opportunities to prevent regressive impacts of climate action and to reduce existing inequality. Lower income and otherwise disadvantaged groups are at higher risk of being left behind or harmed, as shown by protests in France and Ecuador against green tax reforms that increased transport costs. But they can benefit the most from climate solutions that improve livelihoods, services and human health.

Here are five priorities countries should embed in their climate plans to promote fair transitions. These recommendations will be further developed in an upcoming WRI paper that highlights building blocks and untapped opportunities for social equity in climate action.

Democratic and inclusive decision-making is an essential condition to putting social justice and human rights at the core of climate action. Public participation is key to build consensus on priority actions and make them beneficial for local communities and vulnerable groups. As UN Human Rights Commissioner Michelle Bachelet recalled at COP25, empowering the people most affected by climate change protects a fundamental right and is a very effective way to enhance ambition.

The city of Quito illustrates how participatory planning can lead to more inclusive climate plans. With support from citizen committees, universities and youth climate champions, people from underserved neighborhoods exposed to floods and landslides engaged in designing climate adaptation solutions, such as ecosystem restoration and water harvesting, based on their needs and traditional knowledge. 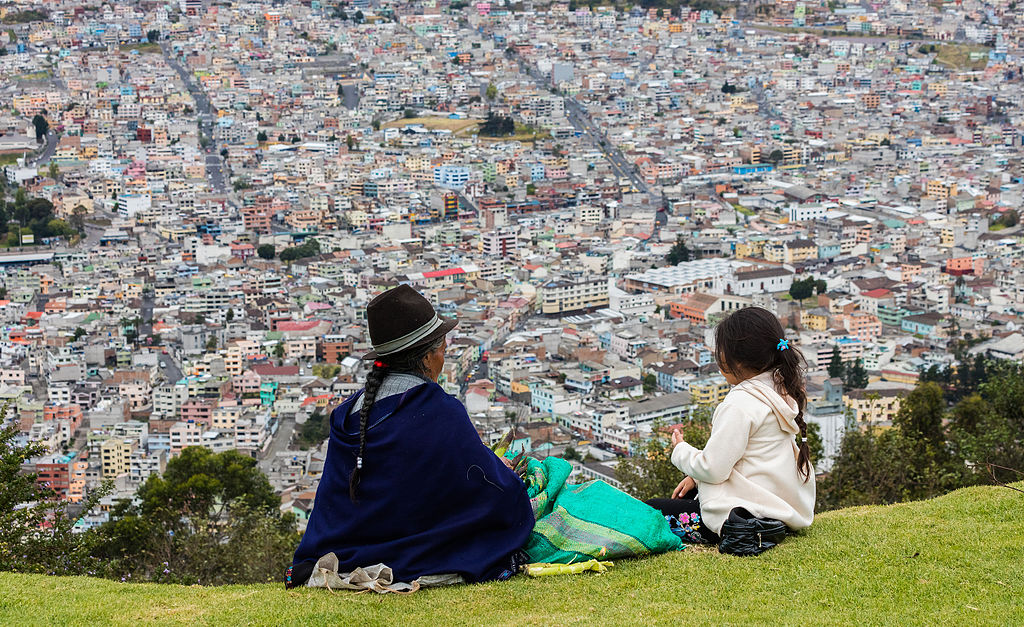 An indigenous woman and girl look over Quito, where the government consulted with residents to include their traditional knowledge in climate adaptation solutions. Photo by Diego Delso/Wikimedia Commons.

2. Improve the Livelihoods of Vulnerable Workers and Small-scale Farmers

While just transition strategies so far primarily focus on helping coal regions transition to greener industries, all sectors need plans that promote equal access to the economic benefits from climate action — up to 65 million jobs and $26 trillion in economic opportunities by 2030.

Countries need legislation to ensure green jobs are decent jobs — providing fair income, safety and social protection while respecting labor rights and social dialogue, as defined for example in the Philippines' pioneer Green Jobs Act. Currently, health risks in green sectors, such as exposure to chemicals in the recycling industry, primarily affect poor and informal workers. Countries can improve working conditions as they adopt circular economy policies, as Brazil's national solid waste policy did with targets to provide 75% of waste pickers with social security while recycling 45% of solid waste by 2031.

Countries should also proactively make green jobs accessible for disadvantaged groups. In the U.S. for instance, jobs in renewable energy and energy efficiency have lower skill requirements and higher wages on average than all other occupations, yet they employ fewer female and black workers. Globally, the share of women in the renewable energy workforce is higher than in fossil fuel industries (32% vs. 22%), but still lower than in the overall workforce (48.5%). The International Renewable Energy Agency recommends anti-discrimination policies and incentives such as parental leave to remove obstacles women face.

Many low-carbon and adaptation solutions, such as off-grid renewable energy, mass transit and efficient water systems, enable countries to expand access to services and improve their quality. Poor, underserved populations who would benefit the most from these upgrades can be left behind: they typically live in remote areas, districts with low tax bases, or informal settlements that attract few investments; they can be disproportionately displaced by new developments and climate adaptation measures because of unfairly enforced land use regulations or higherreal estate prices; and they often face price, safety and other social barriers to access new infrastructure. 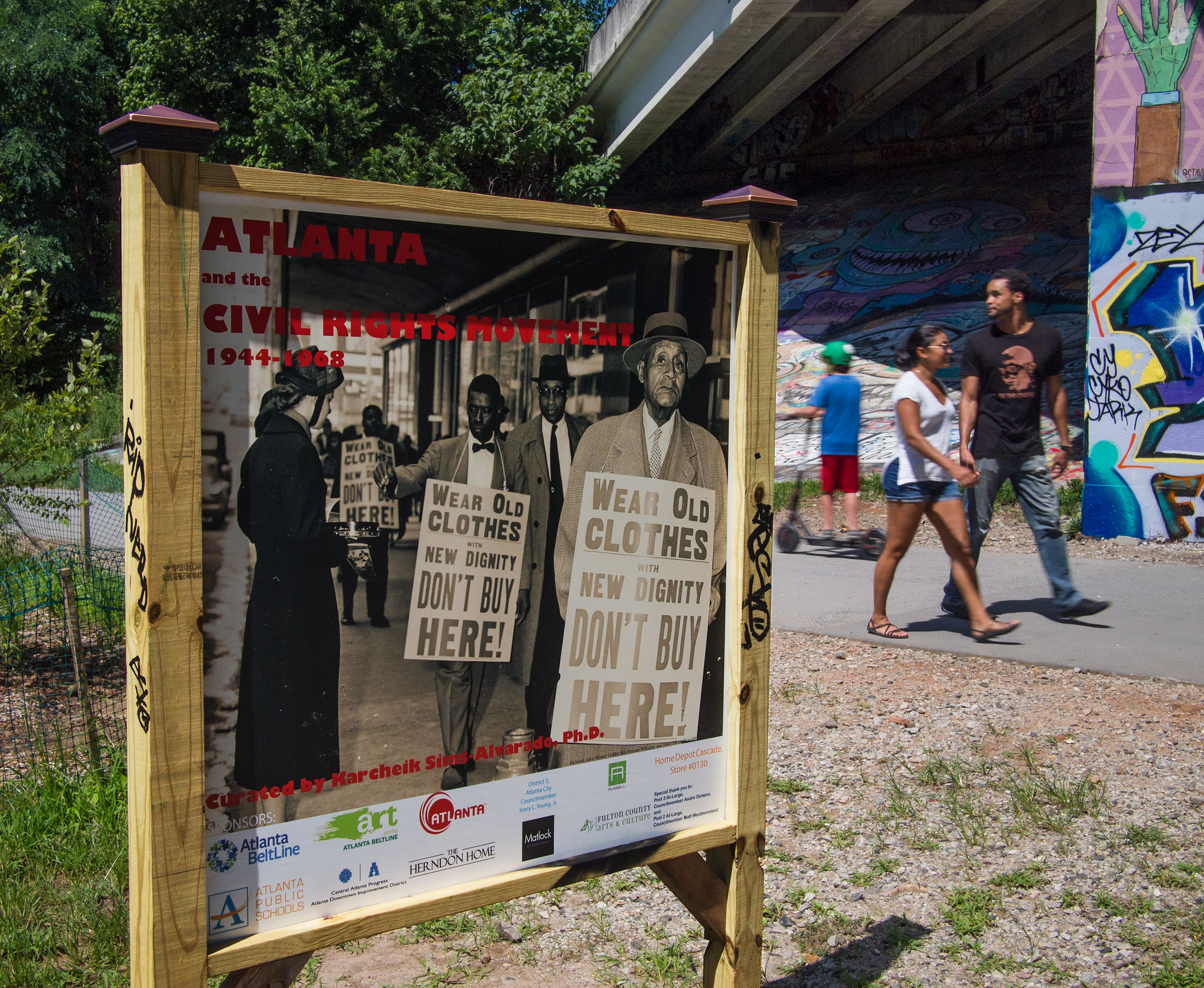 4. Give Low-income Households Access to Cheaper Green Services and Products

However, greener doesn't necessarily mean cheaper for consumers, especially in the short term. Green technologies can come with major up-front costs and disadvantaged groups often face additional barriers. For instance, households suffering from energy poverty usually cannot afford energy efficiency upgrades and cannot easily access incentives because they rent or don't have adequate information. This issue is a top priority for the green deals proposed in the U.S. and Europe.

Programs promoting equitable access to green goods go beyond financial support. In the case of energy efficiency programs, effective strategies incentivize landlords to retrofit their properties, or provide one-stop shops that support households through all the steps of efficiency upgrades. For example, EmPOWER Maryland centralizes the various rebates local gas and electricity utilities provide for appliance and home energy improvements. Since its launch, the program has enabled 29,548 low income households to save $8.4 billion in lifetime energy bills.

Introduced without offsetting measures, fossil fuel subsidy removals and carbon pricingcan be regressive because they increase energy and transportation prices, which represent a larger share of expenditure for low-income households. Yet the revenues these reforms generate — estimated up to $2.8 trillion in 2030 — can support a fair transition.

Just reforms come with compensation for affected households, considering who might be most impacted depending on income and other factors such as location, age and health. Some governments, like British Columbia, opt for redistributive reforms: bigger polluters and businesses pay more than low-income households, who get more in tax cuts than they spend.

As these examples show, the radical changes we need to respond to the climate emergency can overhaul entrenched inequalities — but only if designed that way. As Ursula van der Leyen, President of the European Commission, said during COP25, climate plans should leave no one behind: "This transition will either be working for all and be just, or it will not work at all."