The Japanese government has announced its long-term climate and growth strategy under the Paris Agreement on climate change. The announcement comes ahead of the G20 Summit hosted by Japan this week (June 28-29) in Osaka.

Japan's publication of the long-term strategy is a welcome contribution to the Paris Agreement process. Though it falls short of net-zero emission goals announced by other countries (such as the UK, Sweden and Costa Rica), it does include pioneering business engagement and innovation components. In fact, company actions are at the center of Japan's new long-term strategy to reduce greenhouse gas emissions, making it the first country to provide explicit government support for companies to set science-based targets (SBTs) for their greenhouse gas emissions reductions.

By stepping up with leading mitigation targets, Japanese companies are providing a foundation for the government to set more ambitious policies and regulations, initiating a positive feedback loop in which bold government policies and private sector leadership reinforce each other, and together take climate action to the next level.

Growing Role of Sector- and Company-Level Approaches to Climate Stabilization

Japan notes in its long-term strategy that international climate programs including the Science Based Targets initiative (SBTi) "are becoming more influential, and the Japanese companies need to respond to such initiatives." As such, Japan's response to climate is focused on transitioning to a "decarbonized society" through business-led innovation, a theme articulated by the Japan Business Federation (the Keidanren) and mirrored in Prime Minister Abe's comments earlier this year. Sector emissions goals and science-based targets at the company level advance business-led climate innovation and broader greenhouse gas (GHG) emissions reductions.

Science-based targets are corporate commitments to reduce GHG emissions in line with what the latest climate science says is necessary to meet the goals of the Paris Agreement. Japan's strategy—specifically the long-term strategy sections on industrial sector emissions mitigation and green finance—elaborates on a sector-by-sector approach, emphasizes the concept of value-chain-wide emissions, and promotes the efforts of companies to set science-based targets. These principles reflect the need for global, sector-wide mitigation actions for achieving climate stabilization, especially in the absence of strong policy action from the largest emitting countries. 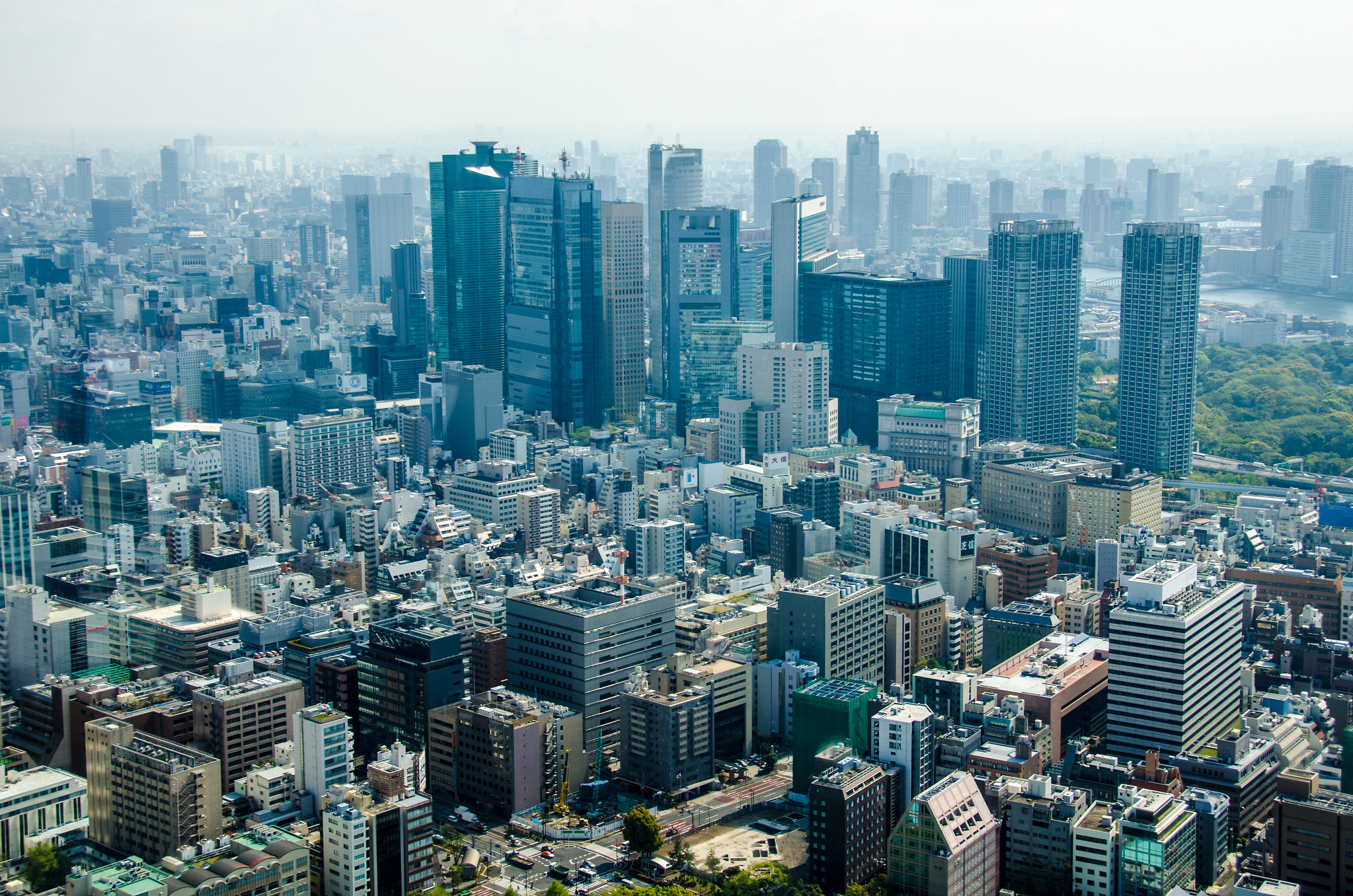 View over Minato, a major commercial district in Tokyo where Sony, Honda, Fujitsu, Mitsubishi and other major companies are headquartered. Flickr/Thomas Buehler

Japan had previously encouraged companies to set scope 1 and 2 GHG targets for use in its voluntary emissions trading scheme (established in 2008). Scope 1 emissions occur within a company's operations as direct emissions from owned or controlled sources. Scope 2 emissions come from purchased electricity, heat, steam, or energy services. A singular contribution of the SBTi is that it requires companies to address their value chains, including scope 3 emissions that come from upstream (e.g., emissions from materials purchased by the company) and downstream (e.g., emissions from the use of a sold product) activities.

How Japan Engages the Private Sector for Climate Action

This is not the first chapter in Japan's push towards SBTs—just its latest. The country has had a Mandatory GHG Accounting and Reporting System for large-emitting companies since 2006. In 2015, Sony became the first Japanese company to set an SBT. Since then, 44 Japanese companies have set SBTs across 18 sectors. In 2017, Japan's Ministry of Environment began supporting Japanese company low-carbon innovation through a dedicated budget that helps companies to set SBTs with the Science Based Targets initiative. In fiscal year 2019 the total budget related to Japan's SBT support program is approximately 150 million yen ($1.4 million). Companies apply to the Ministry of Environment; if they are selected, they receive one-on-one SBT advice from consultants. After initially focusing on large companies, the program has expanded to small- and medium-sized firms.

The program has been very effective at growing the number of Japanese companies with approved SBTs. In 2018, Japan became the first country with a chemical sector company SBT. Japan has traded places with the United States throughout 2019 as the country with the largest number of companies with approved SBTs and clearly leads in the number of high-emissions companies. By the end of 2020, the Ministry of Environment aims to have at least 100 approved Japanese company SBTs. 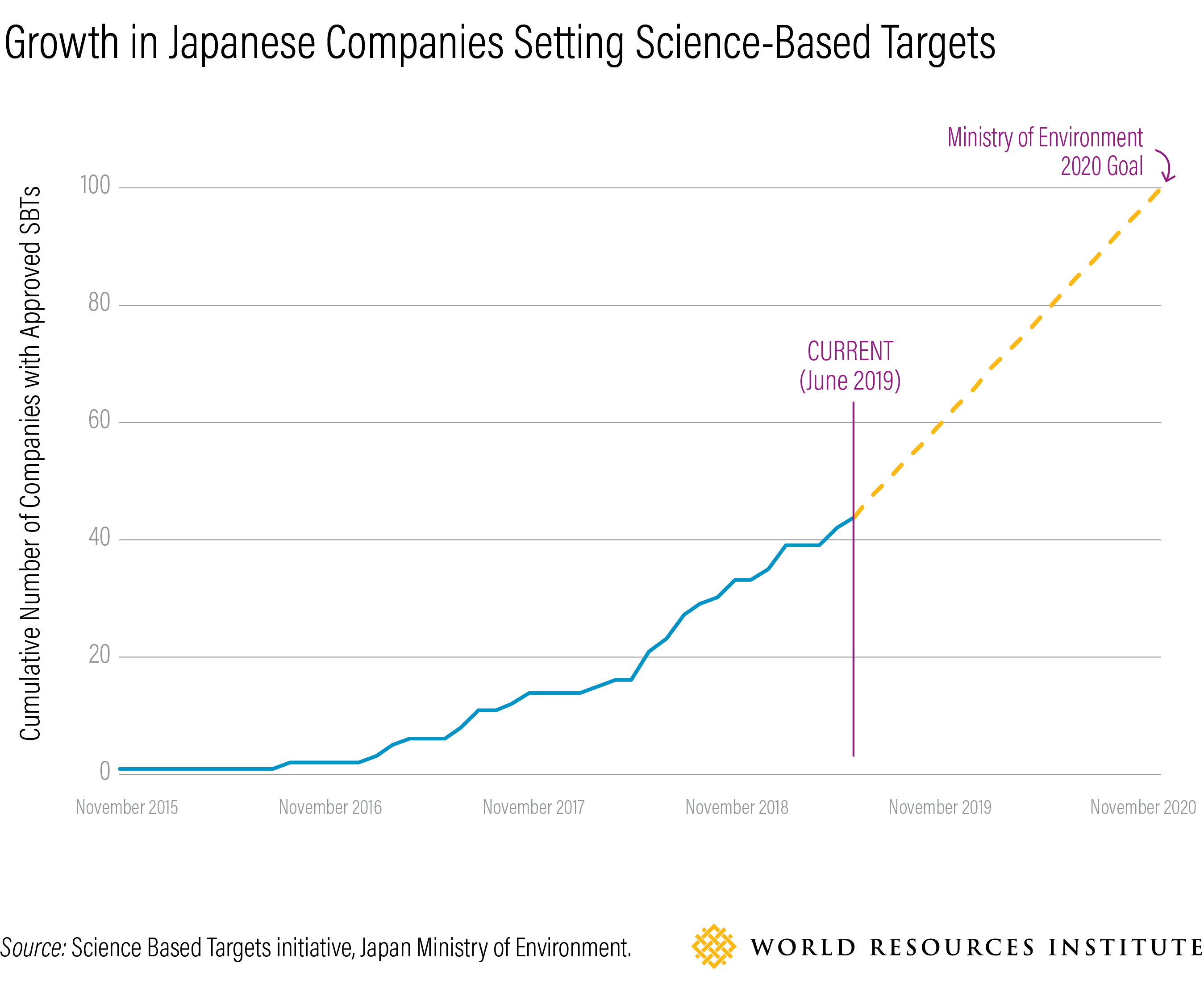 Japan's private-sector engagement on climate goes beyond SBTs. Based on the success of the SBT program, the Ministry of Environment has broadened its company support to include company participation in RE100–a group of companies that commit to be powered 100% by renewable energy—and development of company disclosures as recommended by the Task Force on Climate-related Financial Disclosures (TCFD). Rising investor pressure is starting to turn these initiatives into sources of competitive advantage for companies. In 2019, Japan's Ministry of Economy, Trade, and Industry (METI) and the Ministry of Environment released supporting guidance for Japanese companies to join established international initiatives including SBTi. On the international stage, Japan's focus on business-led engagement and innovation is reflected in its Partnership to Strengthen Transparency for co-Innovation (PaSTI), among other initiatives.

Japan's efforts at company engagement can be straightforwardly replicated in other countries seeking to kickstart the transition toward ambitious long-term climate goals. Since the SBTi incorporates criteria that cover the IPCC's 1.5 report, countries can future-proof their companies' growth by following Japan's example.

In the decentralized and bottom-up world of post-Paris Agreement governance, country-level targets for company SBT development can be part of a politically-viable approach to spurring business and industry action that supports achievement of national climate targets. Company climate engagement and supporting policies (such as the renewable electricity feed in tariff) are two components in Japan's ongoing transition to a decarbonized society, which is also reflected in the country's reduction of its energy-related carbon emissions by more than 10% from their peak in 2012 to 2018. 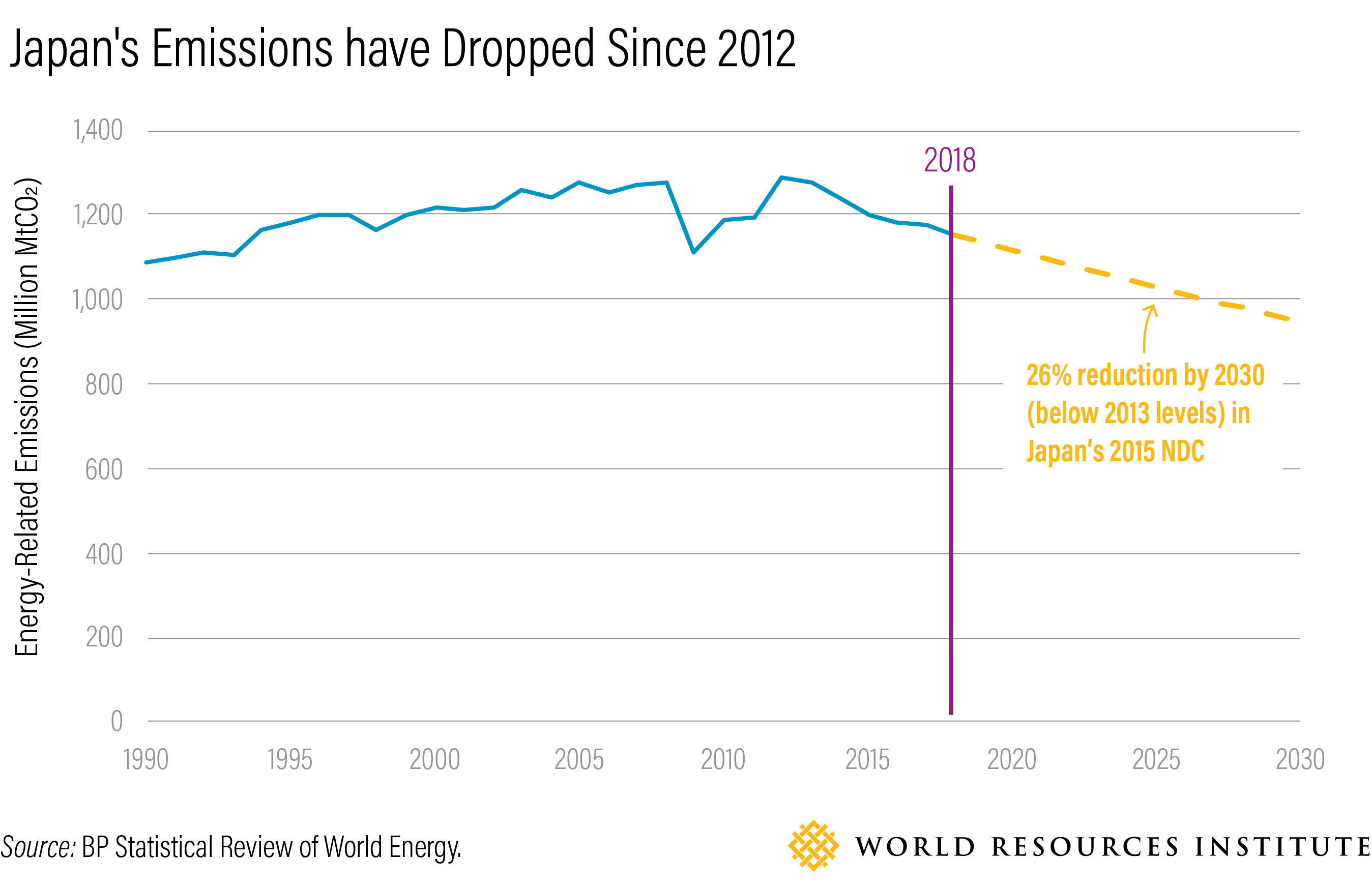 The theory of change behind engagement programs such as SBTi is that a critical mass of leading companies can define emerging best practices for GHG target setting, spur action through global value chains, and fortify ambitious government mitigation policies. The race-to-the-top aspect of Japan's climate policies and long-term strategy is a positive driver of innovation, but it cannot supplant regulatory approaches to laggards and obsolete facilities.

Japan's pursuit of global SBT company leadership raises the question of when and how company targets will translate into more ambitious government mitigation policies. The country's climate tipping point is yet to be identified, but the LTS development process indicates it will likely be linked with industry associations and companies across the private sector. Meanwhile, company engagement and innovation are essential components of transition, but they are not sufficient for global climate stabilization. To stabilize the climate, we need policies that support companies in achieving reductions and address stragglers and adverse impacts. A full range of complementary voluntary and mandatory approaches can address both ends of the performance spectrum and catalyze ambition feedback loops between national governments and the private sector.