Home > Blog > Serious About Sustainability? Some Progress, But Not Yet Persuaded by BlackRock's Efforts
Comments
|
Add Comment
|
Print
Tweet

With nearly $6 trillion in assets under management, BlackRock is the largest asset management firm and one of the most powerful investors in the world. The firm manages a sum of capital that exceeds the market capitalization of all but two of the world's stock exchanges. So when BlackRock CEO Larry Fink asserted in his 2018 annual letter to CEOs that companies must make positive contributions to society and acknowledged his firm's responsibility to encourage this shift through engagement with those companies, it turned a few heads, including ours.

In response to this letter, we outlined a handful of areas where we would expect to see change if BlackRock was to deliver on Fink's aspirations. A year later, we've noticed some encouraging signs of progress—but much of this action is happening on the margins of the firm's core business. If BlackRock is going to promote the kind of systemic shift that Fink's 2018 letter suggested, there's still much work to be done. In this blog, we identify several areas to which BlackRock should turn its attention next.

Where Has BlackRock Progressed? 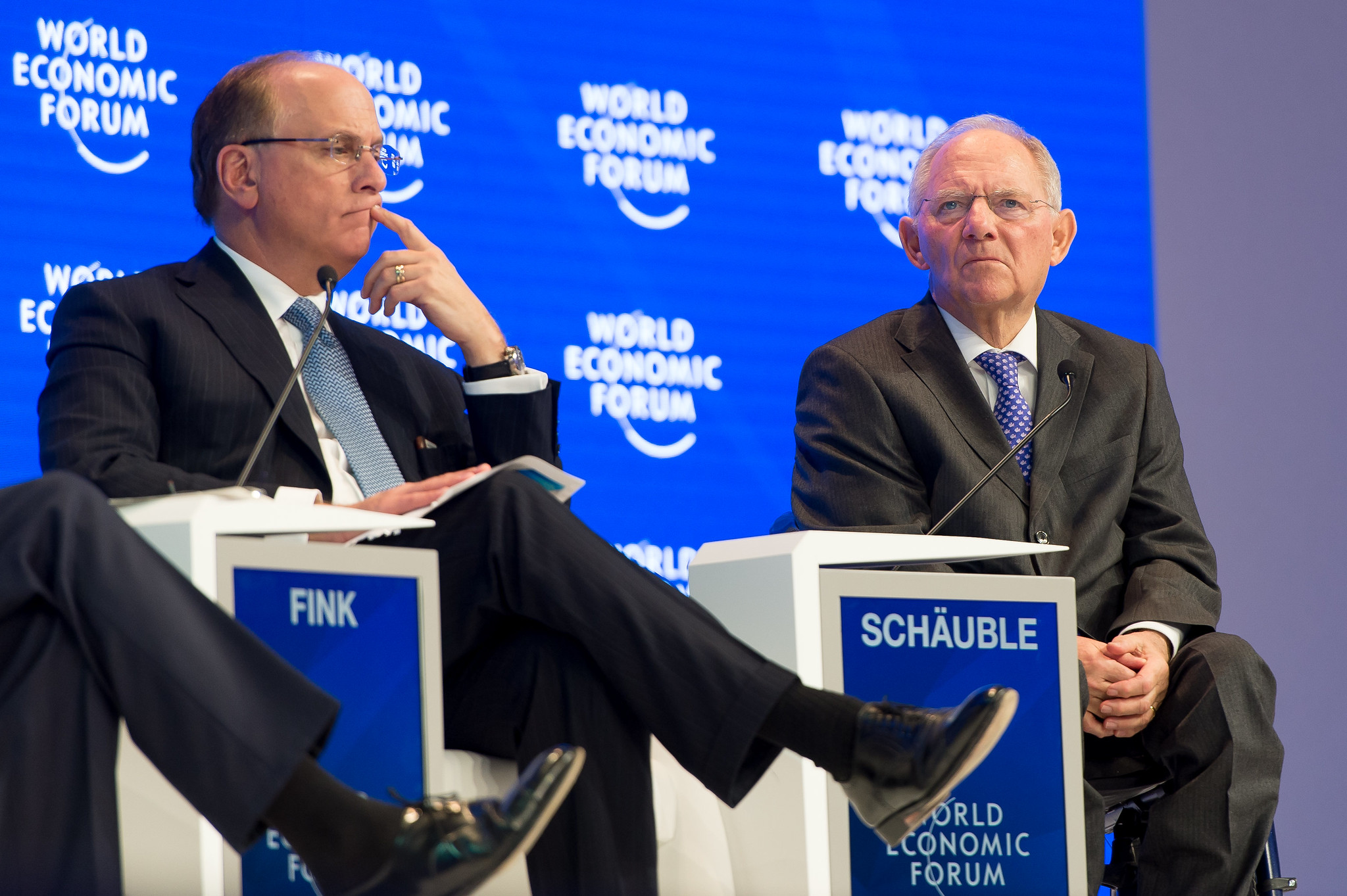 Over the past year, BlackRock has introduced a variety of new sustainability products, both in actively managed portfolios and in passively managed indices. Here's a sample of these funds (domiciled in the U.S. and elsewhere):

Within U.S. domiciled funds, we've noticed a modest increase in the number of sustainable investment funds over the past year, and a slight decrease in overall funds (see figure). 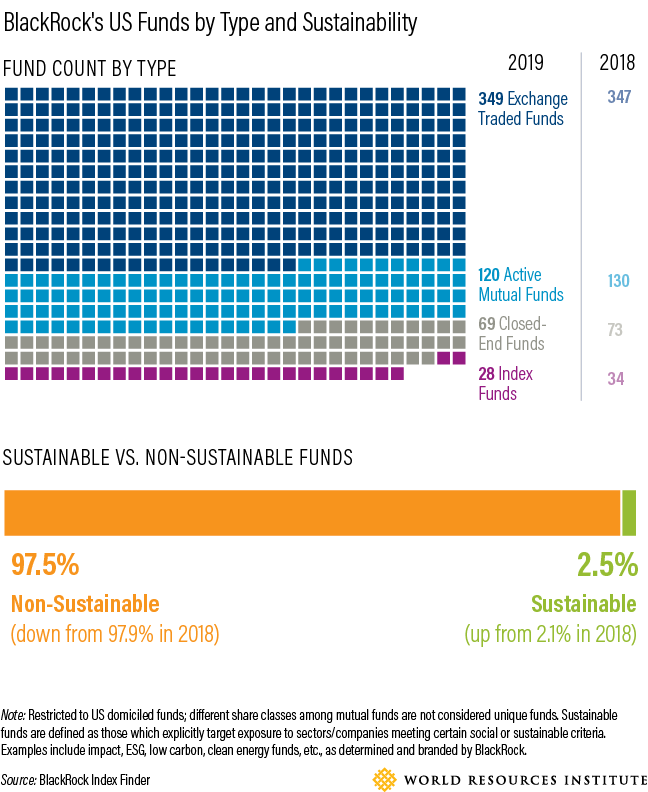 BlackRock has also been doing groundwork to advance Fink's vision for more effective shareholder engagement on sustainability issues. In January, the firm published updated proxy voting guidelines and updated commentary on its engagement approach to climate risk, both of which outline clearer disclosure expectations from companies on climate risk. In the last year, BlackRock engaged with over 200 companies on the issue, which is encouraging given the potential for shareholder engagement to advance climate action.

BlackRock has made a firm-wide effort to provide clients across the entire investment process with access to improved ESG data and analysis. The firm now discloses ESG and carbon intensity metrics for all ESG ETFs on its iShares (BlackRock's ETFs) website. Data for the non-ESG funds has been rolled out too, which supports the idea that sustainability is an important factor in all investments, not just those specifically designed and marketed around the concept.  The firm has also launched an ESG portfolio analyzer designed to help financial advisors and institutional clients build sustainable investment models and improve understanding of ESG risks and opportunities.

On the research side, BlackRock recently published a report that offers valuable insights for managing climate-related investment risks, a potential boon for investors who consistently underprice climate change.

Where Does BlackRock Continue to Fall Short?

While BlackRock has made some notable progress in the above areas, change has been lacking in others. Indeed, sustainability has yet to be mainstreamed into the firm's core business practices.

To be sure, Fink believes there are better ways to engage with companies than through proxy voting. But even as it engages firms privately, BlackRock is voting on shareholder resolutions.  When it comes to climate change, its voting practices are among the worst in the fund industry. BlackRock supported only 10% of 2018 climate-related shareholder proposals. Only five firms supported less. There are also examples of situations where the firm's voting practices appear to conflict directly with the sustainability mandate of a fund. For example, BlackRock's Impact US Equity fund voted against three resolutions demanding improved greenhouse gas (GHG) disclosure last year, even though carbon intensity is one of the fund's priority impacts.

In terms of direct engagement, BlackRock is still notably absent from the Climate Action 100+ initiative, a network of over 340 investors with $32 trillion in assets under management.  The network engages the world's largest GHG emitters to take necessary action on climate change. Because of its size, BlackRock may have little incentive to coordinate with other investors on stewardship. But given the scale and urgency of the climate change threat—and Fink's 2018 letter—this may be a situation where the firm should consider joining a coalition. Working as part of a group would only magnify BlackRock's shareholder power and help it implement the change it wants to see.

Among U.S. asset managers, BlackRock has the highest absolute holdings in thermal coal and oil and gas reserves, through its investments in companies. It is also the world's largest investor in companies that are building new coal power capacity, with $11 billion invested in such companies. InfluenceMap found that BlackRock's funds are the most "coal dense" among its peers---its funds have the highest tonnage of thermal coal per million dollars of assets under management. According to their research, the coal density of BlackRock's funds is 50% higher than the benchmark average for 60,000 listed funds.

To be fair, this exposure is driven by BlackRock's passive funds that track various traditional indexes. But there are several things BlackRock could do. For example, the company could stop offering products that track indexes with high carbon footprints, such as the iShares Select Dividend ETF and the iShares MSCI Germany ETF. While that may be unlikely so long as clients demand those products, BlackRock could at least stop including products with high carbon footprints compared to benchmarks among its "sustainable" offerings, as is the case with, for example, its iShares Global Clean Energy ETF and iShares MSCI EAF ESG Optimized ETF. It also could support the climate shareholder resolutions that aim to make these companies more sustainable.

3. Some "sustainable" funds are not really sustainable

Even BlackRock's "sustainable" investment funds contain shares of fossil fuel companies. Some of its ESG funds hold companies that own reserves with some of the world's highest carbon-emissions potential, such as ConocoPhillips and Hess Corp. Also, some of BlackRock's "low-carbon" funds invest in fossil fuel companies. For example, the iShares MSCI ACWI Low Carbon Target ETF has about 2% of its assets invested in 15 companies on the Carbon Underground 200 list (the top 200 owners of coal and oil/gas reserves).

This raises a bigger question: Do fossil fuel companies belong in ESG or low carbon investment funds at all?

To be fair to BlackRock, fossil-fuel company shares in ESG and low-carbon funds is not an anomaly in the industry. Also, the question is more nuanced than it first appears. Some oil majors are investing in renewable energy and positioning themselves to adapt to the transition to a low-carbon economy. A few European oil majors, for example, have embraced low-carbon investments more warmly than their American counterparts. If fossil fuel companies are to be included in sustainable investment funds, these important distinctions should be reflected in the inclusion criteria. Yet, this is not always the case with BlackRock funds. For instance, iShares ESG MSCI EM ETF has a higher carbon footprint and carbon intensity relative to its benchmark.

For a financial behemoth like BlackRock, changing course and pushing against the tide of market norms is no easy feat, to be sure. We would never expect this to happen overnight. But we have yet to see a systemic shift in how the firm approaches sustainability. In the year ahead, BlackRock should provide evidence that it is integrating sustainability into its core practices. If it does so, BlackRock will be able to use its size and influence to promote the shift to sustainability the world so urgently needs.