Some schools in Dar es Salaam, Tanzania see more than a dozen of their students injured or killed in road crashes every year. Haphazard development in the nation’s capital paired with a growing number of vehicles have created dangerous conditions for children walking to and from school.

Ayikai Charlotte Poswayo and her team want to change that.

Poswayo is a program director with the non-profit Amend, where she leads the School Area Road Safety Assessments and Improvements (SARSAI) project. SARSAI, which recently won the WRI Ross Prize for Cities, installs pedestrian crossings, footpaths, speed humps and other safety measures on roads near high-risk schools, and then educates children about road safety. So far, SARSAI has helped more than 38,000 students in Dar es Salaam alone. 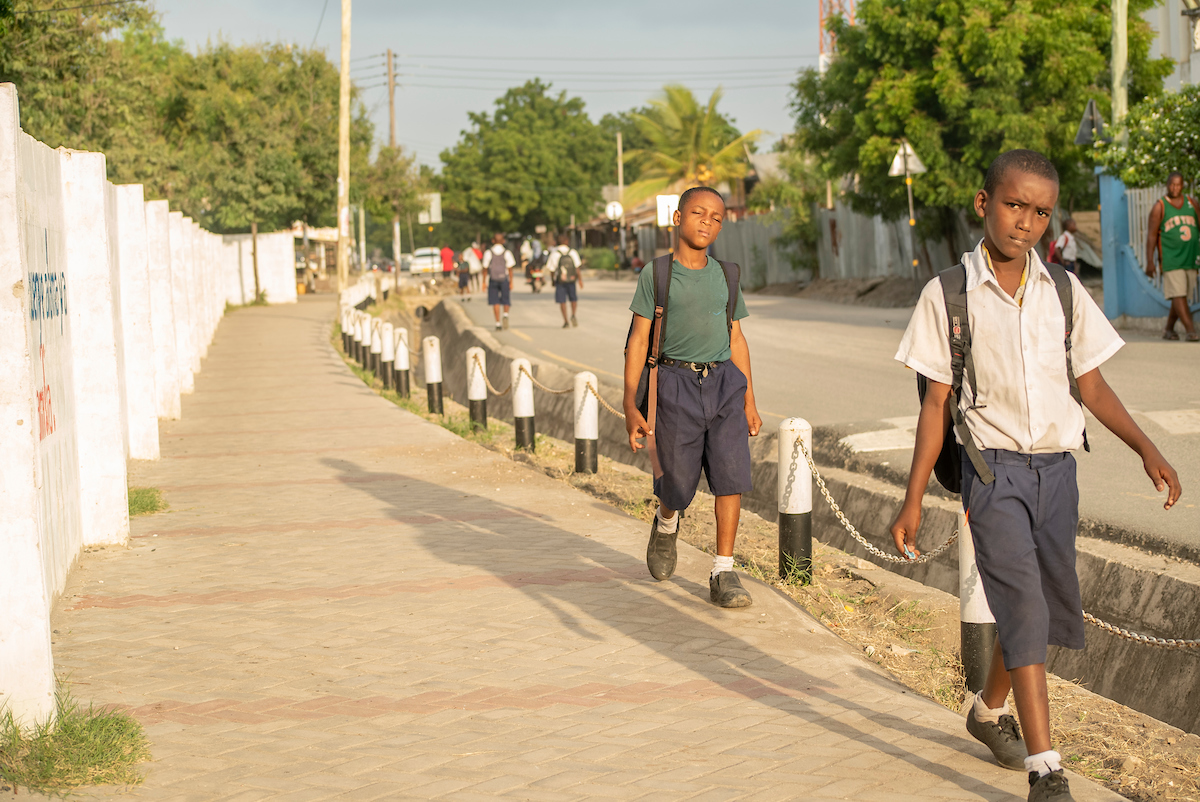 SARSAI’s effective approach is no doubt due in part to Poswayo’s multi-disciplined background. She spent years as a civil and traffic engineer in London, doing traffic modeling and designing things like intersections and traffic signals. But she felt like something was missing.

“Especially when you’re stuck in an office and focused on the figures, you forget the people who are actually going to use these facilities,” she said.

Poswayo always had an interest in education, so she took a Montessori training course while still working her engineering job. “I wasn’t sure what I was going to use it for, but I did it anyway,” she said.

The answer presented itself when she saw two of her future Amend colleagues present the organization’s work at a conference. “It was just perfect for me, because it brought together engineering, child education and communities,” she said.

Four-and-a-half years since Poswayo joined Amend, SARSAI has spread to nine other cities in sub-Saharan Africa. We caught up with Poswayo to learn more about SARSAI’s work and impact: 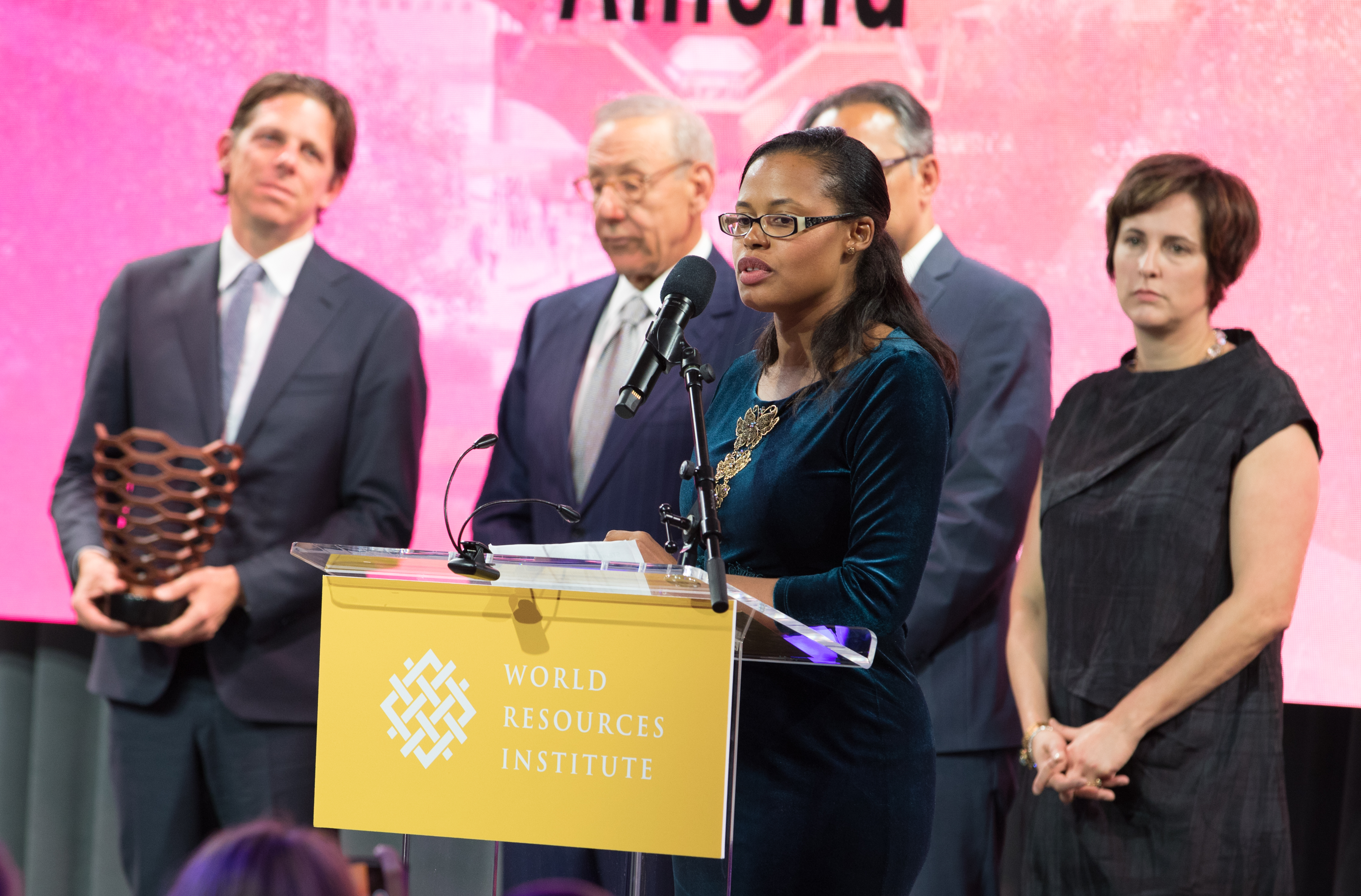 Ayikai Poswayo (AP): It’s the fact that we have not planned and designed our cities for use by children. In lots of these cities, the majority of children walk to school, and they do so alone. Walking in itself is a great thing. It’s something we want to promote. But unfortunately, we have not provided the infrastructure to enable that to be done safely.

You’ll find a school right next to a major highway, which a child needs to get across to get to school every day. You will find roads that do not have any facilities for pedestrians. [Kids] are in close proximity to vehicles going at speeds incompatible with a child who is walking. You shouldn’t have in the same space a vehicle going at more than 30 kilometers per hour and a pedestrian, and certainly not a child pedestrian. Unfortunately, we have this exact situation in many places in sub-Saharan Africa. 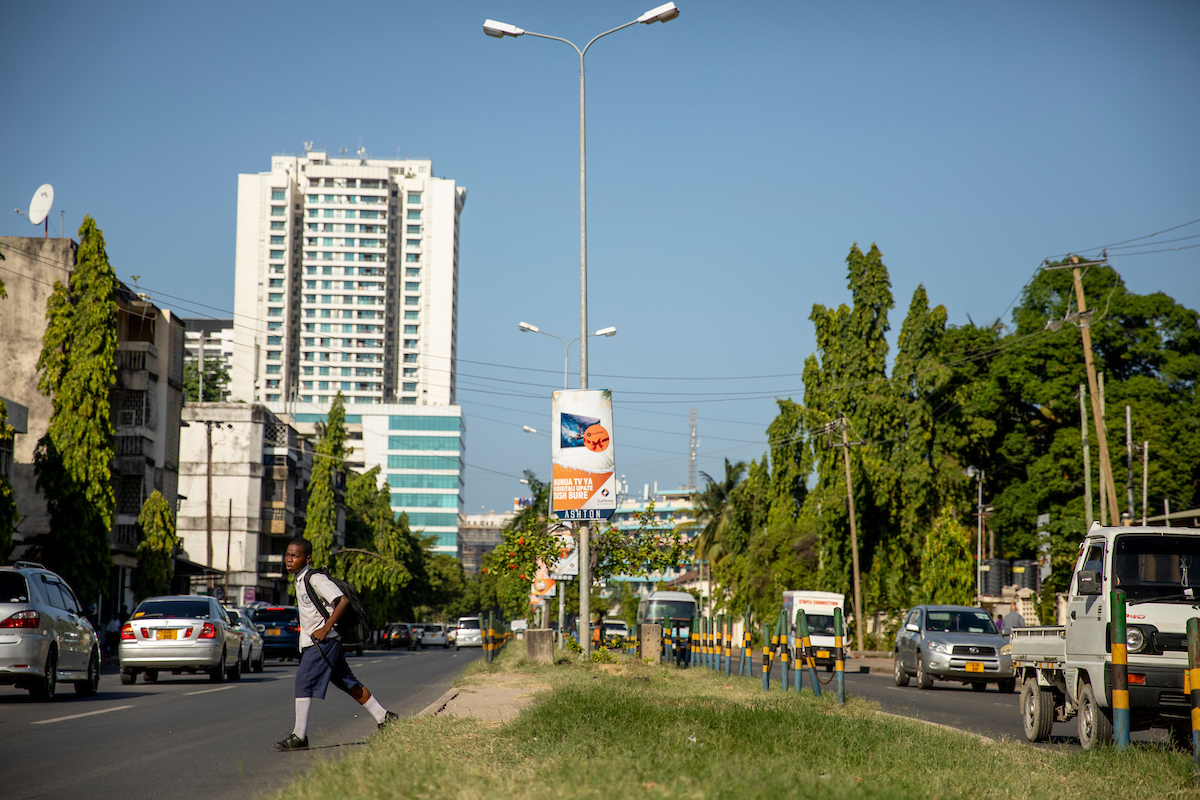 A child crosses a busy road on his way to school in Dar es Salaam, Tanzania. Photo by Kyle Laferriere

AP: Each country is very different, but sub-Saharan Africa in general has quite a deficit when it comes to infrastructure. There is pressure on governments to provide as much infrastructure as possible. In doing that, they tend to leave out other aspects like facilities for pedestrians and cyclists. Perhaps it’s thought that it’s better to get 100 kilometers of road than put in 50 kilometers of road that has all the other accompanying facilities to enable safe use by all road users.

Maybe it’s also because road traffic injuries are a public health issue, but also an engineering issue, an enforcement issue, an education issue. It’s one of those things that nobody sees as fully their problem. So that creates a situation where nobody is taking complete responsibility for it and doing something about it. Whereas maybe with, say malaria, it’s clearly a public health issue. With road safety, it’s so multifaceted that it just slips between the cracks.

SP: Given that governments are under pressure to build more infrastructure quickly, how have you been able to work with stakeholders to make existing roads safer?

AP: In terms of receptivity from government officials and stakeholders, they’re generally receptive. The challenge in many cases is that there are no government policies in place to support safe school zones, so they are not prioritized or even thought about. This then means no or very little government infrastructure budget is assigned to providing safe infrastructure around schools. When we (the SARSAI team) show up with the ideas and the financial resources, government agencies almost always give us the permission to implement measures that could save children’s lives.

In the long run, a road safety NGO can’t provide safe infrastructure for all schools in sub-Saharan Africa. In order to make sure that a program like SARSAI is scaled up and that all children are given access to safe infrastructure to get to school, it needs to be promoted and done by government. We are currently working really closely with governments in trying to bring attention to the issue and help them realize road safety for children is an issue that needs to be prioritized. 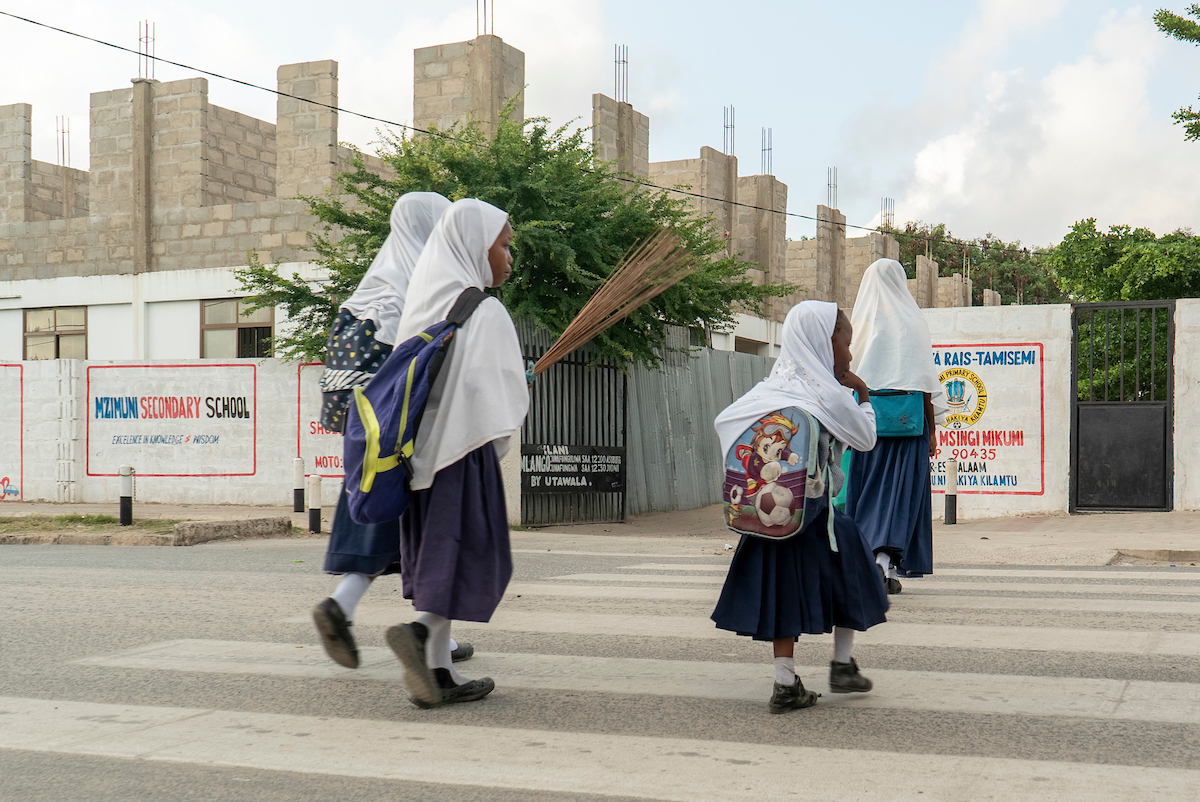 SP: Have you seen any progress from governments?

AP: Little steps. But little steps are good because it shows that we are moving forward. The city of Windhoek, Namibia has agreed to reduce the speed limit around all schools from 40 kilometers per hour to 30 kilometers per hour. And in some countries, the laws are there for reduced speed limits and safe infrastructure around schools. But now we’re trying to work with governments to see how those can actually be implemented.

SP: One thing that’s unique about SARSAI is your data-driven approach. Tell me about that.

We collect data on the number of road traffic injuries in the school population, as well as data like: Where are the children coming from? How many of them are walking? Where do they cross the road? What are the number of vehicles in that area, and what are the speeds of those vehicles? We collect all this data to help us focus.

Finally, we also collect data to help us evaluate what we’ve done. We carried out a population-based scientific study that measured the impact of this program in Tanzania to help demonstrate to governments and other people that this is an important issue—an issue that can easily be addressed with low-cost infrastructure. Data is very helpful with the advocacy piece of the program. 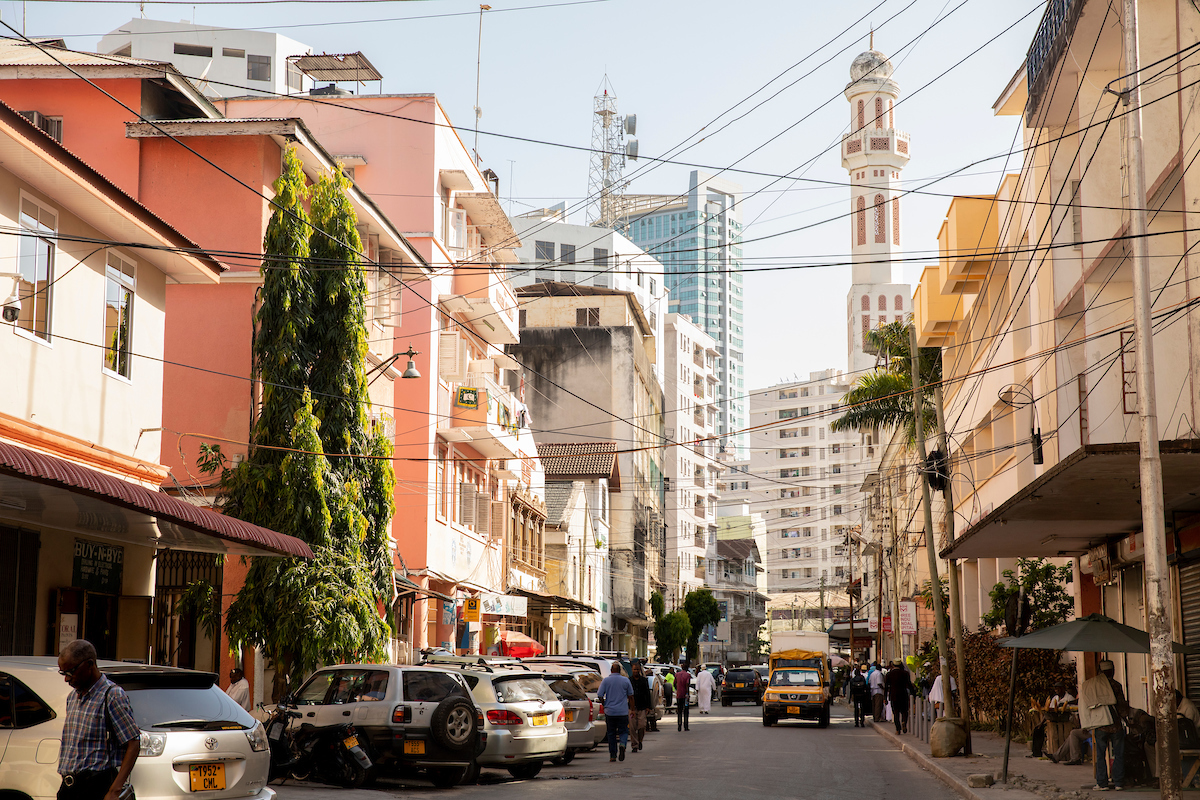 Cars and pedestrians intermingle on a street in Dar es Salaam. Photo by Kyle Laferriere

SP: One of the obvious benefits of this project is making children safer. What are some of the benefits you see in the broader community?

AP: We hear a lot of positive feedback from communities who live around schools. They say, “Oh we use the infrastructure as well. We are safer on the roads as well.” The numbers go beyond the children.

We like to believe that the infrastructure also gives government officials and departments the opportunity to see things and think in a different way. Perhaps they will think “Ok, maybe we could be providing these sorts of facilities outside other schools.” If they have another roads project, hopefully they will have that at the back of their minds.

SP: In your four-and-a-half years with SARSAI, what is the most surprising thing you’ve seen?

AP: The fact that children are getting killed and injured on roads, and nothing seems to be done about it. It’s just one of those problems that is there, but somehow very systematic steps are not necessarily being taken to address the issue. It’s the fact that this issue is so serious, but it seems to be overlooked. The number of road traffic deaths among young people surpasses other public health issues like malaria and HIV/AIDS that get so much more attention in sub-Saharan Africa. 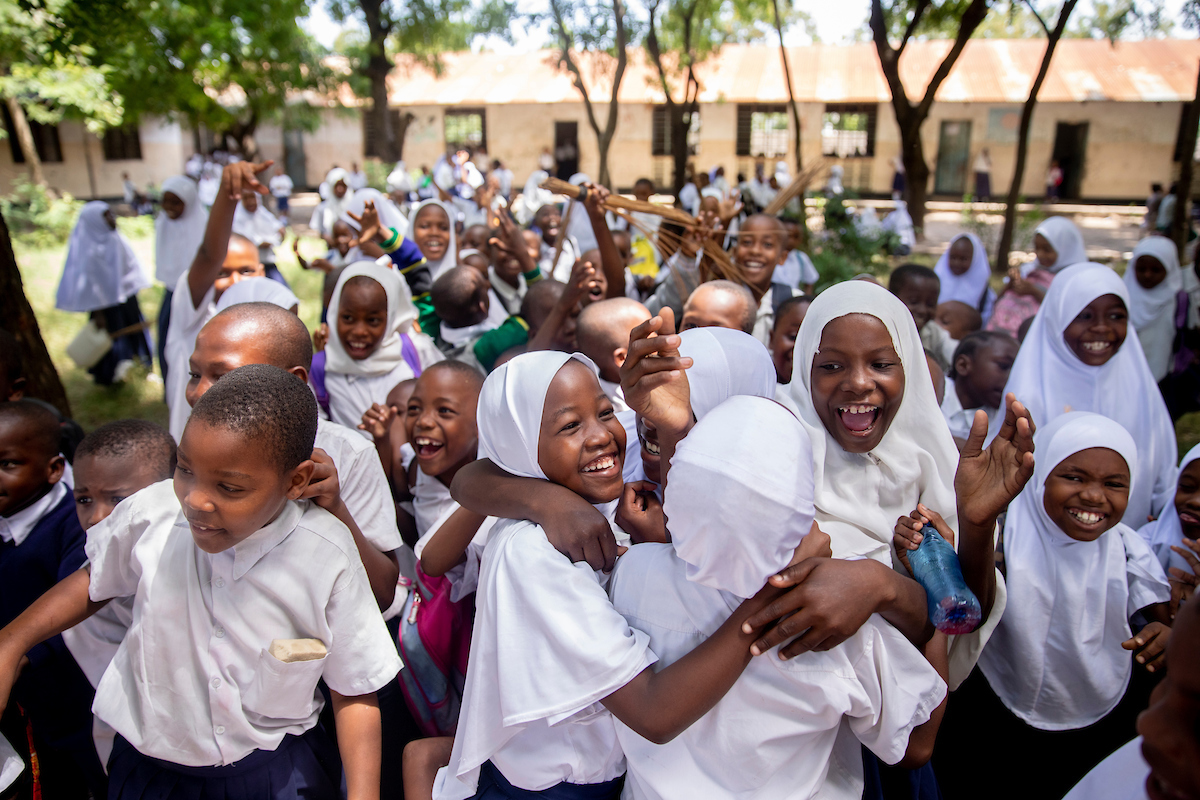 AP: To get more governments involved, engaged and actually doing what we’ve been doing in a systematic way. The WRI Ross Prize for Cities creates a really fantastic platform for being able to make more noise about this issue—and hopefully that will result in more people within countries taking ownership of it. Because for child safety on our roads to improve, it needs to be owned by the countries and governments who should be ensuring this.

SP: You’re a mom now. Do you feel like that’s changed your perspective in doing this work?

AP: Oh definitely. I’ve always loved children, but then when you have your own child, you see and feel things in a different way. You suddenly start to think, “Oh my goodness, I can’t even begin to imagine if something should happen to my child.” And you also begin to really appreciate more what families whose children have been involved in road crashes actually go through. You realize how devastating and life-changing it can be for families. I would say having a child of my own makes me apply myself more passionately to this work.

Learn more about Amend and the WRI Ross Prize for Cities.