This year marks the first replenishment of the Green Climate Fund (GCF). As the GCF spends down its existing funds, its coffers need a refill. Essential for mitigating and adapting to climate change, the GCF channels much-needed finance to support climate action in developing countries.

Since starting operations in 2015, the GCF has allocated $5 billion to 102 projects and programs, including support for clean energy, coastal protection, flood management, and climate resilient livelihoods for vulnerable communities. The fund plays an important role in catalyzing systemic or transformational change to move towards a low-emissions and climate-resilient  future. It is critical that the fund have resources to continue its important work.

Replenishing the GCF's resources is central to the "grand bargain" at the heart of the Paris Agreement: Developing countries join developed ones in cutting emissions, and developed countries support mobilizing resources to help poorer nations pay for climate action. The Agreement reaffirms a commitment by developed countries to mobilize $100 billion in climate finance per year by 2020, and the GCF is a critical part of meeting that goal. These countries must demonstrate their support to the Paris Agreement by making ambitious financial support available to GCF.

This week, governments and other key stakeholders are gathering in Oslo for a formal meeting of the GCF to discuss many issues, including the strategic direction of the fund and its performance so far. But the big question on everyone's mind is: What should be the target for replenishment, in dollars and cents?

Let's shed some light on how governments could approach this question.

How Governments Pledged Money in The Start-Up Phase

In November 2014, contributor governments pledged a total of $10.3 billion to the GCF as part of the so-called the "Initial Resource Mobilization." Pledges were based on discussions between potential contributors, representatives of the GCF Board and GCF management. The discussions did not lead to an agreed contribution target, though some stakeholders floated a target of $10-15 billion.

Twenty-three developed-country governments contributed the bulk of the total pledges. Several developing countries also contributed, though they did so on a voluntary basis.  As such, those contributions do not count towards the $100 billion climate finance mobilization target.

Ultimately, individual country pledges were not based on a rigorous methodology. Rather, they were set, more or less arbitrarily, by each individual contributor based on the politics of the time. As such, the $10.3 billion that resulted in the end was, while a good start, more accidental than the product of a deliberate and transparent logic.

A Fairer Way to Calculate Shares

Last year, WRI launched a new tool, the GCF Contributions Calculator 1.0. The calculator allows users to enter a total replenishment target and then calculate contributions to the GCF on a country-by-country basis. The calculation is based on an objective and transparent methodology described in a working paper Setting the Stage for the GCF's First Replenishment. We proposed a formula to calculate a "scaled indicative minimum threshold" (IMT) to encourage contributors to provide funding at a comparable level to their peers.

The point of the IMT is to ground contributions on the well-established philosophy that the "polluter pays." For this reason, contributions to the GCF based on the IMT formula reflect the size of a country's economy and its current and historical greenhouse gas emissions. It also gives credit to those countries that have reduced their per capita emissions.

Now, as we approach the GCF's first replenishment, contributing governments have an opportunity to be more intentional and transparent about a collective replenishment goal. There are several ways they could do so, laid out below as well as in a GCF Contributions Calculator 2.0.

Scenarios Based on the Ambition of Current Announcements

One approach is to base the overall replenishment target on the trend set by two ambitious countries that have already announced their intention to pledge. In late 2018, Germany and Norway announced their intent to double their 2014 contributions to €1.5 billion ($1.8 billion) and NOK3.2 billion ($413 million), respectively. We have created a new version of our web tool GCF Contributions Calculator 2.0 to display three possible scenarios based on these announcements.

How much should countries contribute if they all behaved like Germany or Norway?

Replenishment total:  $22.5 billion, or $14.1 billion without the United States

Here, we also assume that countries double their contributions, but this time everyone is—in relative terms—at least as ambitious as Germany. We assume that Germany's announcement of €1.5 billion is equal to 8.65 percent (their IMT) of the total value. (We convert Germany's announcement into U.S. dollars and then calculate the total.) This value is then used as a basis for calculating contributions from the fourteen countries which were less ambitious than Germany in 2014. The other eight countries—who were at least as ambitious as Germany in 2014—are assumed to double their GCF contribution.

Replenishment total: $23.9 billion, or $14.5 billion without the United States

This approach is similar to the German scenario, but we use Norway's number to calculate a replenishment total. Norway's announcement is relatively high when compared with others of similar responsibility and capacity; only Sweden had a higher level of ambition than Norway in 2014. As a result, using Norway's announcement as a base leads to a much higher replenishment level. It also means that all countries except for Sweden would have to do more than double their first pledge—and apply their IMT—to be as ambitious as Norway.

Replenishment total: $66.5 billion, or $36.2 billion without the United States

Scenarios Based on Demand

Another approach is to set a target based on the financial need of developing countries. To date, there is no comprehensive assessment of developing country needs, though the UN climate convention's Standing Committee on Finance will produce reports on this every four years, starting in 2020, which could inform future replenishments. For now, one could use requests for GCF support as a crude signal of demand for finance. If we assume that the GCF will fund all its current requests, this would suggest a replenishment total of $15 billion. 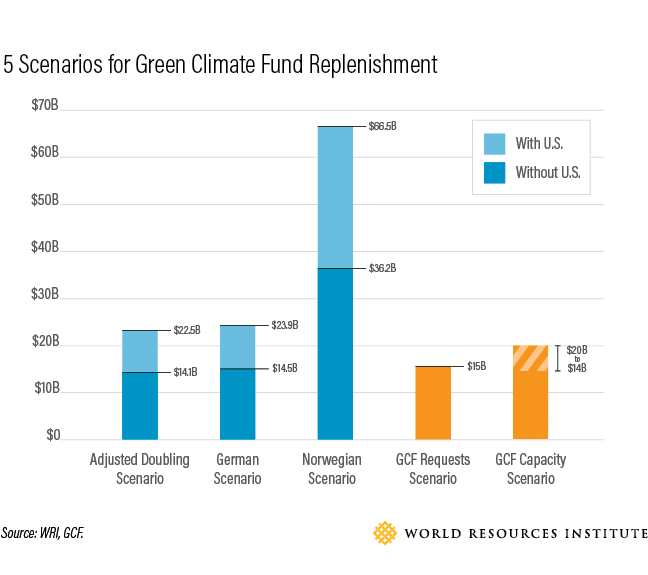 Whichever scenario and methodology are used, the first replenishment must result in an ambitious outcome. In addition to developed countries, other groupings of nations could—on a voluntary basis—contribute to GCF's capital as well; 17 developing countries did so in 2014 and this could be amplified in 2019.

The Paris Agreement demands ambition, and the need for urgent action was reconfirmed in IPCC's 1.5 report. A strong GCF replenishment is an important step towards achieving the Paris goals.