While virtually all countries have national climate plans, in many cases it’s not clear what effect they’ll have on emissions.

One hundred and ninety-four countries submitted Nationally Determined Contributions (NDCs) as part of the international Paris Agreement on climate change. We analyzed these plans and visualized them alongside countries’ historical emissions on the Climate Watch open data platform, where you can also compare countries’ NDCs in detail.

We found that NDCs from 67 countries—collectively responsible for 44 percent of the world’s emissions, including the three highest emitters—lack the full information needed for calculating how their plans will affect their country’s future emissions. This lack of transparency makes it harder to track national progress, hold leaders accountable, or assess what level of warming the world is on track to endure.

Not All Emissions Targets Are Equally Transparent

Of the 194 countries that submitted NDCs, 157 included greenhouse gas reduction targets. Yet there is significant variety in how these targets were communicated, which can make it difficult or impossible to calculate what their emissions will be in 2030. We identified five types of national targets: 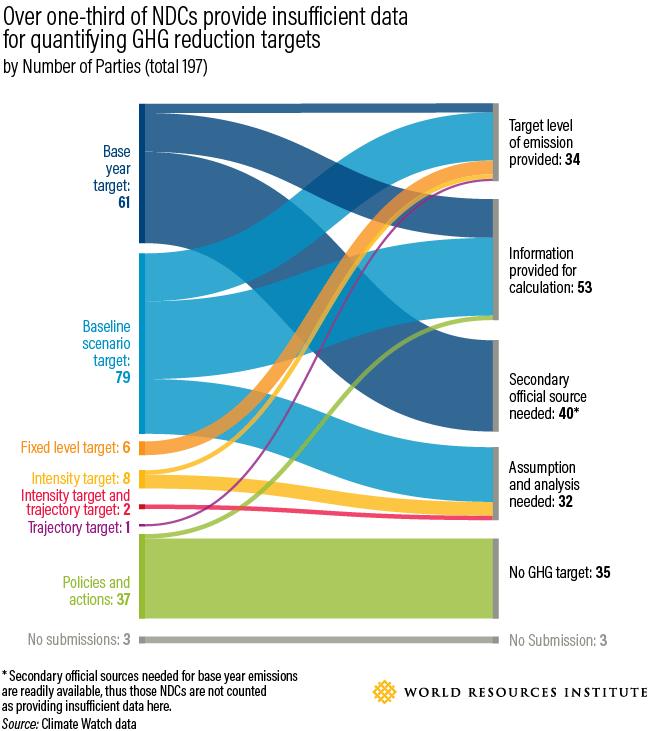 Thirty-two countries do not provide enough information in their NDC to calculate what their plans really mean for 2030 emissions. In such cases, we made assumptions to quantify targets when feasible. China and India, for example, didn’t provide enough clarity on which sectors of their economy are covered in their emissions targets, and India didn’t specify which greenhouse gases are included. As their targets are intensity targets and no official data sources were available for GDP projections, we had to make assumptions and used a range based on several sources. This process introduces further uncertainty due to the range used. In another instance, we were unable to quantify Iran's emissions target, since no official source is available for their BAU emissions projections.

We were unable to calculate targets for 35 NDCs that did not include a GHG target and did not provide estimates of future emissions based on the actions they plan to take. 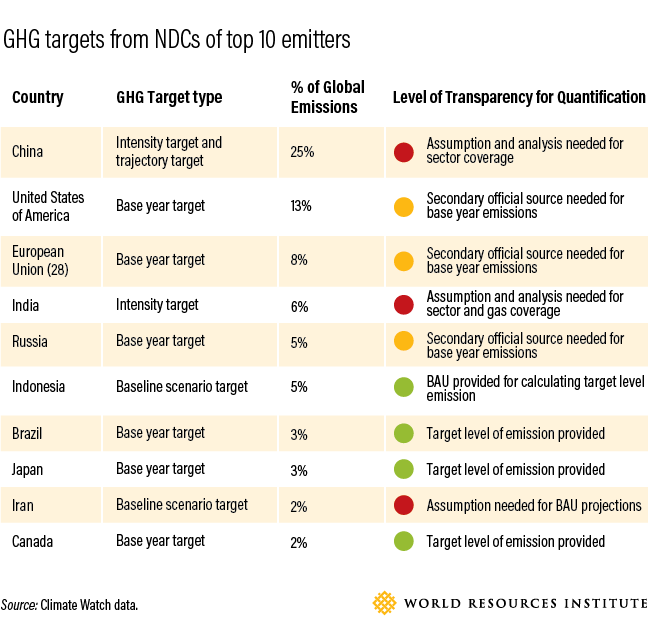 We took a simplistic approach with relatively straightforward calculations to quantify countries’ future level of emissions. Initiatives like Climate Action Tracker and PBL Climate Pledge NDC tool have published estimates of future emissions for a select number of countries through modeling exercises that factor in non-GHG targets and policies and actions, in addition to GHG targets.

Countries Need to Submit Transparent Climate Goals in their NDCs

The upcoming climate negotiations at COP24 in Katowice, Poland will be a crucial moment for promoting greater transparency. Negotiators are working to finalize a rulebook that will guide countries in meeting their commitments under the Paris Agreement. It should require transparent and robust information on NDCs, which countries should be encouraged to fill out when they revise and update their NDCs in 2020. Without greater transparency, the global community’s efforts to prevent catastrophic climate change will be on shaky ground.

Climate Watch provides quantified emissions reduction targets for over 150 countries, as well as detailed information about every individual NDC. The data will be updated annually to track countries’ progress towards their GHG reduction goals.