Urbanization is by and large a good thing, corresponding with steady declines in extreme poverty. More compact cities may also hold the key to a sustainable future.

But this trend has come with a side effect: more dangerous city streets.

With more vehicles and more people in cities, there are more opportunities for crashes—especially as cities race to keep up with infrastructure demands, sometimes leading to sloppy or ill-planned growth.

The World Health Organization estimates some 1.3 million people die in road-related crashes every year, a 4 percent increase from their last estimate in 2015. Ninety percent of fatalities occur in the developing world, where urbanization is fastest. The majority of these aren't people in cars — they are walking or riding motorcycles or bicycles.

To reverse this trend, it's not enough to ask drivers, pedestrians, and other people using the road to simply drive or walk differently; city planners should be intentionally designing roads and cities with safety in mind.

City blocks can vary in size considerably, from less than 300 feet (90 meters) wide to more than 600 feet in some places. Shorter blocks improve pedestrian safety by creating more intersections and therefore providing more opportunities to cross the street safety. More junctions also mean more places where cars must stop, reducing vehicle speeds. In cases where long blocks are already established, mid-block crossings and pedestrian refuge islands can increase the number of safe crossing options and reduce the need for pedestrians to cross at un-marked locations.

On a basic level, narrower lanes shorten the distance of pedestrian crossings, putting people in harm's way for less time. But they also provide more space for sidewalks, a critical need in dense urban environments. They also have a psychological effect on drivers: Reduced street widths tend to lower vehicle speeds as drivers become more aware of risk.

Depending on the scale and complexity of the intersection, installing roundabouts or traffic circles can significantly benefit safety. Circular junctions reduce the severity of crashes because all traffic is moving in the same direction, vehicles are forced to slow down and there is a lower chance of head-on collisions. Studies have shown an incredible 70-90 percent reduction in fatal and serious injuries in some places where roundabouts or traffic circles have been installed.

These artificial turns, created by adding alternating extensions of the sidewalk or barriers, force drivers to slow down and pay closer attention. They can also provide more space for pedestrian-friendly infrastructure, like wider sidewalks, small parks or urban furniture. 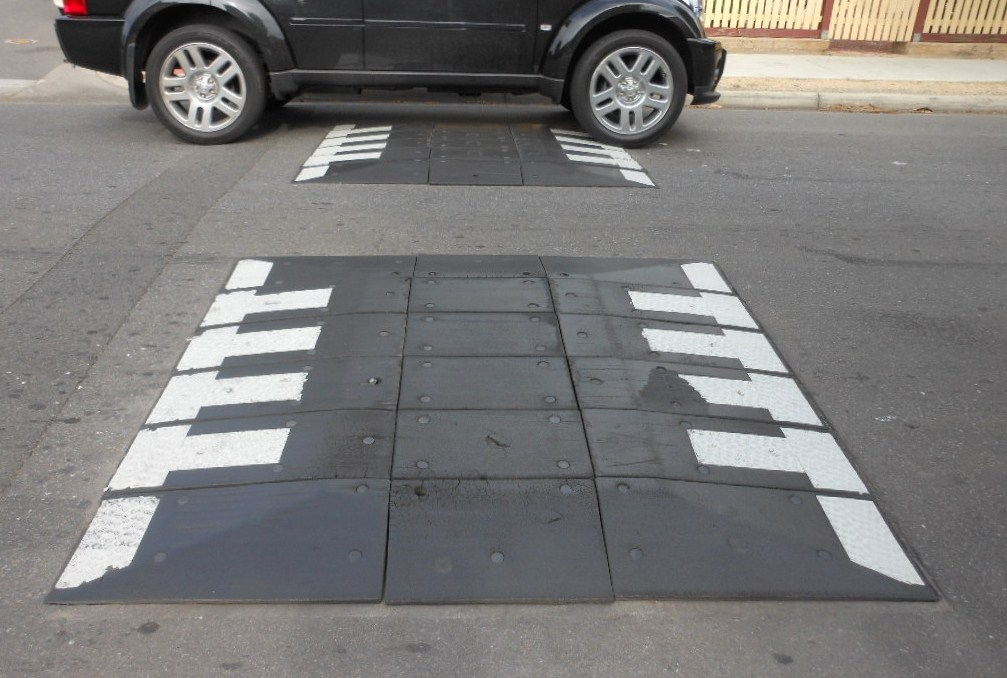 Speed humps are another easy way to slow traffic in specific areas. They are simple, but incredibly effective, according to the numbers. A well-designed speed hump can be smoothly traversed by cars traveling at the desired speed for safety, rather than causing rapid deceleration and acceleration. Some studies show that speed humps can reduce the number of crashes by around 50 percent. Speed humps actually have the greatest impact on speed-limit compliance of any intervention.

Raising the elevation of pedestrian crossings not only creates a speed hump but puts pedestrians higher in the eyeline of drivers, increasing their chances of being seen at night or in busy areas. It also sends a clear message that pedestrians have right of way. When they are raised to the level of the sidewalk, creating a smooth transition, they can also make it easier for those with different mobility needs such as people using wheelchairs, walkers or strollers to cross.

Finally, though less a specific road design change and more an approach to urban planning generally, compact, mixed-use neighborhoods can improve road safety by making it less necessary to drive. Planning new urban expansions around access to public transportation, parks, schools, shopping and other activities means people can find more of what they need closer to where they live and work. In studies of the United States, a direct link has been shown between less private motor vehicle travel and lower rates of traffic crashes.

Compact cities also reduce travel distances, encourage walking and cycling, and as a result are greener than more sprawling cities. A report from the New Climate Economy found a clear relationship between carbon emissions per capita and density, as well as savings in infrastructure capital investment from compact urban growth worth more than $3 trillion between 2015 and 2030. In many ways, a safer city is also a more sustainable city.

To find out more about these and many other best practices that put people at the center of road safety, download Cities Safer by Design from wri.org.

Special thanks to Daniel Hunter, Bruno Rizzon and Marta Obelheiro of WRI Brasil.