Land degradation adversely affects more than 1 billion people. Restoring land by increasing the number of trees, crops, and other plants can improve water availability, soil fertility, crop yields, resilience to climate change and more. The “Taking Root” series explores some of the many restoration successes happening in communities across the world.

Ali Malam remembers what his farm used to look like. Fifteen years ago, his land was dry and barren, and barely produced enough food to feed his family.

Now, his farm thrives. Healthy, mature trees dot the landscape, shading his land from the sun.

Sakina Mati, another local farmer, has a similar story. Together they have begun sharing their success on local radio. The result: unprecedented interest from dozens of local farmers and hope for their lives and livelihoods. This simple and efficient program has generated interest and capacity for restoration—providing a compelling case for the importance of publicizing successes in the struggle to bring degraded land back to life.

Malam's struggle is not uncommon in Niger, where the arid climate, intermittent droughts and agricultural intensification have degraded land. More than 80 percent of Nigeriens, or 16.5 million people, live in rural areas and depend on agriculture. The result is widespread food insecurity.

Many farmers in Niger clear the shoots re-growing from old tree stumps and roots in an attempt to add nutrients to the soil and plant as many crops as possible. But 15 years ago, Malam decided to try something different. Following advice he had received from a previous International Fund for Agricultural Development project in Aguie, Malam began to maintain the shoots instead. He identified the healthiest stems and trimmed off the rest. This selective pruning, known as pollarding, stimulates the growth of new leaves and shoots from old, hidden root systems. Now, because of the new growth, the tree roots pull water from deep underground, irrigating crops and stabilizing the nutrient-rich soil.

These improvements have increased Malam's harvest, providing his family with more than enough food. His trees are so healthy he sells their trimmings as firewood, adding to his income. Malam's ingenuity has helped him buy more land and expand his operations. 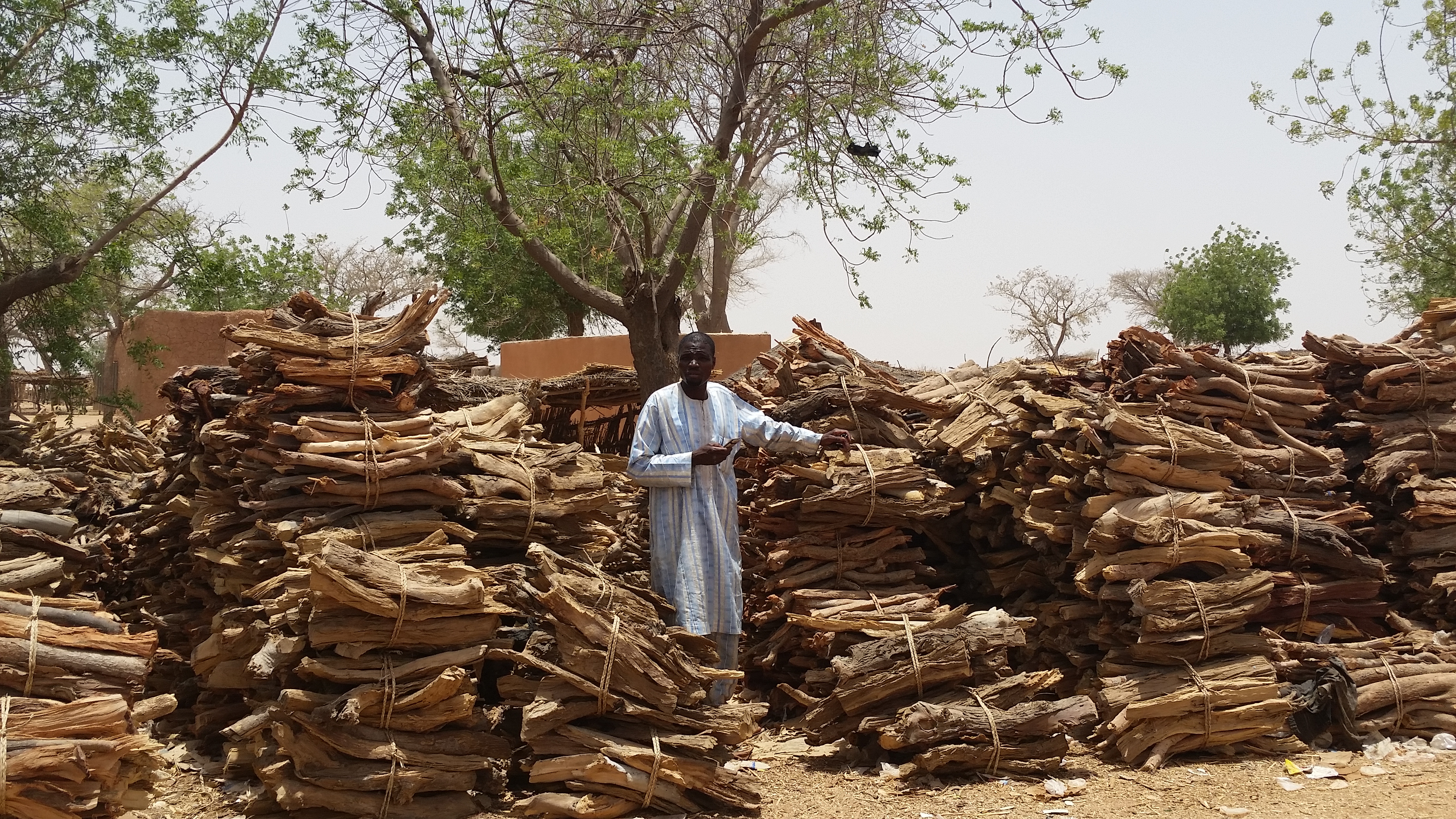 Malam’s tree management has been so successful that he now sells trimmings to other villagers. Photo: Salima Mahamoudou

The practice that Malam's used to re-green his land is called farmer-managed natural regeneration (FMNR). Through FMNR, farmers nurture old stumps and roots back into healthy trees that boost agricultural productivity and create sustainable sources of income. Using similar techniques, Sakina Mati has grown dozens of trees. Like Malam, she has benefited. The extra income from selling branches, pods, bark and fruit helps Mati survive droughts and bad harvests. Letting old tree stumps regenerate has also had unexpected benefits for local biodiversity. Some of the new trees are species Mati hadn't seen in 30 years.

Spreading the Word About Re-greening

Mati and Malam are now ambassadors for FMNR. Malam travels from farm to farm to teach others FMNR techniques. Mati created a women's group in her community that meets to discuss re-greening. They inspire other community members to manage trees so more people can benefit from land that is productive and resilient.

Not every community is fortunate enough to have champions like Mati and Malam. Recognizing this challenge, WRI partnered with the Forest Services of Niger's Ministry of the Environment to spread re-greening. The Ministry is committed through the African Forest Landscape Restoration Initiative (AFR100) to restoring 3.2 million hectares of degraded land across Niger.

The plan was simple: radio outreach. 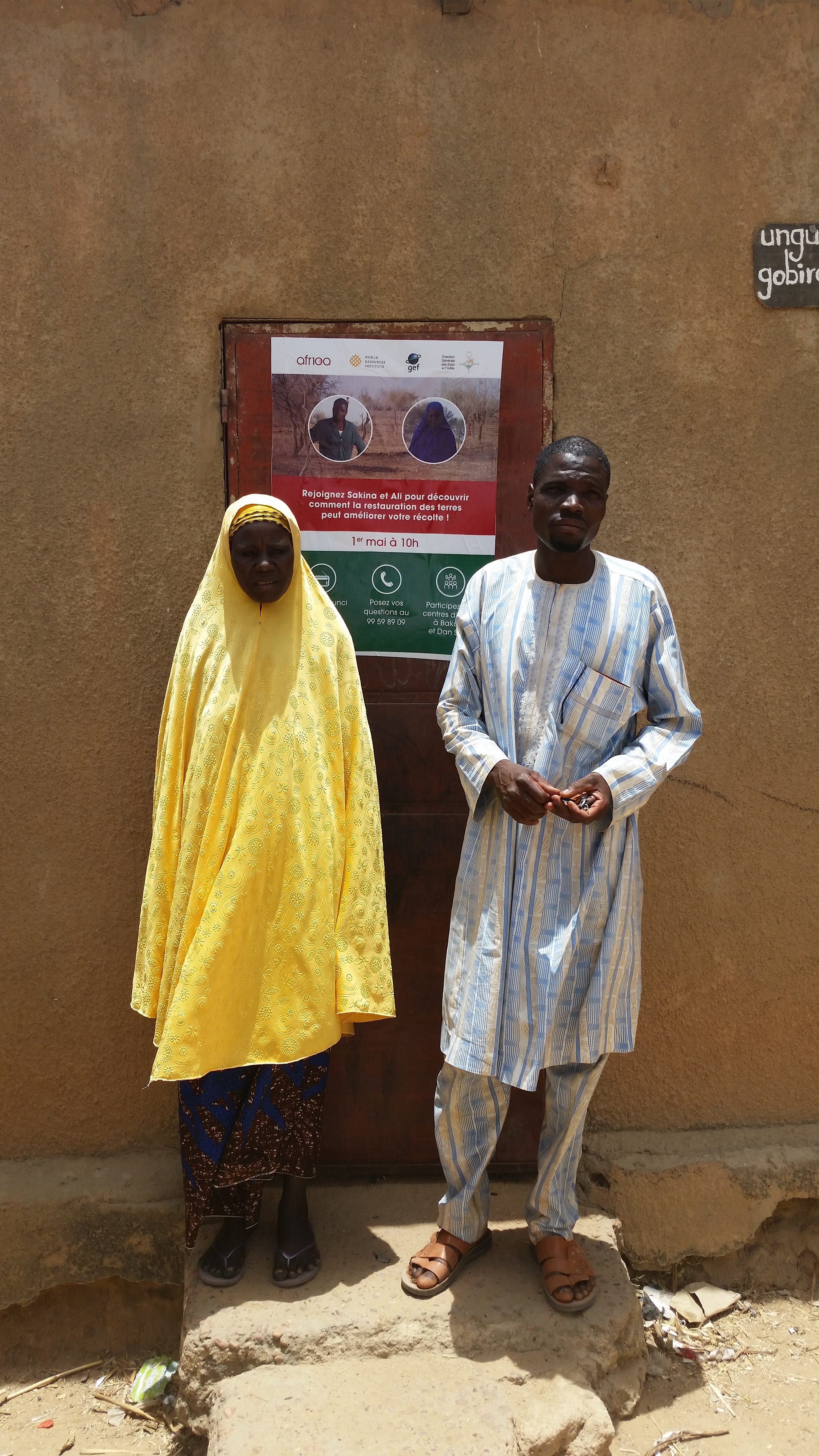 Mati and Malam with the poster advertising their radio show. Photo: Salima Mahamoudou

Radio is the main source of news in Niger, and there are more than a hundred rural community radio stations that broadcast local news. The Ministry and WRI partnered with Radio Zumunci in Maradi region to give Malam and Mati the opportunity to share their experience live on air. (Niger is divided into seven regions.) The show was promoted in all Maradi's communities, with temporary call stations, where locals could use phones to call into the radio show, set up by WRI in two villages: Bakabé, where regreening had yet to take off, and Dan Saga, a community with significant FMNR experience.

Calling to Learn About Restoration

In May, WRI research analyst Salima Mahamoudou waited in the local school of Bakabé, where she had set up a station for villagers to call in to the radio show. She was nervous, recalling "I wasn't sure if anyone would dare to ask questions. I was worried that once we reached the Q&A part, we wouldn't have anyone calling in."

Instead, she soon found herself too busy to be nervous – villagers were lining up outside the school to use the phone. "Everyone had so many questions. 'How do I start growing trees? Which tree species should I use? How long do the trees take to grow using FMNR practices?' There were so many callers that the radio show went half an hour over time!" she adds. 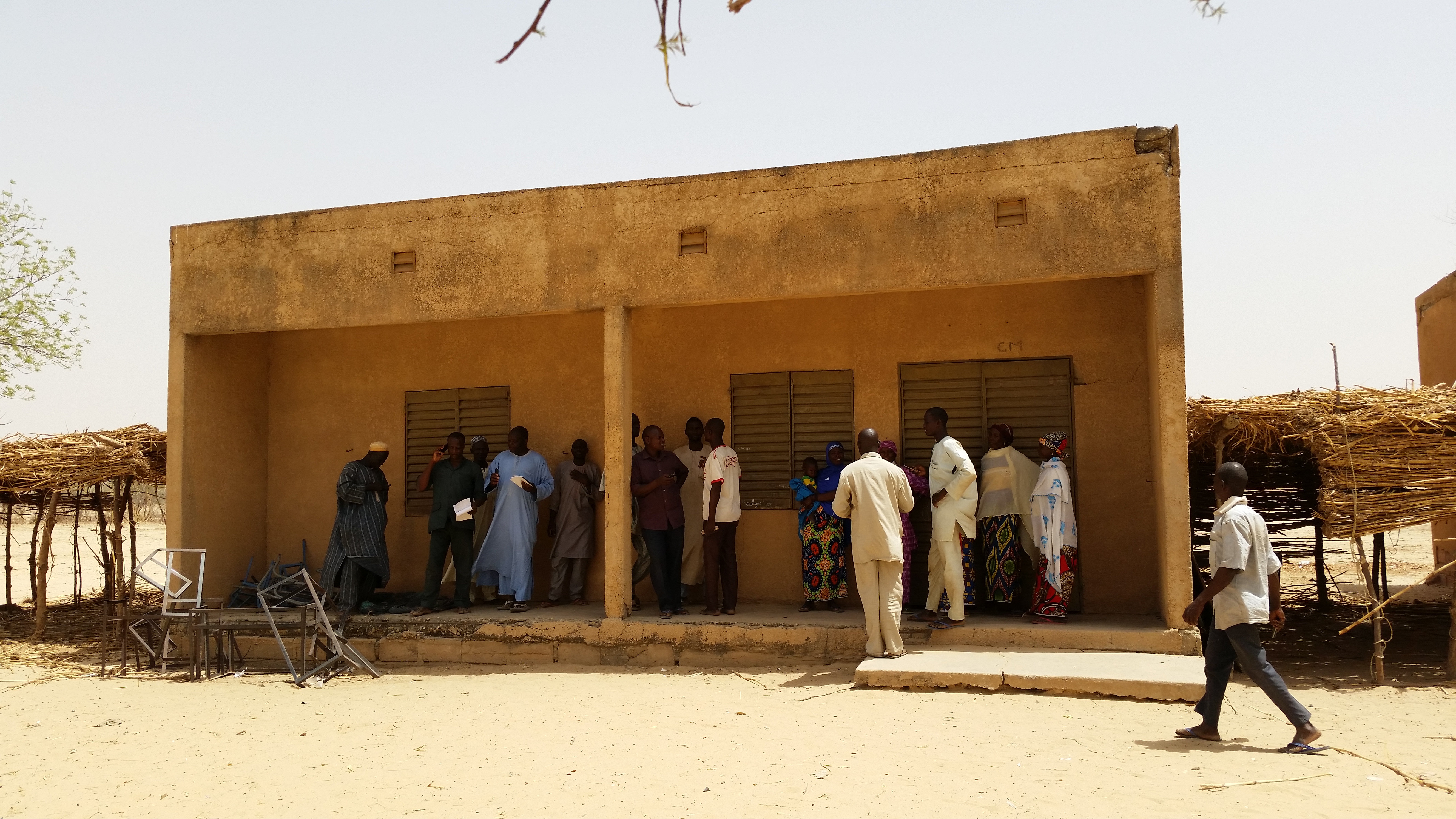 Villagers from Bakabé line up to speak with Mati and Malam about how to begin practicing farmer-managed natural regeneration on their farms. Photo: Salima Mahamoudou.

The program was a success for Radio Zumunci, which also received dozens of calls from other villages in the surroundings, where the show had not been promoted. It was clear that re-greening was a topic of great interest to residents of Maradi and elsewhere.

Broadcasting the Benefits of Re-greening

Niger has already had success with re-greening. Since the early 1990s, at least a million households have adopted FMNR, re-greening and managing trees on around 5 million hectares of cropland. But the country still faces land-related challenges. 5.5 million Nigeriens still live on severely degraded land. Niger's population is also projected to grow by more than 10 million to 35 million by 2030, straining crop and livestock production and water supplies. But empowering farmers to re-green their own land can secure a prosperous, food-secure future for Niger's next generation.

As the radio show demonstrates, platforms that support re-greening do not have to be complex or expensive to be effective. They just need to build on the experience that Nigeriens already have. Fortunately, the Ministry of Environment is interested in replicating the radio show approach across Niger and is already working with WRI on another radio broadcast in Tahoua region.

For Mahamoudou and her colleagues, it became clear that supporting FMNR champions like Mati and Malam can catalyze Niger's already strong landscape restoration movement for future success.