The GHG Platform India, a collective civil-society initiative, documents GHG emissions at a more granular level. The data is also more recent than other available offerings. The analysis is for the years 2005 to 2013. 2005 is the base year for India's Paris pledges; 2013 is the most recent year for which reliable data for key economic sectors exist. (The analysis will be updated as new data becomes available, which usually takes three to four years.)

The GHG Platform India analysis provides the latest picture of the trends in India's emissions—and, therefore, helps prioritize pathways to reduce pollution and meet climate goals. This blog summarizes what we can learn from the GHG Platform India's analysis of India's GHG emissions (PDF).

India’s Emissions Grew Faster Than Their Population—But Are Still Low per Capita Compared to Countries Like U.S. and China 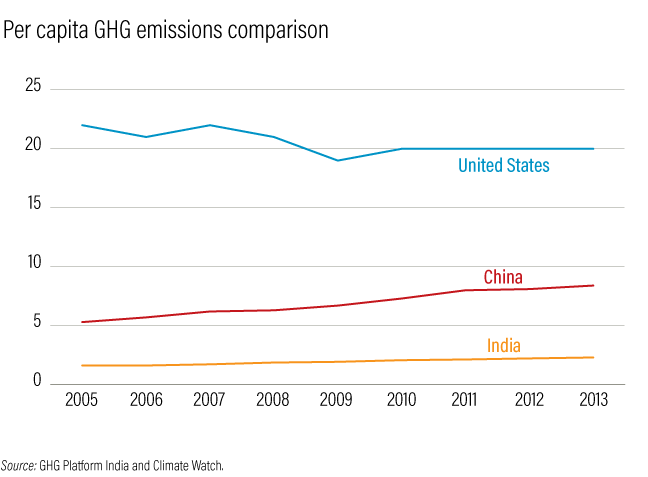 Two-thirds of Indian Emissions Came From the Energy Sector

CSTEP's analysis shows that 68 percent of India’s emissions between 2005-2013 came in from the energy sector, more than three times the second-largest (the industry sector). Energy-related emissions continue to dominate, with its percentage share within overall national emissions remaining more or less constant (62 percent in 2005 to 63 percent in 2013) over the years.

Within the energy-sector, about 77 percent comes from electricity generation, mainly due to the current fuel-mix within domestic installed capacities. Emissions are expected to decline due to various considerations outlined by the National Electricity Plan, including adoption of cleaner technologies, a moratorium on adding new coal-based capacity, the ambitious goal of updating the fuel-mix to 40 percent non-fossil modes by 2030 and overall packages on resource and energy efficiency. 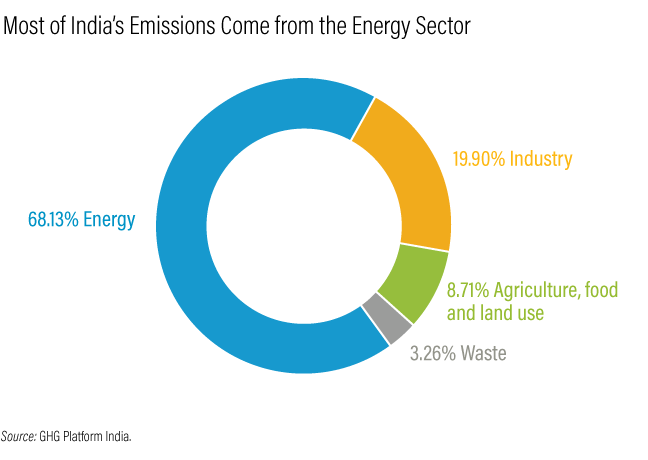 CEEW's analysis shows that four-fifths of industrial GHG emissions came from coal consumption. India has committed to reduce the emission intensity of its gross domestic product (GDP) by 33 to 35 percent by 2030 against 2005 levels. At the same time, through the Make in India Initiative, the Government of India aims to encourage domestic industrial production. Enhancing efficiency gains along with a shift towards cleaner fuel can help decouple emissions from industrial growth.

CEEW's analysis reveals that changes in fuel prices over time in some states accelerate shifts towards cleaner fuel. States like Gujarat, Uttar Pradesh and Maharashtra lead in the uptake of natural gas due to the availability of gas pipelines. Having said that, the Indian industrial sector uses gas as feedstock and heating fuel, traditionally due to limited domestic gas availability. Hence, transitions to cleaner fuel were not strong enough to make a significant cut in the share of coal use by industries.

India’s Land-use Emissions, Which Mostly Come From Agriculture, Are Declining

Vasudha Foundation's analysis shows that emissions from agriculture, forestry and other land-use (AFOLU) declined slightly, by 1.95 percent annually. This marginal decline can be attributed primarily to stagnation in the growth of population of cattle (livestock) and an increase in removals from the forestry sector. (Emissions from agriculture are dominated by two sources, livestock and rice cultivation, which together accounted for about 80 percent of the total AFOLU emissions for 2005 to 2013.)

Aggregated numbers show that India has maintained forest and tree cover, resulting in a growing land carbon sink. The nation aims to create a total carbon sink of 2.5 to 3 gigatons of CO2e through afforestation. (These numbers include plantations of coconut, rubber and other commodities against countervailing loss of natural forests.)

Additionally, revised Municipal Solid Waste (Management & Handling) Rules in 2016 and an increased focus on "waste to wealth" should result in reduction of GHG emissions in this sector.

Where We Are Shows Where We Can Go

Now that the first global stocktaking exercise of the Paris Agreement has officially begun with the 2018 Talanoa Dialogue, the role of non-state actors and civil societies is becoming more and more clear. This independent assessment by GHG Platform India provides the most recent information on GHG emissions for India and helps to answer one of the three key questions the dialogue intends to cover: “Where are we?”

Correction: This blog has been updated to reflect that India's goal is to update the fuel-mix to 40 percent non-fossil modes by 2030, not 2020, as was previously described.