One year ago, the Financial Stability Board’s Task Force on Climate-related Financial Disclosures (TCFD) released its recommendations to guide companies and financial organizations in the assessment and disclosure of climate-related risks and opportunities. Greeted with overwhelming support from the financial community, the TCFD included a recommendation to conduct and disclose climate-related scenario analyses to inform investors’ and companies’ decisions on climate issues. Investors are understandably eager for this information.

Which Businesses Are Disclosing? And How?

As momentum surrounding the TCFD builds, we expect to see climate-related scenario analysis disclosures continue to grow. Scenario analysis—long used in governmental, academic and business settings—analyzes different possible paths that could lead to different possible futures. Scenarios are not predictions of the future, but rather interpretations about how the state of the world could evolve. It has recently become a tool of choice for assessing the business implications of climate change, helping organizations and investors frame and assess potential climate-related risks and opportunities. Our initial review of the 22 analyses published in the TCFD’s first year showed four trends:

1. Most disclosed scenario analyses come from the oil and gas sector. 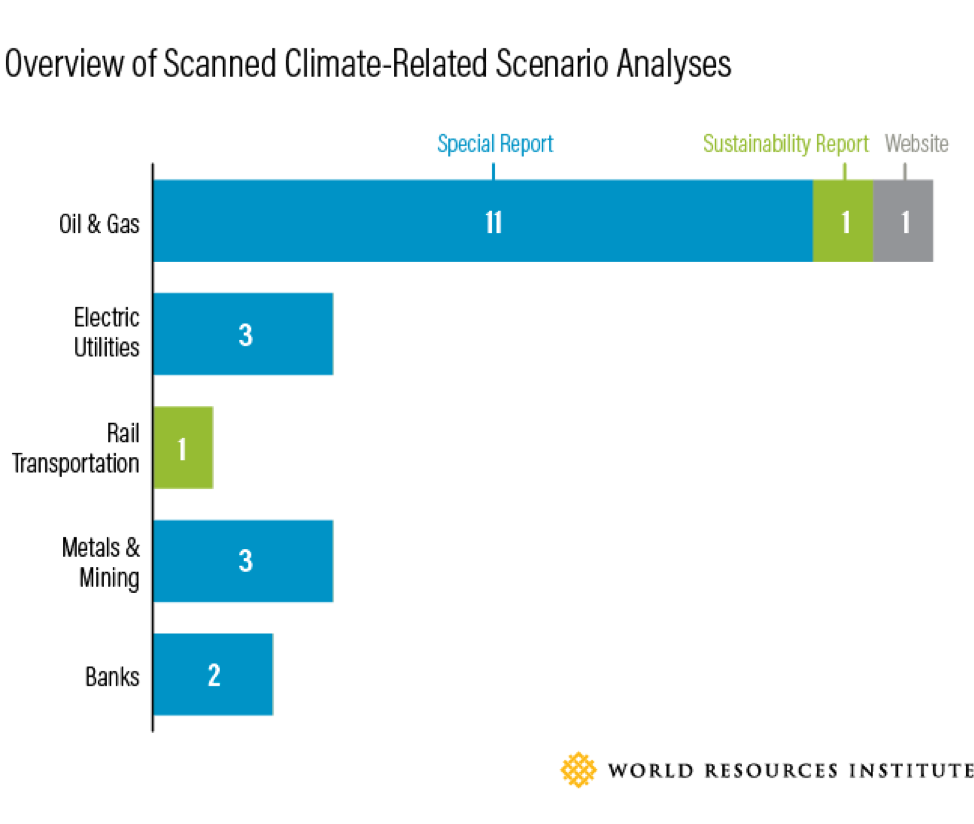 The TCFD recommends that climate-related disclosures, including scenario analyses, be published in annual financial filings—core disclosure publications that generally carry the most weight with investors and regulators. This approach, however, is not the norm. Though we did see climate-related scenario analyses mentioned in annual filings, the majority of companies published special reports to disclose their analyses (see above figure). These reports, such as BP’s annual Energy Outlook and Suncor’s Climate Report: Resilience Through Strategy, often contain elements above and beyond scenario analysis, and are published separately from annual financial filings. Some companies disclosed their analysis in sustainability reports, and some, like ConocoPhillips, did not disclose their analysis in reports at all, simply referring to it in other reports or on websites.

3. Companies use a wide range of reference scenarios, or none at all, which inhibits transparency and comparability.

The TCFD recommendations highlight how existing global climate-related scenarios—like those from the IPCC and IEA—are an important contextual and methodological starting point for conducting scenario analysis that can serve as a reference for companies when conducting their own scenario analysis. Some companies used only these third-party reference scenarios, some companies used only proprietary scenarios and some companies used a combination of both. Some companies, like Duke Energy, only used one scenario. The use of varying scenarios, all with different assumptions and reported metrics, which were often not unpacked, inhibits transparency within climate-related scenario analyses. This lack of transparency makes comparability, a focal point of the TCFD, extremely difficult.

4. All disclosures feature at least one 2-degree aligned scenario, but how companies treat those scenarios varies.

The TCFD recommends that organizations conduct scenario analyses using at least one 2 degree C (3.6 degree F) aligned scenario. All disclosures from the last year did so. However, while some companies like Total use a 2 degree scenario as their base case, others like BP give little color on their 2 degree scenario, providing more analysis on scenarios with increasing carbon emissions. Many companies also used scenarios aligned with temperature rises above 2 degrees, and some of these companies, like Oil Search, have begun to analyze the potential impacts from the increased physical risks associated with higher warming scenarios. However, some companies used proprietary methods that are difficult to compare across companies, and without the use of a common reference scenario, even companies’ 2 degree analyses are difficult to compare.

We are encouraged that companies are beginning to heed the TCFD’s recommendations, including those on scenario analysis. Our preliminary observations suggest, however, that most companies who are performing climate-related scenario analysis are still in the experimentation phase.

For climate-related scenario analysis to reach its full potential as a useful tool to help companies and investors with decision-making, more work is needed to improve transparency and comparability between companies’ efforts.

In this pilot stage, there may be value in experimenting with a range of potential reference scenarios. However, eventual convergence around a significantly smaller set of commonly accepted reference scenarios, or even just one, could help make the analyses more comparable and thus more useful. In the UNEP FI’s Pilot Project on Implementing the TCFD Recommendations for Banks, 16 global banks used three scenarios aligned with 1.5, 2, and 4 degree temperature rises, serving as an example of how this convergence could happen.

In the absence of comparable scenarios, transparency takes on even greater importance. If parameters, assumptions and analytical choices aren’t spelled out, it is harder for investors to assess the credibility of a scenario. Lack of transparency also makes it harder for companies to compare themselves to their peers.

Limitations around comparability and transparency inhibit capital flowing to the most responsible and strategic companies. They also keep investors from engaging with the most climate change-exposed companies to improve awareness and risk management. This in turn could slow down companies’ decisions to position themselves to thrive in the future.