By now, you’ve probably heard about the world’s problem with food loss and waste. An estimated 1.3 billion metric tons of food go to waste each year, affecting our economy, our well-being and our environment. What you’ve probably heard less about is the progress being made in reducing food loss and waste, and what needs to happen in the future to address this problem.

That’s where the new SDG Target 12.3 on Food Loss and Waste: 2017 Progress Report, released by the Champions 12.3 coalition, comes in. It tracks the movement toward meeting SDG Target 12.3 and lays out a roadmap for what both companies and governments need to do to achieve that goal. Developed by a team of experts from WRI and the Waste and Resources Action Programme (WRAP), it’s the first comprehensive, time-bound roadmap we’re aware of that specifically addresses one of the 169 SDG Targets.

Target 12.3 of the United Nations’ Sustainable Development Goals calls on the world to “halve per capita global food waste at the retail and consumer levels and reduce food losses along production and supply chains, including post-harvest losses” by 2030.

Our roadmap shows the timeline for cutting food loss and waste in stages, with the first milestone, for a 5 percent reduction, in 2018. So how are governments and companies doing in each of these areas? 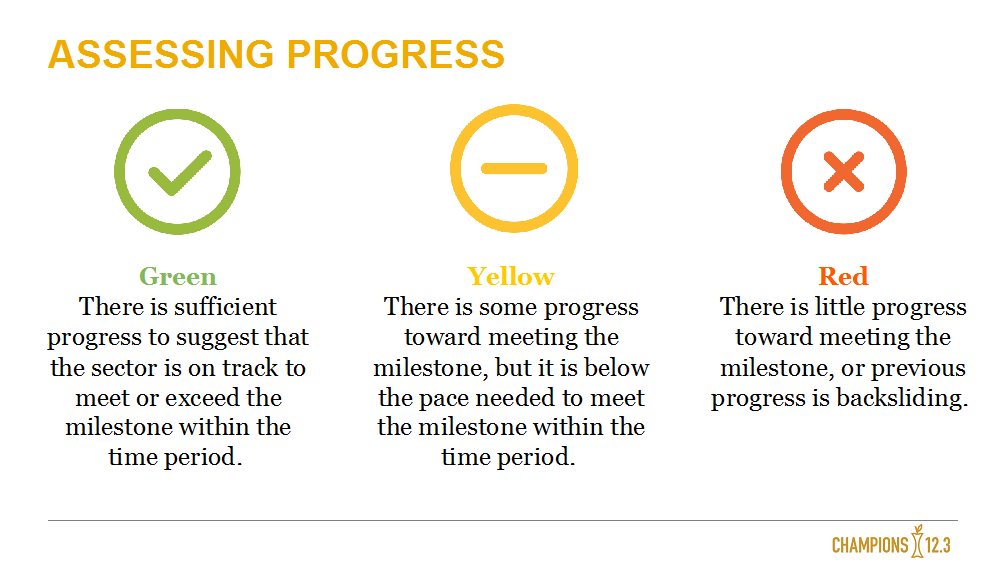 Companies are more advanced on target-setting than governments, earning them a “green” assessment for this category. The new major corporate target set this year came from the Global Agri-business Alliance, which announced a Food and Agricultural Product Loss Resolution this week. With the adoption of this resolution, 60 percent of the world’s largest food companies now have a food loss and waste reduction target, meeting the 2018 milestone a year early.

When it comes to measurement, governments aren’t measuring up. The countries that measure and report on food loss and waste within their borders only represent about 7 percent of the world’s population. Regional blocs such as the EU, African Union and APEC have large roles to play in motivating their members to measure. Measurements should be conducted in conformance with the Food Loss and Waste Accounting and Reporting Standard (FLW Standard).

Companies are doing better than governments on measurement, but not by much. Only a handful of the world’s largest food companies are currently measuring and publicly reporting on their food loss and waste. And as with governments, they should use the FLW Standard as they conduct those measurements and report their results.

When it comes to action, there’s plenty by governments, especially in the EU, the U.S. and Japan. Globally, a number of public-private partnerships and consumer campaigns also address food loss and waste. But these efforts are far from comprehensive, and fall short of the 2018 milestone of 5 percent loss reduction. In the coming year, scaling up the financing of food loss and waste reduction efforts will be especially important.

Companies are again somewhat ahead of the curve when it comes to action: Campbell Soup Company, Kellogg Company, Nestlé, Sodexo, Tesco, Unilever and Walmart all have active food loss and waste reduction programs. On top of that, many are working with their upstream suppliers on food loss and waste reduction efforts. Many more companies will need to follow their lead to stay on track for 2030.

Overall, the 2018 milestone is a 5 percent reduction in global food loss and waste. Although lots of great work is happening in the Target and Act categories, without good measurement we can’t know how much of that reduction (if any) is being achieved. As more countries start to conduct national food loss and waste inventories, a global picture should begin to emerge.

2030 feels like a long time from now. But if we really want to cut food loss and waste in half in just 13 years, all governments, companies, farmers and individuals must begin to address the issue head on.

This roadmap should help us all do just that―and will keep us honest about our progress along the way.