Does the future of city transport roll on two wheels?

Let city leaders know that bike riders can mobilize as a political force. Sam Adams, WRI’s U.S. director and former major of Portland, Oregon, noted that cyclists were consistently ignored until they formed a Bike PAC which endorsed candidates and made donations. Even though the sums involved were small, politicians began to pay attention to the cyclists’ concerns about safety and the need for better infrastructure.

Finding common concerns among all stakeholders is key, and a good place to start is the urban economy. Traffic can drag down economic growth, at a rate ranging from 1.1% in New York City to 15% in Beijing.

“One of the key strategies in Denmark has been the National Bicycle Strategy, which brought together all different stakeholders and created a common language in the field,” Bondam said. Building public support for urban biking requires the same tools used to raise the public health hazards of smoking. 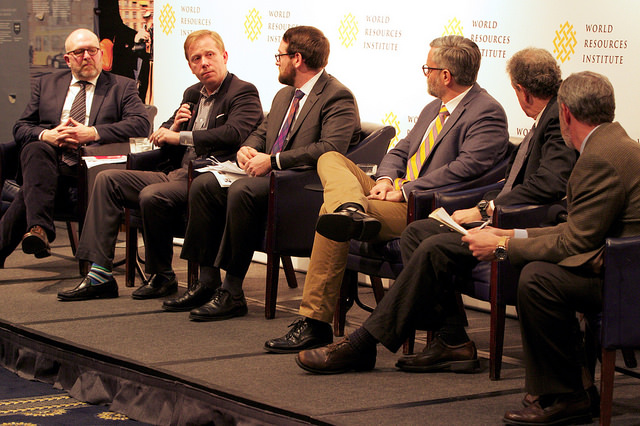 Encourage cycling by making room for cyclists. New bike-friendly infrastructure brought a 24 percent rise in Copenhagen ridership, with a 63 percent increase in a feeling of safety, Bondam said. When choosing where to build, prioritize use and accident reduction, as well as linkage of cycletracks to create full networks.  Building “cycle superhighways” that link suburbs with inner cities can be particularly effective. Shared bike platforms, like the Bikeshare system in DC, also play an important part in increasing ridership.

Biking needs to be integrated with other modes of transport. That means ensuring that buses have bike racks, and making it easier for riders to bring their bikes on trains – a measure that helped expand the commuting range for cyclists in Copenhagen.

More than a quarter of respondents said they bike because it’s healthier. Bondam jokingly said that Danes like biking because it flatters their Viking roots—“there’s a sense of conquest when you get to the office”—but there’s plenty of research that suggests employees are happier, healthier and more productive when they get in a bit of exercise on their morning commute.

And it’s not just healthier for the cyclists. More bikes on the road means fewer cars, which decreases pollution. Lars Loese, the Danish ambassador to Washington who also attended the event, said 50,000 Americans die every year from pollution, a problem biking can help alleviate.

Bondam also emphasized the degree to which biking is an activity through which families bond in Denmark; more than a third of Danish families bike with their children. Danish kids start learning cycle games in kindergarten.

Nothing happens overnight. When asked how long it might take for residents of a U.S. city to embrace biking as Copenhagen has, Bondam responded cautiously: “A long time. Fifty years, maybe.” Not only do investments in infrastructure need to be made, but it takes a long time to internalize the culture of biking into a city’s DNA. 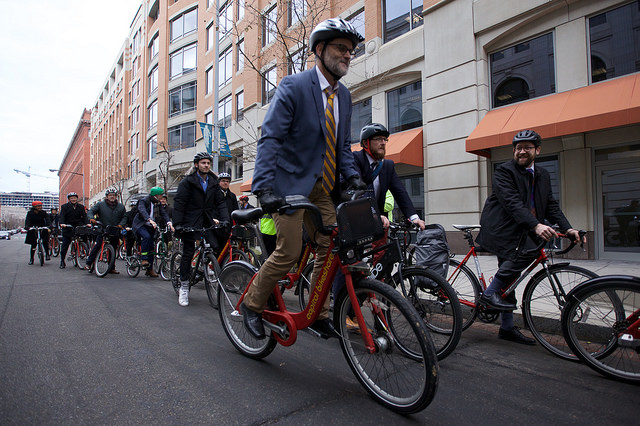 Sam Adams takes off from the WRI headquarters, leading our bike convoy. Photo by WRI/Flickr

The ride to the National Press Club showed that progress has already been made in the U.S. capital: the route followed bike-specific infrastructure most of the way, including a specific bike track and bike lanes down the middle of Pennsylvania Avenue between the Capitol and the White House. It was a glorious ride, in unseasonably pleasant January weather, and recalled perhaps the best argument of all for biking, which Bondam quoted from President John F. Kennedy: “Nothing compares to the simple pleasure of riding a bicycle.”