Finance is always a hot topic at the climate negotiations, and this year is no exception. The Paris Agreement is clear that all finance flows - both public and private - must become consistent with a low-emission and climate-resilient development pathway. Several new studies make clear that meeting the Agreement’s central goal of holding temperature rise to well below 2 degrees C (3.6 degrees F), aiming for 1.5 degrees C (2.7 degrees F), requires quickly shifting investments from fossil fuels and other high-emissions activities towards clean energy, green infrastructure and climate resilience. At COP 22 in Marrakech, work to develop the rules that deliver on this goal continues. Here are five key climate finance issues to watch:

In Paris last December, developed countries were asked for a concrete roadmap for mobilizing $100 billion in climate finance for developing countries by 2020. This roadmap - which can help build trust that developing countries will be supported in taking urgent climate action - is currently being finalized, with the aim of presenting it at a “pre-COP” gathering of ministers next week. It’s not clear whether current pledges will be enough to hit the $100 billion target. Developed countries should tally up and project their commitments in a clear and robust way. Several developed countries have still not announced commitments for the year 2020, and others have only made announcements relating to funding in certain areas, such as forestry or adaptation. If these countries come forward with greater clarity on what they are able to provide by 2020, it should be possible to close the gap and reach the goal on time. In addition, the latest reporting from multilateral development banks shows a drop in climate finance from 2014 to 2015. They play an important role in reaching the $100 billion goal, and must do more to shift their portfolios to meet the climate finance targets they set last year.

Determining progress towards the $100 billion goal is tricky, since countries have never agreed on what counts as climate finance. After considering this issue at negotiations earlier this year, countries agreed to hold a workshop in Marrakech to advance progress on the Paris commitment to develop modalities for accounting of finance. WRI made a formal submission setting out some key issues countries will need to consider. If approached constructively, this process has the potential to enhance consistency in finance reporting, benefiting all countries in their efforts to accurately track progress on commitments and ensure that the quantity and quality of climate finance flows improve over time.

Countries will also be developing formats for how finance will be reported, based on the following reporting mandates:

These requirements build on earlier rules, but have the potential to be more comprehensive and systematic. Countries need to ensure the reports provide useful information for the global stocktake that will assess progress every five years.

The Paris Agreement called for a balance between support for adaptation and mitigation, but there remains some way to go. Developed countries’ most recent reporting to the UN shows that 14 percent of bilateral funding went to adaptation in 2014 (an additional 17 percent went to both adaptation and mitigation). In Paris, countries called for significantly increasing adaptation finance. A clear commitment for how adaptation funding will be increased up to 2020 would bolster confidence that the most vulnerable countries’ most urgent needs will be supported. Proposed options include a 50:50 allocation between mitigation and adaptation, a doubling of the current share of adaptation finance and a doubling of the amount of adaptation finance from current levels. Some of these options could work together to help ensure funding is both balanced and increased at the same time. 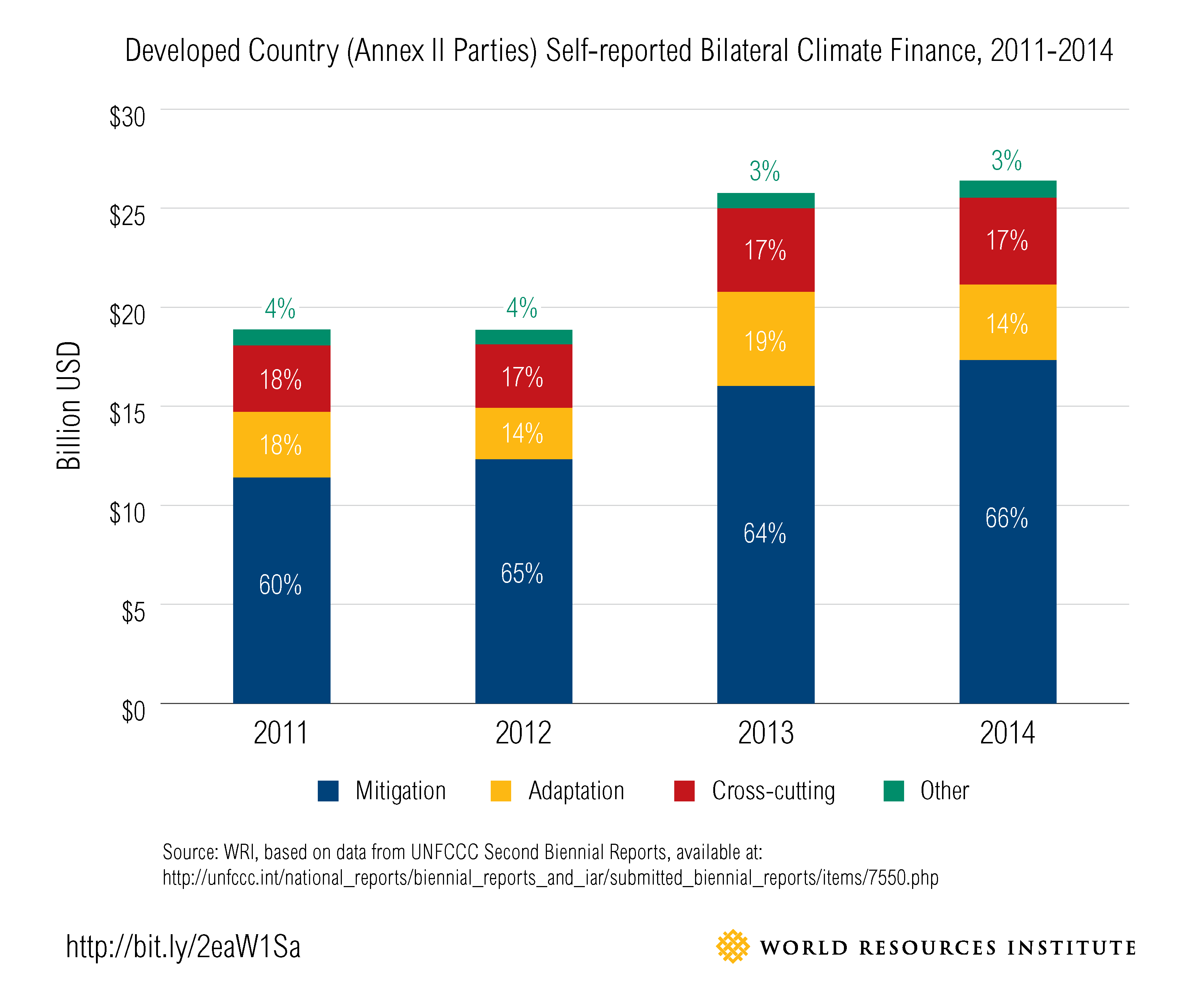 One mechanism for channeling adaptation finance to developing countries is the Adaptation Fund, which was created at the 2001 COP in Marrakech, to serve the Kyoto Protocol. With the Protocol’s commitment period ending in 2020, the Fund’s future is uncertain. Countries are considering whether and how the Adaptation Fund can support the Paris Agreement. The Adaptation Fund has a good niche in supporting relatively small-scale adaptation projects and prioritizing direct access to funding: providing money directly to national institutions in developing countries, without going through international intermediaries. Creating a mandate for the Adaptation Fund to serve the Paris Agreement in Marrakech would give it a new lease on life to continue supporting vital adaptation efforts around the world.