A full one-third of the food the world produces ultimately goes uneaten. That’s a billion tons of food loss and waste (FLW) every single year.

There are many good reasons to reduce this loss and waste—food security, economic gains and environmental sustainability, just to cite a few. But many of those most capable of fixing the problem, like governments and businesses, don’t know where to begin.

That’s why the Consumer Goods Forum, EU FUSIONS, FAO, UNEP, WBCSD, WRAP and WRI are launching the Food Loss and Waste Accounting and Reporting Standard (FLW Standard), the first-ever global standard to consistently measure FLW. For the first time, countries, cities, companies and others will have a practical method for quantifying how much FLW they’re producing, identifying where it’s coming from and setting measures to reduce it.

Doing so can yield a suite of benefits:

FLW costs the world up to $940 billion a year, so reducing it just makes financial sense. For example, the grocery retailer Stop and Shop/Giant Landover conducted an analysis of which products were spoiling on shelves, and saved an estimated $100 million after changing its purchasing decisions to eliminate products that were not selling. Other retailers like Tesco have generated additional sales and reduced their FLW by selling “imperfect produce.” The grocer sells bumpy or misshapen fruits or vegetables that are perfectly good to eat, but that other supermarkets typically throw away.

Governments can also help their citizens save money through FLW reduction. After measuring the amount of FLW occurring at the household level in the UK, the charity WRAP, with financial support from the UK government, launched a consumer education program called Love Food Hate Waste. This campaign provides consumers with tips and resources on how to reduce FLW within their homes. Since its launch, consumers have saved 13 billion GBP (almost $19 billion).

About 1 out of every 9 people globally is undernourished, meaning they don’t get enough to eat on a daily basis. Reducing FLW could be an important strategy in making more food available without needing to increase production. According to WRI analysis, cutting the rate of food loss and waste in half could close 20 percent of the nearly 70 percent “food gap” between food available today and what will be needed in the year 2050 to accommodate a larger population.

Strategies for accomplishing this look different depending on geography. In developing countries, where FLW tends to occur closer to the farm, increased food security can be achieved through infrastructure improvements like better crop storage and appropriate packaging after production to prevent spoilage. This provides smallholder farmers with a stable food source for themselves, their families and to sell for profit.

And in developed countries, where FLW tends to occur closer to the consumer, increased donation efforts by companies can help food banks and similar charities in their efforts to feed the hungry. Governments can encourage these donations. In France, the Senate passed a law requiring supermarkets of a certain size to donate their excess food, while in the United States, the “Good Samaritan Law” legally protects food donors from legal liability relating to any potential harm from donated food.

FLW uses a quarter of all water used for agriculture, requires land area the size of China to grow, and contributes 8 percent of all greenhouse gas emissions. If FLW were its own country, it would be the world’s third-largest emitter! 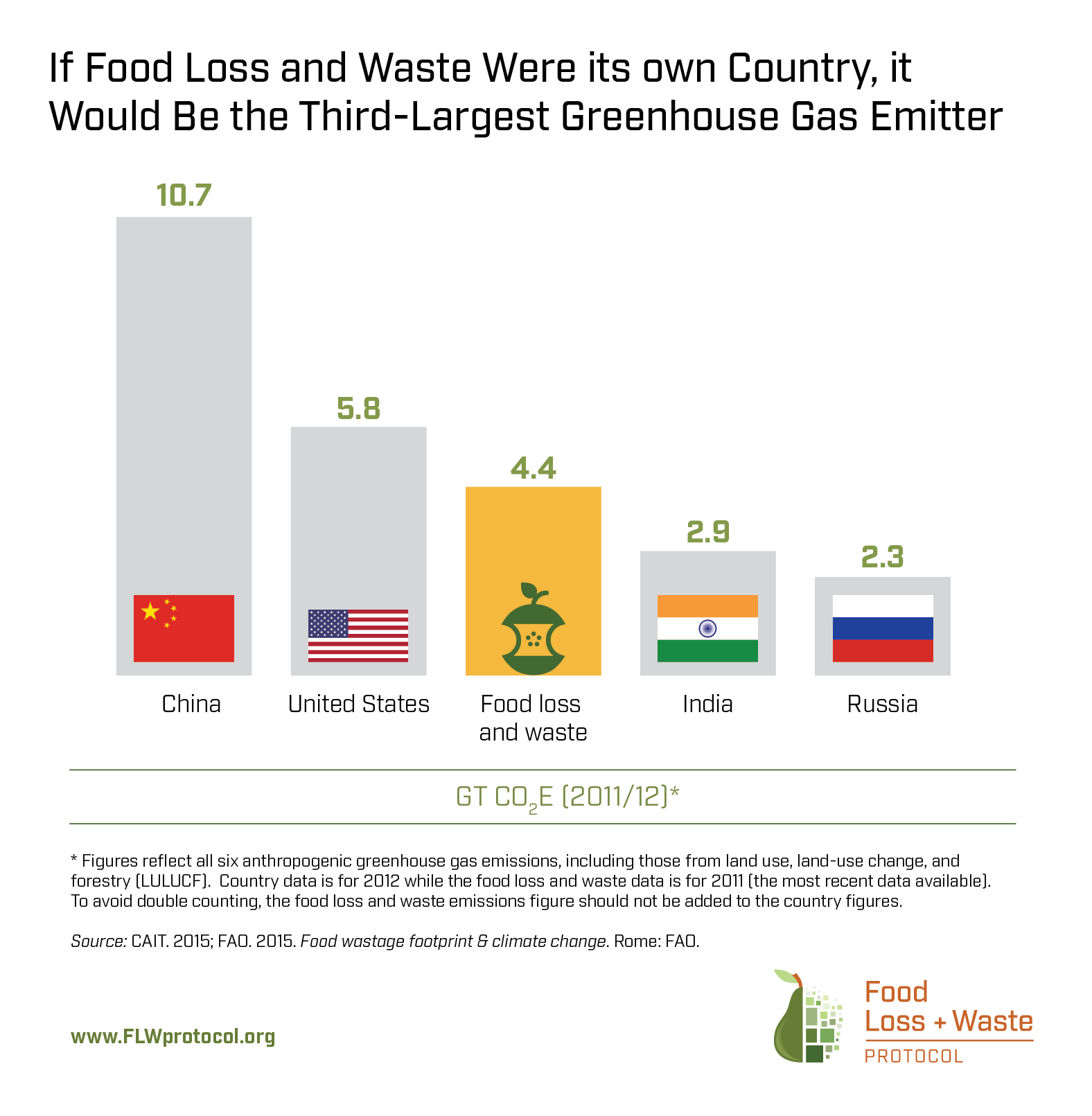 These global implications may seem abstract, but the environmental benefits of reducing can be felt at the local level. For example, due to the methane generated by FLW and the amount of land needed for landfill facilities, multiple states in New England have instituted bans on sending food waste to landfills. This presents an opportunity to use FLW in other ways. For example, composting facilities turn FLW into a nutrient-rich soil supplement that creates better crop yields, and anaerobic digesters create biogas from FLW to use as a more environmentally friendly alternative to fossil fuels.

Voluntary standards to reduce FLW are already emerging. The Consumer Goods Forum, which represents 400 companies across 70 countries, adopted a resolution to reduce FLW among its members by 50 percent by 2025, using the FLW Standard to track progress. Target 12.3 of the Sustainable Development Goals aims to halve food waste at the retail and consumer levels by 2030, while also reducing food loss along production and supply chains. Champions 12.3, a coalition of executives from government, business and international organizations, has formed to help achieve that target. And the U.S. Department of Agriculture and Environmental Protection Agency enacted the country’s first national food waste reduction goal last year, calling for a 50 percent reduction by 2030.

Governments, businesses and other groups that take action to reduce their FLW will emerge as leaders and demonstrate their support for these emerging national and international standards. They will reap the economic, food security, and environmental benefits of food loss and waste reduction. And they will be ahead of the curve in complying with potential future regulations.

With global awareness of FLW at an all-time high, it’s time to start making changes in countries, businesses, cities and households. With the FLW Standard, meaningful change is more attainable than ever.