A whopping one-third of all food intended for human consumption is lost or wasted from farm to fork. Let’s take a moment to think about the implications of such inefficiency in the world’s food system.

Consider food security. In some places, food losses near the farm are predominant (Figure 1) and affect the ability of farmers to make a good living and even at times feed their families. In other places like Europe and North America, food waste near the fork affects the less fortunate. In a world where one in nine people are undernourished, that fact that more than a billion tons of food never gets consumed is a travesty. 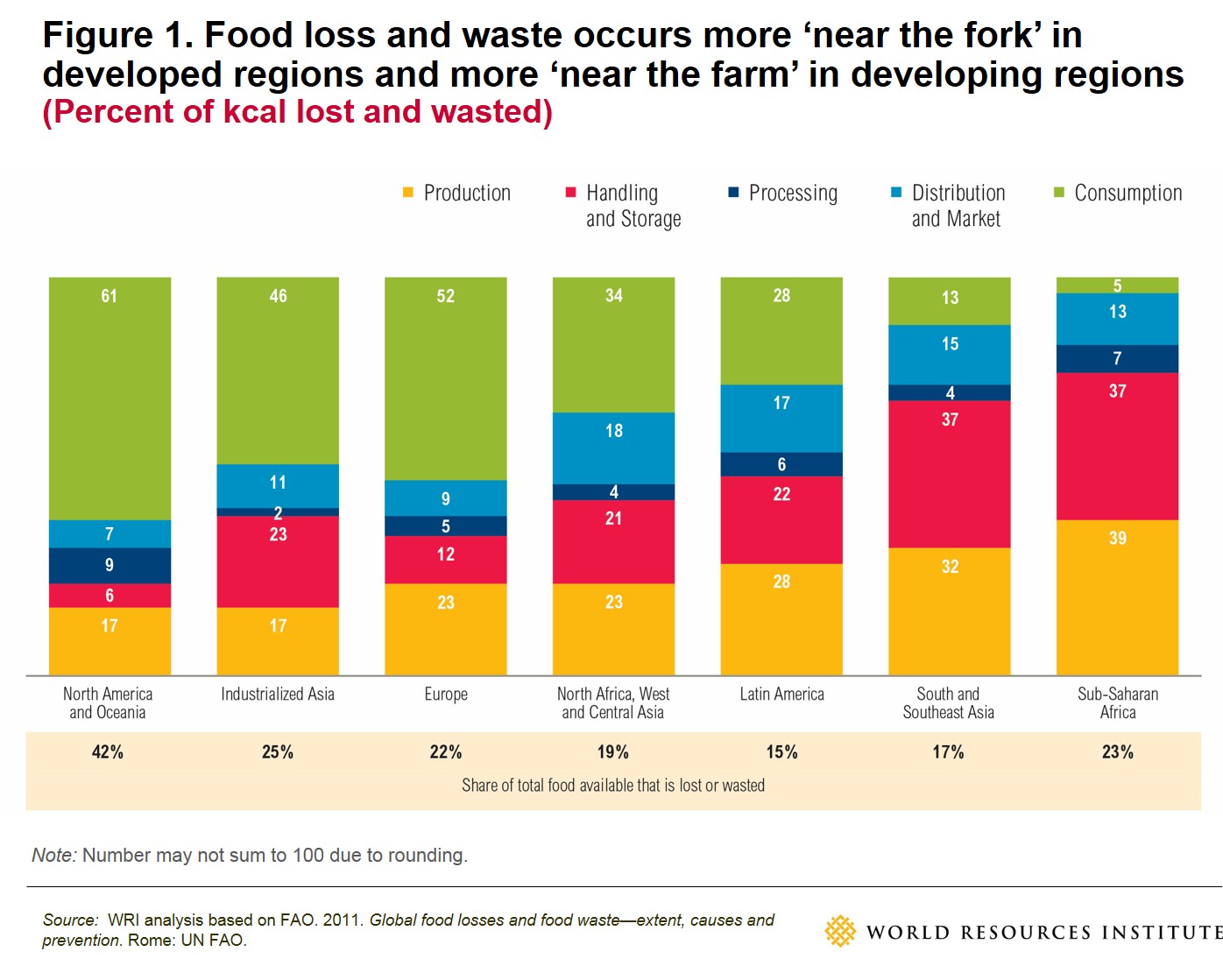 Or consider the economy. Globally, food loss and waste causes about $940 billion each year in economic losses. In sub-Saharan Africa, post-harvest losses amount to up to $4 billion per year. In the United States, food waste in households and restaurants costs an average of $1,500 per year for a family of four and about $1,060 per year for the average household with children in the United Kingdom.

And then there’s the environment. Food that is harvested but ultimately lost or wasted consumes about one-quarter of all water used by agriculture each year. It requires cropland area the size of China to be grown. And it generates about 8 percent of global greenhouse gas emissions annually. In fact, if food loss and waste were a country, it would be the third-largest greenhouse gas emitter on the planet behind China and the United States.

So what can be done?  Fortunately, there are some pioneers in efforts to curtail food waste. Many of them are involved in Champions 12.3, a unique coalition of leaders dedicated to inspiring ambition, mobilizing action and accelerating progress toward achieving Target 12.3 of the Sustainable Development Goals. This target calls for cutting in half food waste at retail and consumer levels and for reducing food losses along production and supply chains by 2030.

Champions 12.3 is chaired by Dave Lewis, CEO of Tesco, one of the world’s largest food retailers. Tesco is committed to reducing food waste across its operations and has introduced a number of innovations to combat waste.

The company’s “Community Food Connection” program links its stores with local charities to redistribute the food that is leftover at the end of the shopping day, helping those in need get a meal and reducing food waste from the store. A technology built into the Tesco inventory system sends a text to local charities and community groups about how much surplus food is expected to be available for donation at day’s end. Charities then confirm whether they will collect the food. Working with the NGO FareShare and social entrepreneurs FoodCloud, Tesco piloted the system in 14 stores in 2015, generating 50,000 meals. Currently in the UK, the program is in 150 stores providing the food equivalent of more than 300,000 meals to more than 700 individual charities and community organisations.

“We know it’s an issue our customers really care about, and wherever there’s surplus food at Tesco stores, we’re committed to donating it to local charities so we can help feed people in need,” said Lewis.

In addition, Tesco recently started offering “Perfectly Imperfect,” a brand new range of wonky-looking fruits and vegetables. Many grocery stores throw out produce that looks odd or “ugly” due to size, shape, color or texture. But often there’s nothing otherwise wrong with this food—the oblong, bumpy strawberry is just as nutritious as the perfectly shaped one. Recognizing this, Tesco is now making this produce available for purchase at around 200 UK Tesco stores, fresh from a British farm and at prices lower than standard-looking produce.

“Our customers are telling us that demand for these products is there,” added Lewis. “This is great news in the fight against food waste.”

On this side of the Atlantic, another Champion recently highlighted innovations in reducing food waste. During the third annual Food Waste & Hunger Summit, U.S. Secretary of Agriculture Tom Vilsack drew attention to efforts like The Campus Kitchens Project, which engages college and high school students to gather unused food from dining halls, grocery stores, restaurants and farmers’ markets and deliver it to the less fortunate. In just one year, students across 45 U.S. campuses diverted nearly 1 million pounds of food to the needy, providing more than 300,000 nutritious meals.

“There’s a unique opportunity for young people to say ‘we’re serious about food waste and its consequences’,” said Secretary Vilsack. “We understand that it costs families money, it’s bad for the environment, and we’d prefer to have an ethic that rewards savings and uses food in a way that provides opportunities to take care of food-insecure families.”

Other Champions of Target 12.3 such as Judith Rodin and Sam Kass, and Shenggen Fan and Andrew Steer, have recently shared additional ideas on how to reduce food loss and waste. Solutions are not in short supply.

Just think, if the approaches being highlighted by these Champions gain traction, perhaps we can achieve a world where no more food goes to waste.