Energy ministers and high-level delegates will gather in San Francisco next week for the Seventh Annual Clean Energy Ministerial Summit (CEM7). Chaired by U.S. Energy Secretary Ernest Moniz, the summit is the first meeting of national energy leaders since the Paris Agreement was adopted last year, with attendees including Wan Gang (China’s Minister of Science and Technology), Maroš Šefčovič (Vice President for the EU’s Energy Union), Piyush Goyal (India’s Minister of Power, Coal & New & Renewable Energy) and many more. It’s a key forum for countries to discuss how they’ll implement the clean energy goals they announced ahead of the Paris talks, and how they’ll collaborate on solutions to advance the uptake of wind, solar and other renewable power sources.

New analysis based on WRI research evaluates what countries have committed to so far on clean energy, and its potential impact.

In the last two years, 160 countries publicly announced clean energy plans to be achieved between 2020 and 2030. These commitments represent the largest move to clean energy to date, with both major developed nations and emerging economies making pledges, including Small Island States and Least Developed Countries.

If some of the biggest greenhouse gas (GHG) emitters—China, the United States, the European Union, India, Indonesia, Brazil, Japan and Mexico—achieve their post-2020 plans, total clean energy supply may increase by nearly 10,000 terawatt hours (TWh) by 2030i, enough to meet all of India’s current energy demand. This means that the big emitters would double their clean energy by 2030, relative to 2013 levels, and increase the world’s clean energy by as much as 25 percent. 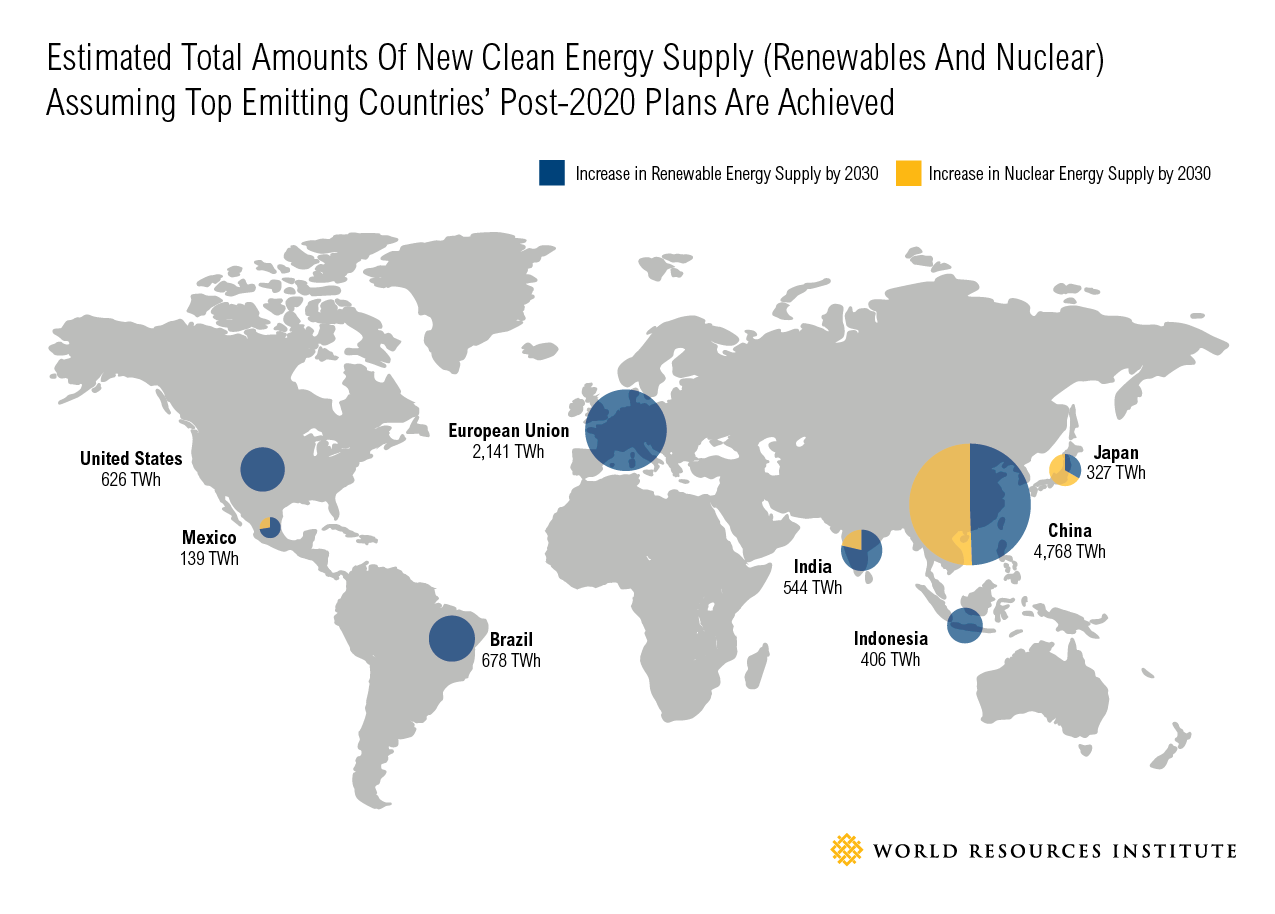 Countries’ clean energy plans are generally framed in the context of desired outcomes (such as increasing the share of clean energy to a certain level or percentage) or planned actions (for instance, renewable energy policies and feed-in tariffs)ii: 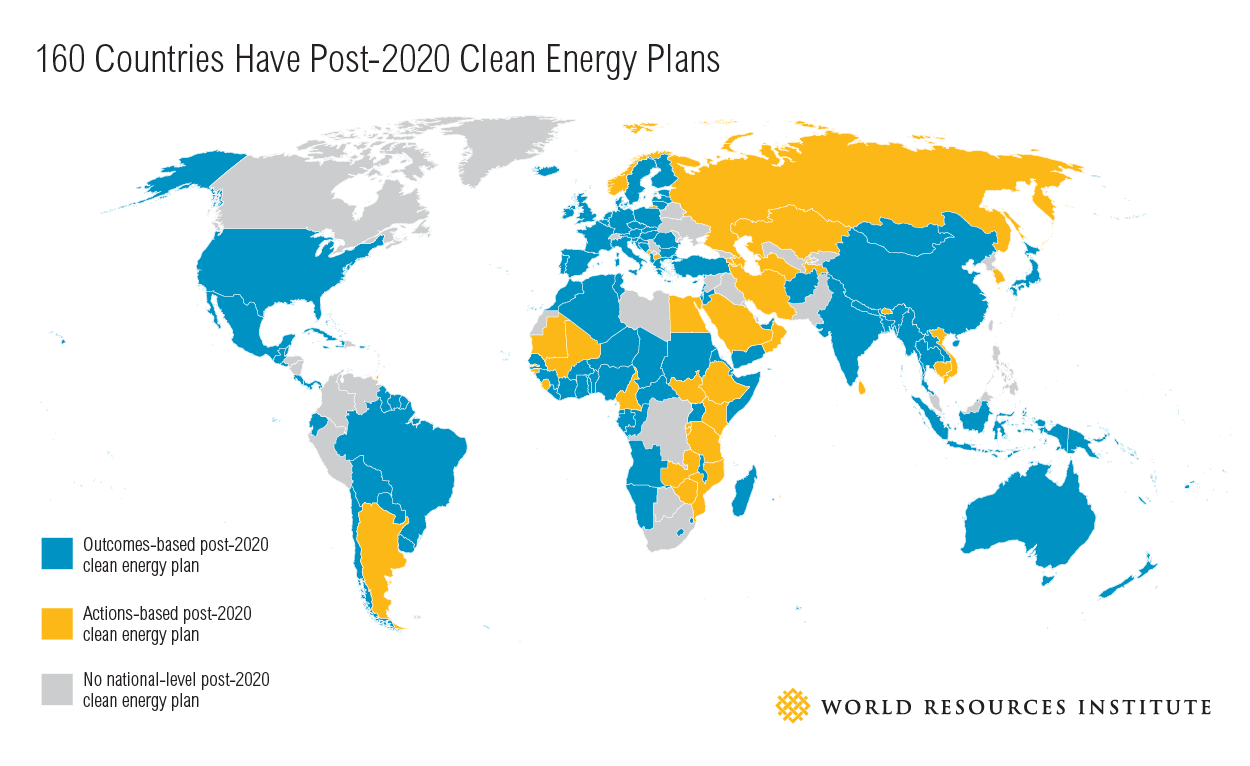 The sheer magnitude of these plans provides promising signals of countries’ intentions to transform their energy mixes and increase investments in clean energy. And while these plans go far beyond current policy scenario projections for the growth in clean energy, we know that we still need to go further to reach the long-term goals of the Paris Agreement and achieve net-zero GHG emissions by the second half of the century.

It’s now time for countries to put their clean energy plans into action, while at the same time look for opportunities to enhance ambition. CEM7 organizers have hinted that some countries plan to announce new clean energy actions at the summit. We’ll be watching for public/private partnerships to channel new investments toward clean energy, as well as the unveiling of innovative solutions to help spur the transition toward a greener global energy mix. With energy ministers from countries representing 90 percent of clean energy investments and 75 percent of global emissions, this summit presents an opportune moment to lay the groundwork for meeting (and beating!) countries’ clean energy goals.

i In November 2015, WRI released a technical note Assessing the Post-2020 Clean Energy Landscape. This note outlines the methodology and calculations used to quantify the post-2020 clean energy plans of Brazil, China, the European Union, India, Indonesia, Japan, Mexico, and the United States, based on data from the International Energy Agency (IEA)’s report “World Energy Outlook 2014.” Subsequent to publishing the technical note, the IEA released “World Energy Outlook 2015.” This blog presents updated results based on the latest IEA data, using the same methodological framework presented in the technical note.

ii For more information regarding the classification of countries’ clean energy plans, please refer to the technical note Assessing the Post-2020 Clean Energy Landscape. At the time that the note was released, only 127 INDCs had been submitted to United Nations Framework Convention on Climate Change (UNFCCC). The results presented here are based on an assessment of the 162 INDCs that had been submitted to the UNFCCC by April 25, 2016.