How much would a carbon tax reduce U.S. emissions?

The U.S. Energy Information Administration (EIA) found that if the country had set a carbon tax of $25 per ton in 2015 and increased it by 5 percent each year, CO2 emissions would have fallen to 32 percent below 2005 levels by 2030. But new research shows that this may underestimate a carbon price’s true potential.

In our new issue brief, Putting a Price on Carbon: Reducing Emissions, we outline the specific ways a carbon price (meaning either a carbon tax or cap-and-trade program) would encourage emissions reductions by changing the behavior of producers, consumers and investors throughout the economy. We compare these incentives to the corresponding forecasts in EIA’s model, and we find that the model is likely underestimating emissions reductions in important ways.

Take the electricity sector: A carbon price will increase the cost of electricity in proportion to the carbon content of the fuel, thus encouraging the replacement of high-carbon sources like coal with lower-carbon options like natural gas and renewables. The response of the U.S. electricity grid to price signals is remarkably rapid and strong—the figure below shows how coal usage has correlated with large shifts in natural gas prices in recent years. Computer model forecasts are designed to mimic such historical relationships, so natural gas usage is assumed to increase when a carbon price raises the relative price of coal-fired electricity.

Naturally, models are not as good at predicting relationships without a strong precedent, such as the replacement of fossil fuels with renewables. In fact, models are highly pessimistic about the future of renewables. For example, the costs of building a utility-scale solar photovoltaic plant have been declining at more than 10 percent per year, yet EIA assumes these costs in 2025 are no lower than the median cost of a plant installed in 2014. If the technology continues to improve—as industry experts expect it will—solar energy will be available to replace fossil fuel generation quicker and to a larger degree than computer models predict, thus increasing the effectiveness of a carbon price.

The same is true when you look at electricity use by individuals and businesses. Computer models again use past precedent as a guide, assuming electricity customers respond to a carbon price as they have responded to price fluctuations in the past. But consumers may be more responsive to price changes caused by taxes, and it’s easy to see why—few of us notice when our electricity rates change, but carbon-pricing legislation would be highly publicized. When the UK instituted a climate change-inspired tax on electricity in 2001, a study of commercial customers found a response over twice as large as estimates based on the EIA historical data would have predicted. Perhaps more importantly, using past consumer behavior as a guide misses major advancements in the electricity market—smart grids, time-differentiated pricing, and demand response programs are all designed to increase consumers’ responsiveness to price changes.

The Impacts of a Carbon Price Go Beyond the Power Sector

Beyond electricity, a major advantage of a national carbon price is the broad array of emissions-reduction activities it encourages. With a carbon tax or cap-and-trade program in place, households and businesses in virtually every sector of the economy have a financial incentive to reduce their carbon footprints. Any given emissions target can therefore be met more cost-effectively compared to a policy that requires all reductions from a single sector or region.

Yet outside the electricity sector, computer models assume carbon prices have little to no effect on emissions. The figure below displays the EIA’s emissions reductions forecast for its $25 per ton carbon price scenario. With minor exceptions, the model suggests that households and businesses do not to respond to increasing heating bills, manufacturers do not adjust to rising input costs, and neither producers nor consumers respond to the increased costs of transportation fuels. 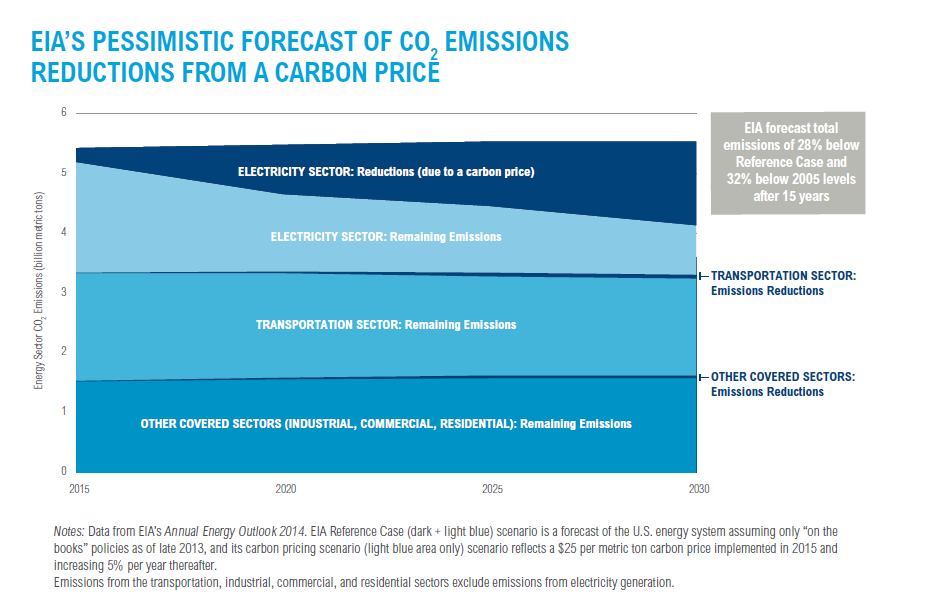 Any one of these pessimistic forecasts may come true, but it’s highly unlikely they will all come true. For example, while drivers are notoriously unresponsive to gasoline prices, transportation is changing with remarkable speed. The major auto manufacturers are almost all investing heavily in electric or fuel cell vehicles, and the growing “sharing economy” makes individual ownership less of a necessity. Ten years from now, the transportation sector could look more like the electricity sector, where small price signals have large effects.

Recognizing the Full Emissions Benefits of a Carbon Price

Our intention is not to pick on EIA, which provides an invaluable source of public information, and whose forecasts differ little from other prominent carbon-pricing studies. Still, all these pessimistic modeling assumptions combine to produce pessimistic results, selling short the benefits of a carbon price.

There is no doubt the exact effects of a carbon price are uncertain, but to the extent that our expectations are shaped by the modeling results, the bulk of the uncertainty points in the direction of greater emissions reductions than those forecasted. Alongside a smart portfolio of complementary policies, a carbon price can help us achieve our emissions targets—and at prices that may be lower than we think.