As the Paris COP approaches, national climate action plans—known as Intended Nationally Determined Contributions (INDCs)— and their associated emissions reductions have captured headlines. Less attention has been paid to the important fact that 121 countries – 86 percent of those who submitted INDCs -- also include an adaptation component in their plans.  These components outline goals, activities and needs for countries to cope with increased drought, stronger storms, sea level rise and other consequences of a warming planet.

Including adaptation in INDCs was optional, and the fact that almost all countries did so reflects the growing importance that nations—especially developing nations—are placing on adaptation as part of their response to climate change. As adaptation rises on the global agenda, the adaptation content of INDCs provides insight into issues that are likely to be key in finalizing and implementing the Paris agreement. 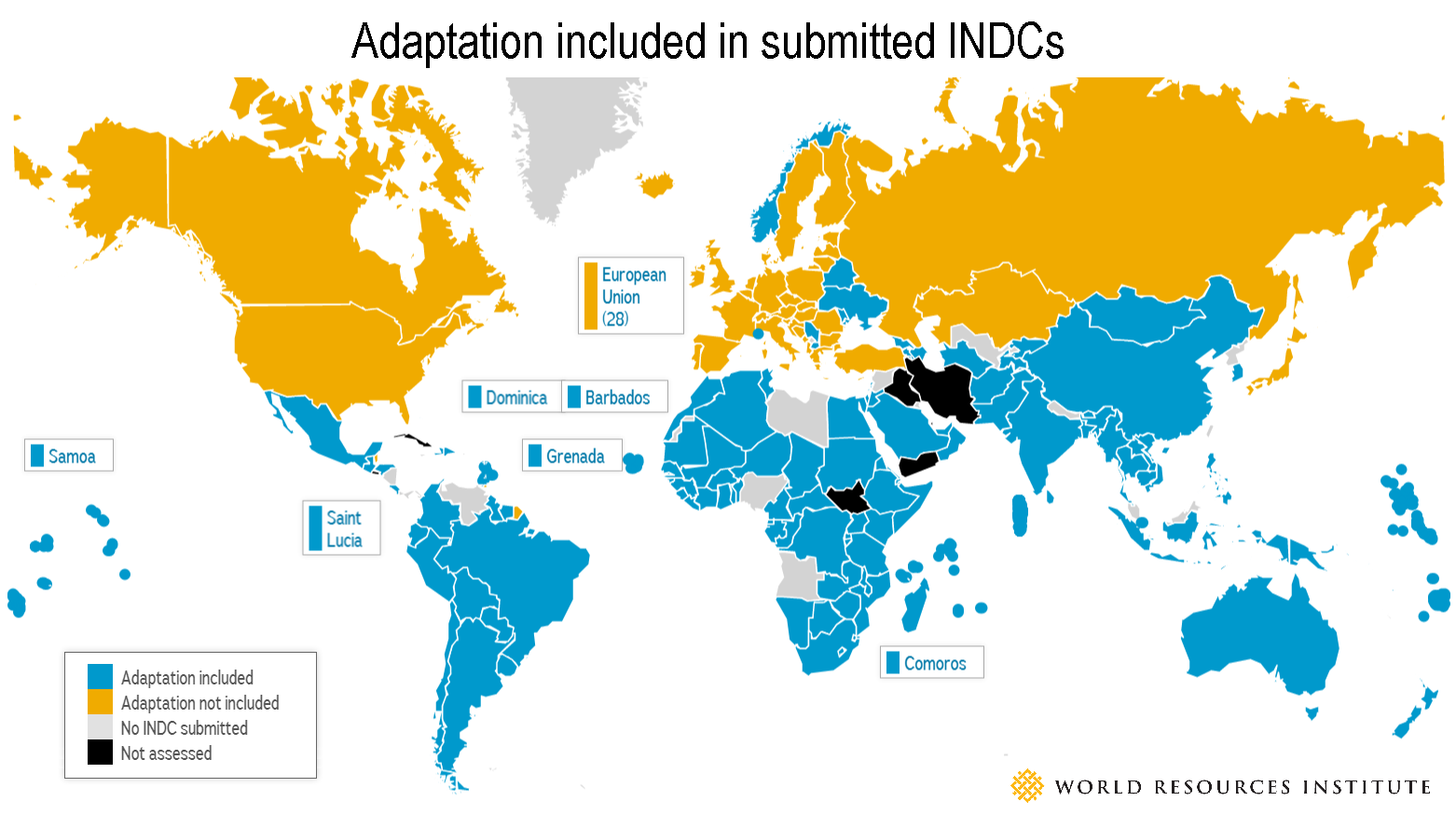 The diversity of adaptation goals in the INDCs reflects the fact that adaptation needs, priorities and activities vary greatly from country to country.  This means the Paris agreement needs to promote flexibility and country-driven approaches in how and what countries commit to do on adaptation.

For many countries, the impacts of climate change touch on all aspects of the economy, ranging from infrastructure to ecosystems to tourism. Many INDCs reflect this reality in long lists of sectoral activities needed for adaptation. Most commonly cited activities are in water, agriculture and human health.

Given this need to work across sectors, plus the short timeframe for preparing INDCs, few countries have truly used the INDCs to plan for adaptation.  Rather, the INDCs mainly synthesize and communicate adaptation activities identified and planned for in other national policies, plans or strategies—such as National Adaptation Programs of Action (NAPAs), national development plans or sectoral plans.  For example, Ethiopia draws heavily on its Growth and Transformation Plan and the Ethiopian Programme of Adaptation to Climate Change.  The Philippinesdraws on several national strategies and plans, including its National Disaster Risk Reduction and Management Plan.

Going into COP21, it is important to recognize the INDC adaptation component as a communications document instead of a plan because of the concerns expressed by developing countries that the Paris agreement might create onerous planning and reporting burdens. Experience with the INDCs suggests that communicating about adaptation actions and plans doesn’t need to be burdensome, and many countries can relatively quickly synthesize existing adaptation activities, plans and priorities into a short “snapshot.”

The adaptation components in most INDCs are valuable because they clearly identify existing gaps, barriers and resource needs that must be addressed to foster effective action. In some cases, countries go so far as to estimate the costs of adaptation and the likely economic impact of climate change absent adaptation. For example, South Africa’s INDC places the cost of its adaptation planning process at $170 million per year, and estimates costs of adaptation action for the post-2020 period under two specific mitigation scenarios.

As with mitigation, some INDCs indicate adaptation actions they can undertake with their own resources, and specify others for which they will require international support. For example, Central African Republic’s INDC includes a table of prospective adaptation measures, alongside the amount of funding they can cover from their own resources and the amount that will be required from international sources for full implementation.

INDCs Are a Roadmap for Global Adaptation Action and Support

Collectively, the adaptation content of INDCs begins to form a roadmap for the ways in which global cooperative efforts can most effectively and efficiently support and enhance adaptation action over time. Synthesizing this nationally determined information can help to identify global priorities and guide adaptation investment.

By building on the INDCs, the global community has the opportunity to create an iterative process—some call it a “cycle of improvement” for adaptation—through which periodic national adaptation communications can collectively inform decisions about ongoing international support.  This process of communicating national efforts followed by new commitments for supporting adaptation action moving forward will need to be a central element of the Paris negotiations.