China’s post-2020 climate action commitment, released earlier this week, is arguably one of the most anticipated climate announcements of the year.

The world’s largest emitter restated in its “intended nationally determined contribution” (INDC) its previously announced goal to peak its emissions around 2030 and increase its share of non-fossil fuels in primary energy consumption to around 20 percent by the same year. The latter will require China to deploy 800 to 1,000 gigawatts in non-fossil capacity, close to the United States’ total current electricity capacity. The country also builds on these commitments with additional announcements on carbon intensity, forests, adaptation and more.

While China’s INDC is overall a welcome development that helps build momentum for a new international climate agreement, there are still opportunities for the country—as for others, like the European Union and the United States—to go further this year and harness more of the benefits that stem from decarbonization. Here’s a look at the highs and lows of China’s new climate goals: 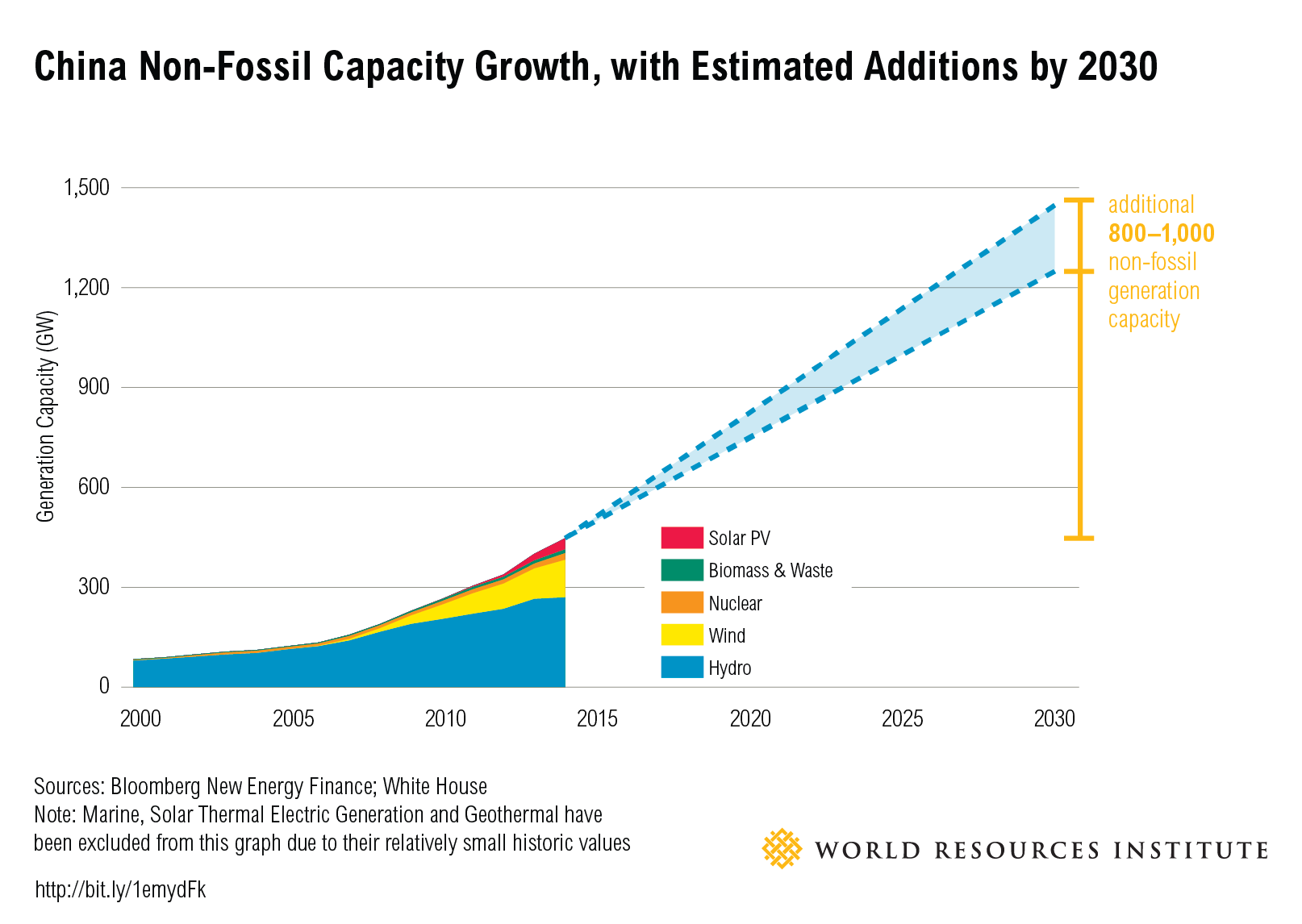 To achieve its non-fossil energy target, China will need to add significant capacity.

China’s INDC puts forward two new goals for 2030: Reducing CO2 emissions per unit of GDP (known as carbon intensity) by 60 to 65 percent below 2005 levels, and increasing its forest carbon stock volume by around 4.5 billion cubic meters from 2005 levels.

The new carbon intensity target builds on China’s existing target to reduce intensity 40-45 percent by 2020, and it’s roughly consistent with scenarios showing China’s CO2 emissions peaking in 2030. While this target demonstrates China’s intention to decouple carbon emissions from economic growth, some analysts suggest that China could peak its emissions much earlier and at a lower intensity . Indeed, the INDCs overall—both China’s and those of other countries, like the European Union and the United States—should be viewed as a floor rather than a ceiling on ambition.

The forest carbon goal—which debuted in China’s national climate change strategy late last year, but had not been formalized internationally until now—is particularly aggressive. Increasing forest carbon stocks by 4.5 billion cubic meters implies an increase in forest cover of 50-100 million hectares (124-247 million acres) of forest, or about two to four times the size of the United Kingdom. This amount of forest would create a roughly 1-gigaton carbon sink, equivalent to stopping tropical deforestation for almost a full year, or taking 770 million cars off the road.

China increased its tree cover by 49 million hectares (121 million acres) over 20 years, from 1990 to 2010. Reforesting 50 to 100 million hectares over just 15 years is a serious undertaking that will require enhanced efforts at rural outreach. Additionally, to deliver sustainable results, it’s important that China focuses on well planned reforestation efforts that improve rural livelihoods and ecosystem services, rather than on plantations and monocultures.

China’s INDC devotes considerable space to outlining the policies and measures planned for how it will achieve its stated mitigation and adaptation goals. While most of these plans are also reflected in national planning documents, their presence in the INDC gives them a higher profile and demonstrates China’s comprehensive plan to deliver on commitments.

A few highlights include plans to:

While limited in measurable targets, especially for the post-2020 timeframe, the INDC indicates that China is serious about moving towards a comprehensive framework for addressing GHG emissions, continuing to build on significant gains that have already been made. This can increase the international community’s confidence in China’s ability to meet or even exceed its targets.

Transparency in INDCs is critical for understanding how pledges will affect global emissions, for promoting trust and accountability among countries, and for tracking progress. While this is true for all countries, it’s especially important for large emitters like China.

WRI’s Open Book Initiative offers guidance, based on the Lima Call for Climate Action, on how countries can submit a transparent INDC. According to this framework, China has done well by:

However, there is also significant room for improvement, including:

A note published by China’s National Center for Climate Change Strategy and International Cooperation suggests that China has actively considered these issues; elevating this discussion to the international level would build confidence and trust.

With China’s submission, countries representing more than half of the world’s emissions have put forward their post-2020 climate plans. There are only five short months before a new international climate agreement will be negotiated. Now that China has formally committed itself to a lower-carbon future, hopefully other countries will be inspired to do the same.