The next 15 years will be transformative for India, which is poised to overtake China as the most populous country in the world. Prime Minister Narendra Modi’s new government has set its sights high, planning to achieve 8-9 percent GDP growth, provide access to energy for the 300 million Indians who lack it and improve urban development.

Yet the country is also grappling with harmful spillovers from its current growth model—severe air pollution and its damages to health, rising energy insecurity, excessive groundwater loss, as well as the costs of rapid but problematic urbanization, such as sprawl, congestion and reduced productivity. Reforming key socio-economic systems – namely, energy, agriculture and land use, and cities – can help boost economic performance and improve human well-being while tackling the costly side effects of India’s growth. As a new report from the Global Commission on the Economy and Climate shows, such reforms will also provide substantial avenues for the country to reduce greenhouse gas (GHG) emissions and climate change risks.

India’s economic prospects hinge on its ability to meet fast-rising demand for energy. Solutions must improve energy access and curb the harmful side effects of unchecked fossil fuel use.

Coal is a major part of the Indian fuel mix and is likely to remain so for some decades, but renewable energy is now presenting some unprecedented opportunities. Wind and solar costs are falling rapidly, and will likely fall well below the price of imported coal by 2020. Renewables can also provide greater energy security and reduce coal’s harmful impacts, such as dangerous air pollution. The government’s sustainable energy program is an ambitious move in the right direction: Solar targets for 2022 have been set to 100 gigawatts (GW), five times the previous goal. Wind capacity has doubled in just the last four years to 20 GW in 2013, with even higher targets expected shortly. The full potential for renewable energy in India is even higher, with an estimated capacity of 749 GW for solar and 2,000 GW for wind. 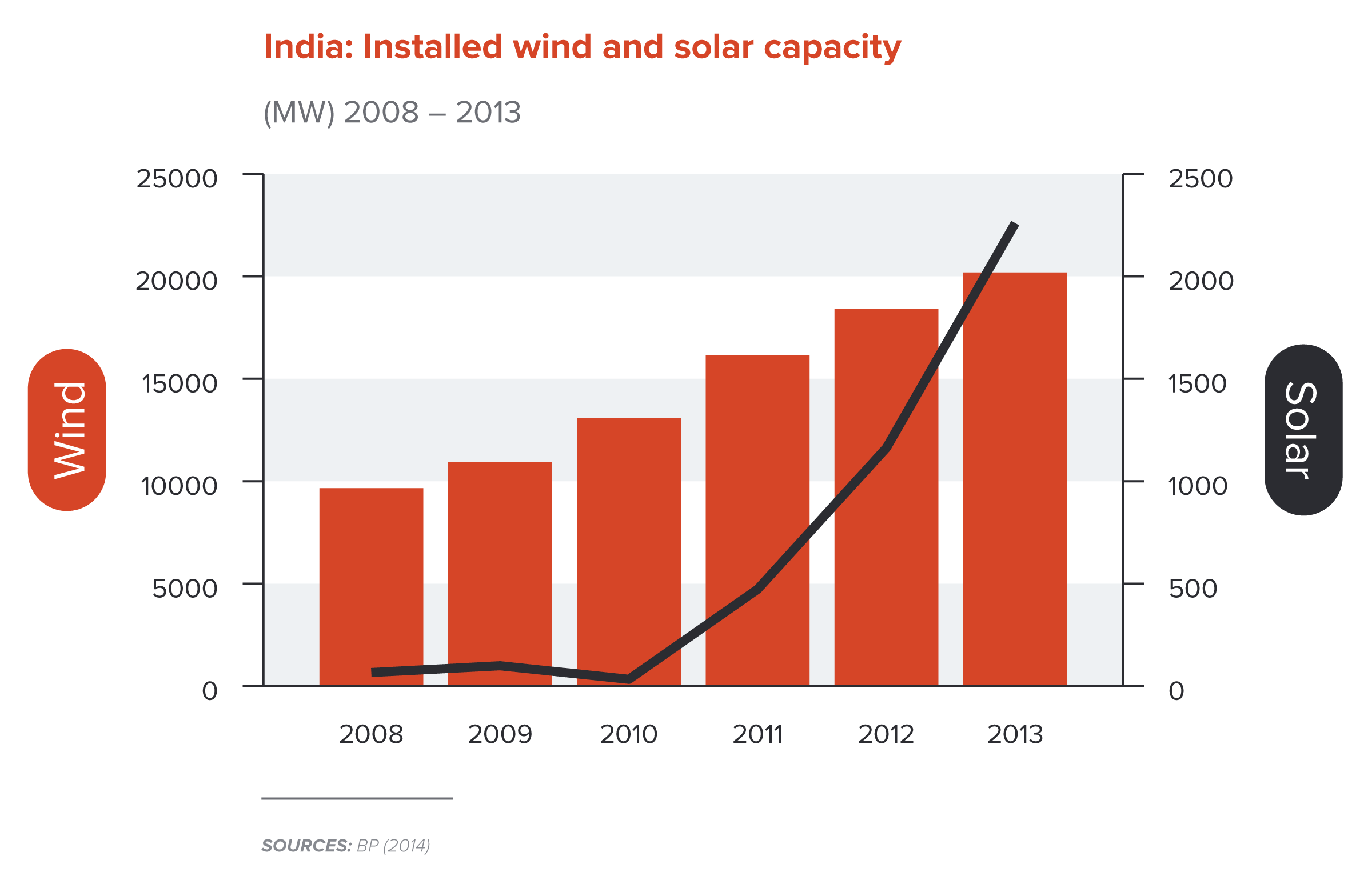 There are also huge opportunities to improve energy efficiency, starting with reforms to reduce fuel and power subsidies. Such subsidies are both economically inefficient and environmentally damaging—costing roughly 1.4 percent of GDP since 2007—and mainly benefit the wealthy. Though India’s government has recently begun scaling them back, the report recommends a comprehensive overhaul. Reforms in the electricity and fuel sectors can correct market failures and reduce crippling power sector losses. If there was ever a good time to do it, it is now. Low global oil prices mean the immediate effects of such reforms will be more easily absorbed. With the right social protection packages in place, subsidy reforms can also generate fiscal savings that can compensate those most vulnerable to higher energy prices.

Land Use and Agriculture

India’s agricultural sector faces significant risks from climate change. A 1°C increase in mean temperature could reduce wheat production by 6 million tons. However, agriculture can also be part of the climate change solution while contributing to economic growth. Innovations in agricultural productivity, water management and forestry have the potential to change the lives of more than 600 million people. The report recommends shifting public spending from agricultural subsidies – which do little for productivity while stimulating wasteful use of India’s scarce groundwater – towards rural infrastructure, education and agricultural research and development (R&D), which have much higher returns on investment. In the 1990s, for example, each rupee spent on fertilizer, power and credit subsidies generated less than a rupee of GDP, while one rupee spent on R&D generated almost 7 rupees of additional GDP.

In the next 15 years, India’s urban population will grow from 400 million to 600 million, with cities accounting for 75 percent of national GDP and 70 percent of all net new jobs.

However, urban sprawl, congestion and air pollution are reducing productivity. Half of the world’s 30 most polluted cities are in India, including the top four in the world: Delhi, Patna, Gwalior, and Raipur. Delhi’s air pollution level is sometimes as high as 15 times that which the World Health Organization considers healthy. 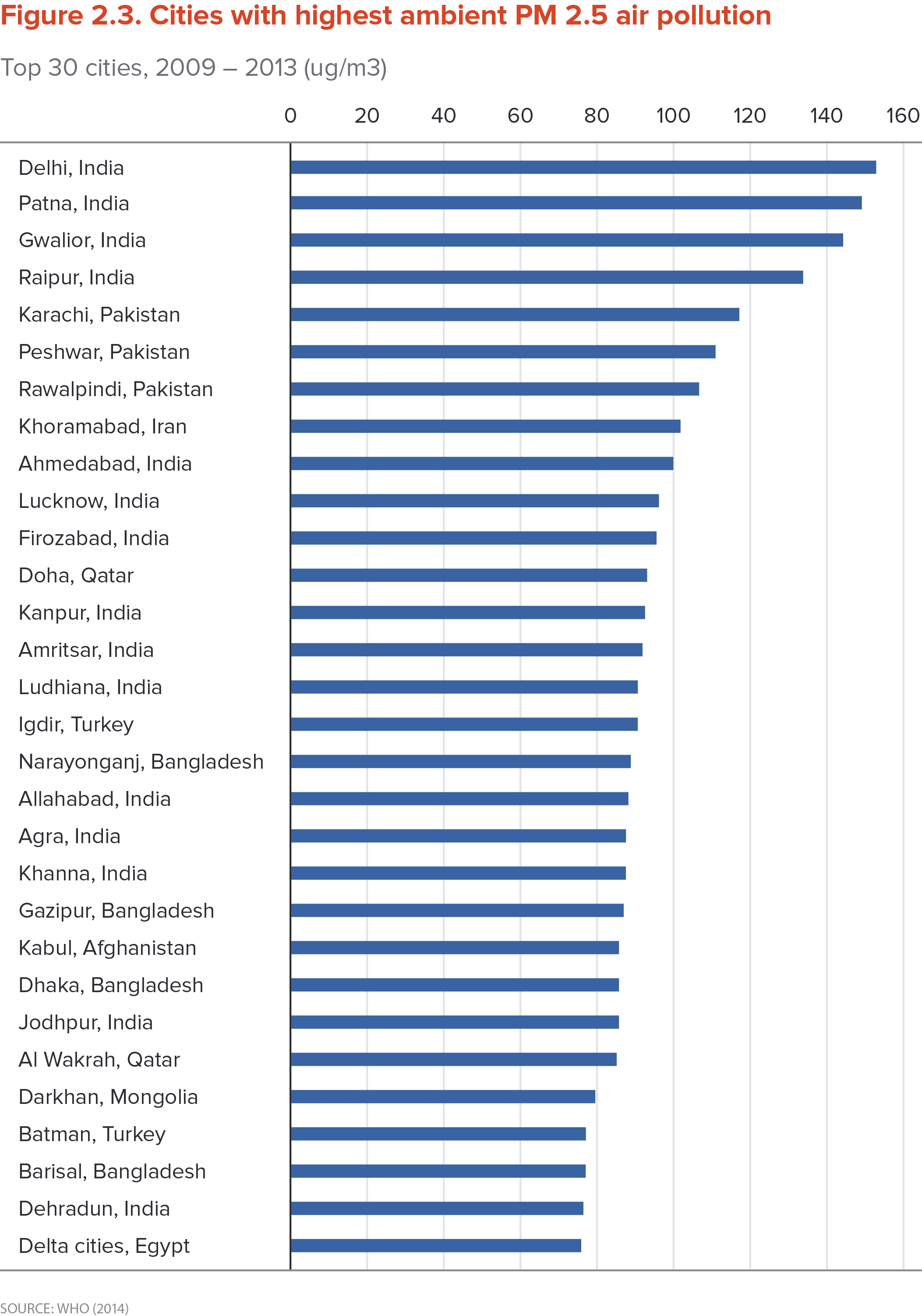 Research shows that designing compact and connected rather than sprawled cities can save $3 trillion globally over the next 15 years. India’s “100 smart cities” program is an exciting and much-needed initiative. Truly achieving sustainable urbanization will require putting the right policies and institutions in place. Some of the report’s recommendations include strengthening the hand of urban governments, updating building restrictions to help contain urban sprawl, and building better infrastructure to secure more public transit and more widespread access to tap water and sewer systems.

Implementation of these reforms will be challenging, but this is India’s moment: The Modi government has demonstrated a commitment to a more sustainable future. If it can deliver, India will be better positioned to have better growth and a better climate.