As negotiators get down to business at COP 20 in Lima, one of the key issues is the development of countries’ post-2020 plans to reduce greenhouse gas emissions, known as “intended nationally determined contributions” (INDCs). The international community has agreed to limit warming to 2°C in order to prevent some of the most disastrous impacts of climate change. One critical question is how to ensure that contributions are sufficient to meet this goal.

The latest climate science shows us what needs to happen to global emissions to have a likely chance of limiting warming to 2°C, but how do we translate these global numbers to the national level? How can a country design a contribution that is aligned with science when the 2 degree goal will be determined by the actions by all countries?

While there are a number of factors to take into account when considering what would constitute a fair national contribution, here are five principles countries should keep in mind to align their INDCs with the 2 degree target:

In the scenarios presented in the Intergovernmental Panel on Climate Change’s (IPCC) Fifth Assessment Report, emissions in all regions of the world must peak by 2020 for a cost-effective, likely chance of limiting warming to 2°C. While equity needs to be considered to determine which countries’ emissions should peak in any given year (such as 2015 versus 2025), countries should keep the global 2020 peak in mind when determining their own peak year.

2) Net GHG emissions must be phased out in the long term.

Both the UNEP Emissions Gap Report and the IPCC Fifth Assessment Report underscore the need for long-term transformation and reaching net zero emissions by the end of the century. The IPCC report states that emissions need to be “near zero or below in 2100,” while the UNEP report calculates that the world will need to phase out emissions between 2080 and 2100 to cost-effectively have a likely chance of meeting the 2°C target. Thus, countries should align their INDCs in the short-term with a long-term decarbonization pathway, and also consider putting forward a long-term emissions-reduction goal in addition to a short-term goal. 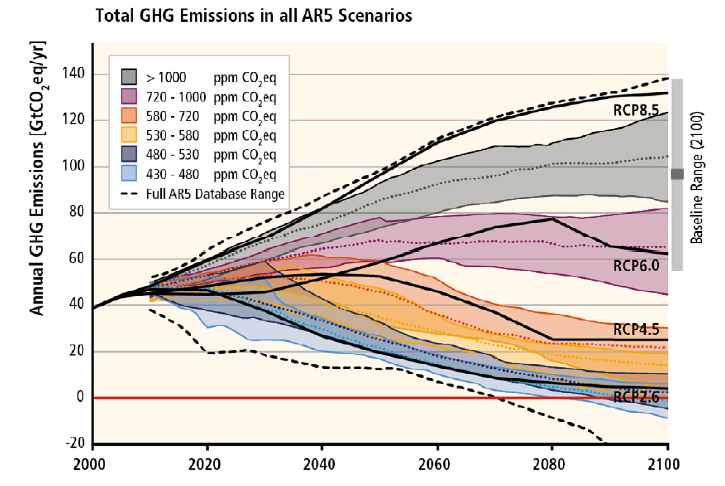 Phase out of emissions in the long term under RCP 2.6 Source: IPCC

3) We need to adopt a realistic “decarbonization” rate.

Delaying emissions reductions now and expecting a fast decline later will not only be costly, but may be technologically and socially unfeasible. Transitioning systems—such as turning over a fleet of vehicles or retrofitting power plants—takes a significant amount of time, as does changing behaviors and implementing new policies. In designing their INDCs, countries should not wait to reduce emissions steeply in later decades and should ensure that their annual rate of emissions decline, or “decarbonization,” is feasible given their peak year and phase-out year.

4) Emissions must be reduced significantly below business-as-usual.

The IPCC finds that all major emitting regions must make substantial reductions below their projected baseline emissions over the next century to have a likely chance of limiting warming to 2°C. Therefore, in designing an INDC, countries should ensure that their emissions trajectory is substantially below business-as-usual emissions.

5) Cumulative emissions must be limited.

One of the greatest advancements of the recent scientific literature is identifying the “carbon budget,” the maximum amount of cumulative carbon emissions the world can emit to have a likely chance of limiting warming to 2°C. The total carbon budget is 790 petagrams of carbon (PgC)1. We have already emitted 515 PgC—or 65 percent—and the remainder of the budget would be exhausted in about three decades if emissions continue unabated. Because cumulative emissions matter to the climate, countries putting forward INDCs should embrace “multi-year” goals, which limit emissions for a series of consecutive years (such as 2026-2030), rather than single-year goals, which only limit emissions in specific years, such as in 2025 or 2030.

In the absence of additional efforts, global temperatures are set to rise 3.7-4.8°C2 above pre-industrial levels by 2100. This level of warming would bring disastrous effects to the world’s communities and ecosystems.

But there is still a chance that we can meet the 2 degree goal. Over the coming year, countries have an opportunity to put the world on a different path by making their post-2020 emissions-reduction contributions science-based.