Last week, China’s Premier Li Keqiang toured Africa for the first time since he took office in 2013. Li visited Ethiopia, Nigeria, Angola, and Kenya, meeting with numerous heads of state to discuss the developing relationship between China and Africa. He capped off his visit with a pledge for an additional USD$12 billion in credit and funding to boost economic development on the continent.

It’s important to look at this announcement in the context of China’s briskly growing profile in the region. While investment from more developed countries has remained about the same in recent years, China’s flows to Africa have increased significantly, fueling excitement about development and concern about the effects on the environment and communities. As China’s impact increases, it can take steps now to make sure it sets a new standard for responsible lending and investment in Africa.

China’s Investment in Africa Is Growing

A look at recent statistics shows how rapidly the investment landscape in Africa has changed. According to Li, between 2014 and 2020, trade between China and Africa will double, and Chinese outward foreign direct investment (OFDI) stock (the total accumulated value of assets) to the continent will quadruple to $100 billion. Already, Chinese OFDI flows (the amount of investment in a given period) to Africa increased from $317 million in 2004 to $2.52 billion in 2012 (Figure 1), or by nearly 8 times. Though traditional OFDI sources like the United States and Europe still compromise the majority of investment in Africa, China’s contribution is steadily and quickly increasing. 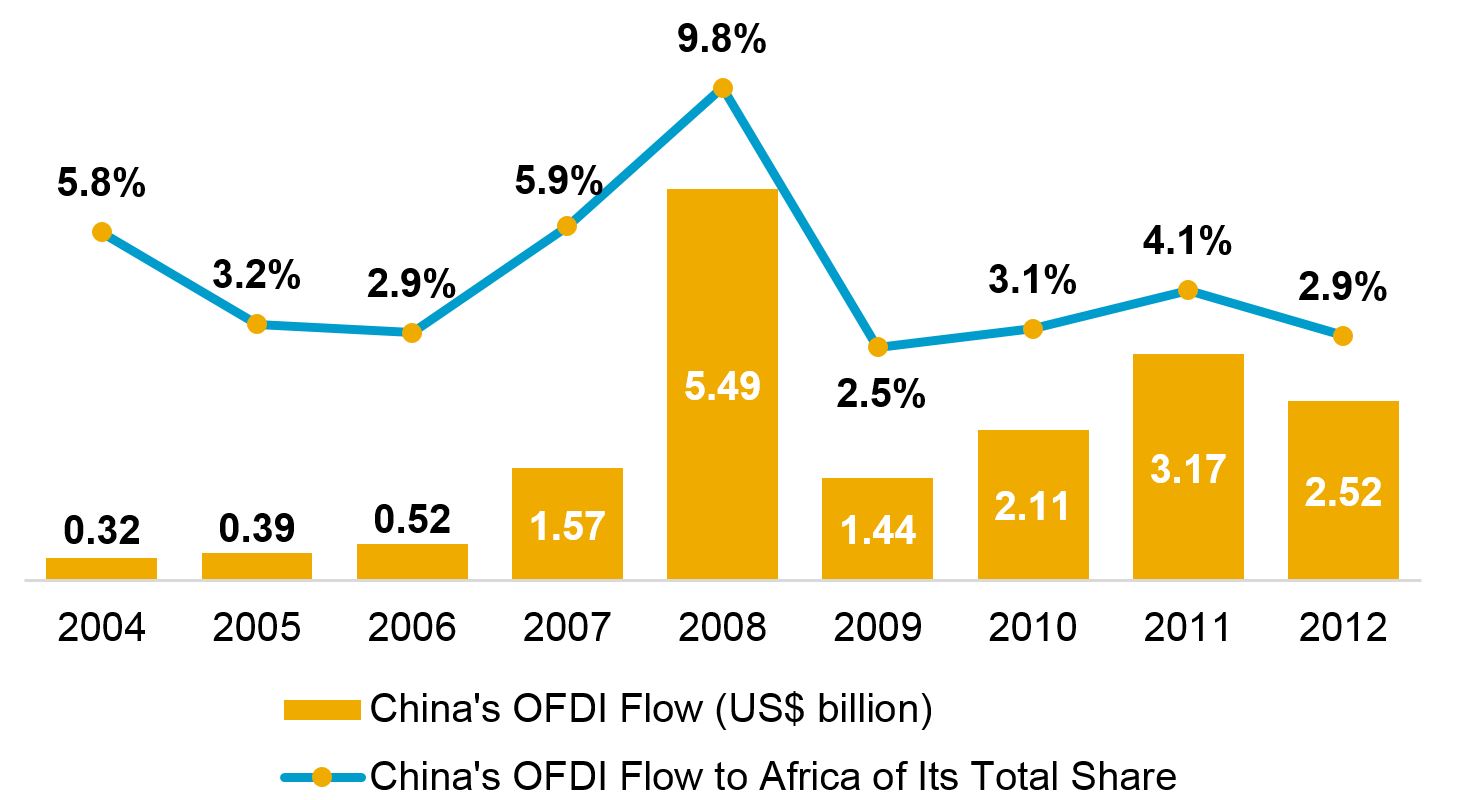 By 2012, China’s OFDI stock globally passed $531.94 billion, of which $21.73 billion, or 4.1 percent, was in Africa. In 2012, direct investment flows into Africa’s non-financial sectors reached $3.61 billion, with a year-on-year increase of 24.7 percent, while investment flows into the financial sector, such as banking, was -$1.10 billion (representing a loss, or decrease in value of assets). This indicates that investment in sectors with more significant potential environmental and social impacts— non-financial sectors such as mining and manufacturing—are rising more swiftly than the overall figures might indicate.

China is investing in a variety of sectors in Africa, and reaping a significant return on investment. More than 2,000 Chinese companies have invested in Africa, including in natural resource extraction, finance, infrastructure, power generation, textiles, and home appliances. (Figure 2) According to McKinsey, the rate of return on foreign investment is higher in Africa than in any other developing region. 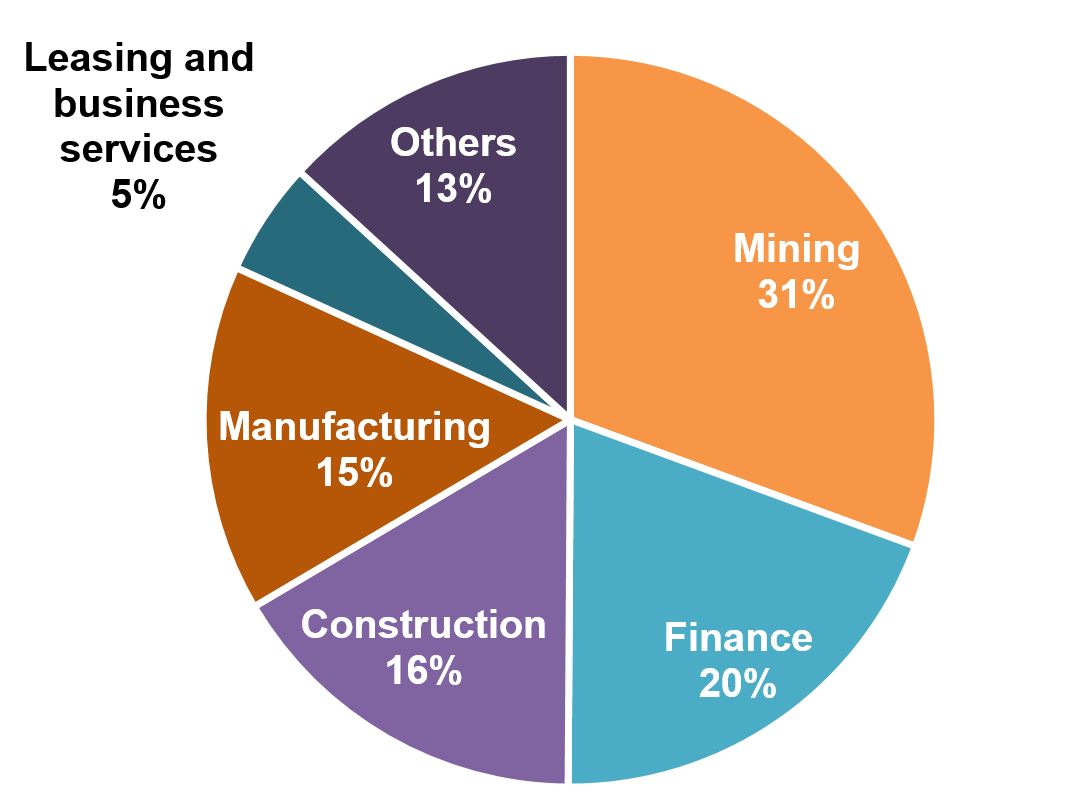 Source: WRI Sustainable Finance, based on figures from MOFCOM 2012 Statistical Bulletin of China’s Outward Foreign Direct Investment. Note: This chart indicates the initial destination of OFDI, as reported by MOFCOM; the final destination is undetermined.

The increasing amount of money flowing from China to Africa (and other developing countries in Asia and Latin America as well) creates both challenges and opportunities. Now is a crucial time to ensure regulators, such as governments and lawmakers in both recipient countries and China, follow good practices to prevent unwarranted harm to the environment and communities.

Because China is a relatively new actor in development finance at a large scale, it can benefit from the lessons and experiences of other countries. There are many examples of foreign investors and companies creating or becoming embroiled in significant financial, environmental, and social setbacks: Royal Dutch Shell in Nigeria, Shougang Group in Peru, and the Ilisu Dam in Turkey all come to mind. In many cases, strong and well-implemented environmental and social policies can reduce risk and ensure these types of financial relationships are mutually beneficial to investors and communities.

WRI’s Emerging Actors in Development Finance continues to explore this issue. The team examines the rapidly increasing financial flows from emerging economies, including from China and Brazil. Based on research and analysis, our team promotes robust social and environmental policies that prevent undue harm to the environment and communities and help investor and recipient countries maximize the benefits from investment. For example, we are currently examining foreign oil investment in East Africa, including Chinese oil investment in Uganda. In this project, we examine existing Chinese and Ugandan laws, company policies, and international practices, and determine how good practices can be applied to benefit both sides. Well-managed extractive industries have the potential to benefit communities, but poorly run operations can create serious political, economic, environmental, and social issues.

Economic development that is prudently planned and adheres to good practices can benefit local populations and does not necessarily place a large burden on the environment. However, such development has certain requirements, including oversight by regulatory bodies in both the lending and recipient country; clear regulation; cooperation between investors, recipient countries, and local actors; transparency of processes and decisions; and consultation with affected populations. It requires that both investor and recipient implement measures to anticipate, identify, and mitigate harm.

As China moves forward with its African investments, it will benefit itself, its investments, and the recipient countries to learn from past examples and come out as a risk-mitigating investor that follows good practices. Strong environmental and social policies—as well as objectives pertaining to development, environmental protection, and protection of vulnerable populations—are the key to a win-win China-in-Africa relationship.