This post is part of a series on World Water Week, an annual event designed to draw attention to and discuss global water issues. Read more posts in this series.

Our water systems are currently being threatened by the crops we grow and food we produce. In many countries, agriculture is the leading source of nutrient pollution in waterways—a situation that’s expected to worsen as the global population increases and the demand for food grows.

So it’s timely that next week’s World Water Week, an annual conference organized by the Stockholm International Water Institute, is focusing on water and food security.

WRI’s water quality team will be in Stockholm next week to discuss this very topic at a side event entitled, “Securing Water Quality While Providing Food Security: The Nutrient Question,” an event co-organized by Water Environment Federation and Environmental Defense Fund. This session, which takes place on August 29th, will build on the work WRI’s water quality team has done with its partner, Dr. Bob Diaz at the Virginia Institute of Marine Science, to evaluate the scale and scope of global nutrient-related water quality challenges, including how these issues are driven by agriculture.

Nutrient pollution in water, or eutrophication, is a problem that’s grown exponentially in the past 50 years. While nutrients like nitrogen and phosphorus are needed to grow food and maintain healthy ecosystems, too many of these substances can cause havoc in freshwater and coastal ecosystems. Fertilizers and manure from agricultural fields, as well as sewage and runoff from our urban centers are increasingly making their way into waterways, polluting these bodies of water with excessive amounts of nutrients.

Too many nutrients in the water can fuel large algae blooms, including toxic algae. This algae can smother the coral reefs and sea grasses that provide valuable habitat for aquatic species, result in fish kills, and shift the structure of aquatic ecosystems. Plus, when algae blooms die, they suck oxygen out of the water. Under the right conditions, these die-offs create hypoxic areas or dead zones, areas where fish and other aquatic creatures cannot survive. Globally, eutrophication of coastal systems has risen from fewer than 75 systems in 1960 to more than 800 systems today. Of these, more than 500 have experienced hypoxia. 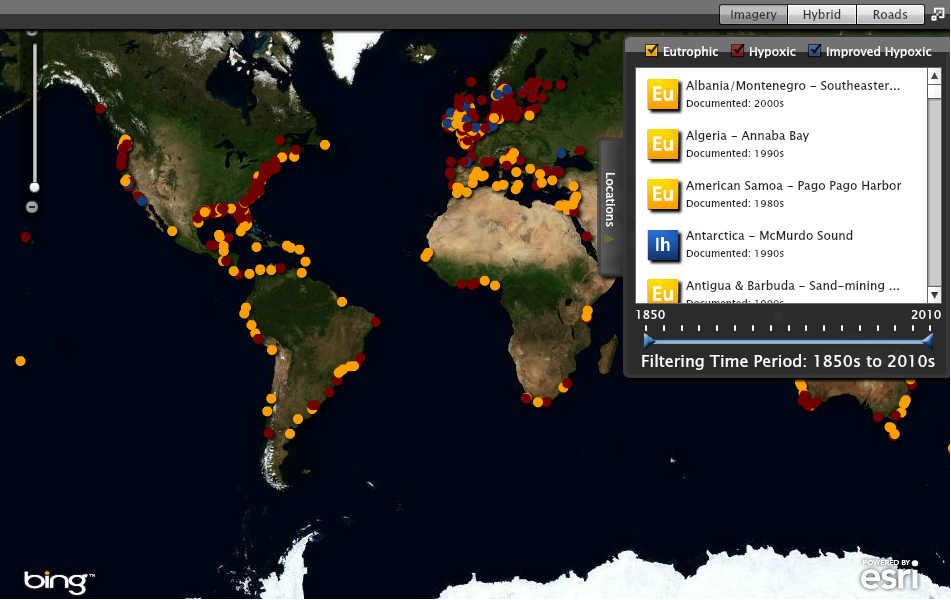 In many nations--including the U.S.--agriculture is the largest source of nutrients to our aquatic systems. Beginning in the early 20th century, people perfected a process for converting non-reactive forms of nitrogen into reactive forms that can be used as fertilizers. This spurred the Green Revolution, leading to a boom of fertilizer use and greatly increased crop yields.

But agricultural intensification had many unintended environmental consequences. Over the past 100 years, human activities have tripled the levels of phosphorus and doubled the levels of reactive nitrogen in the environment compared to natural levels. However, much of the nitrogen and phosphorus used to grow crops washes into rivers and streams during rainstorms or gets released into the atmosphere. Only 20 percent of the nitrogen used in agricultural production is actually consumed as food--the rest is lost to the environment, eventually making its way into our lakes, rivers and estuaries.

Eutrophication’s impacts have been felt financially as well. Symptoms of eutrophication—like algae blooms and fish kills—oftentimes result in economic losses to tourism and recreation industries, capture fisheries, and aquaculture operations. In 2009 for example, a massive toxic algae bloom off the coast of Maine led to the closure of commercial shellfish beds, crippling a $50 million industry and prompting the state to request disaster relief funds.

Eutrophication can also increase water treatment costs—or in some cases, render freshwater sources unfit to drink. A recent study by the Environmental Working Group estimated that the United States spends $4.8 billion annually to treat drinking water contaminated by too much nitrogen, while additional treatment for drinking water affected by nutrient-fueled toxic cyanobacterial blooms was estimated to cost between $12 million and $66 million for a town of 100,000 people.

As the global population marches towards 9 billion in 2050, we must consider how feeding those people will impact water quality. Producing food for a greater number of people will likely lead to increases in fertilizer use—the Millennium Ecosystem Assessment predicts that human-created nitrogen inputs will rise by nearly another 50 percent by 2050. In addition, there is a risk that natural landscapes like forests and wetlands, which naturally trap and filter nutrients and prevent them from flowing into waterways, will increasingly be converted to agricultural uses as food demands rise. In order to protect and maintain our water resources for future generations, it will be important to focus on developing sustainable agricultural policies that can help achieve food security without compromising our water quality.