Early last week, the strained electrical power infrastructure in northern and eastern India was pushed to its breaking point. Two days of power failures impacted a staggering 670 million people (or, put another way, more than the combined populations of the U.S., Canada, Mexico, Central America, and Brazil!) , leaving them in the dark and without air conditioning during a period of sweltering heat. India is now putting increased scrutiny on its power grid, with an independent audit already in the works. However, last week’s blackouts were created as much by pipes and pumps as they were by power plants and transmission lines. In many ways, the country’s power problems are symptoms of a growing water crisis.

So what does a series of blackouts have to do with a water crisis? More than you might think. Here are just a few examples that illustrate how water is at the root of India’s power challenge:

What Does the Future Hold?

The future of India’s water and power management are inextricably linked. With the direct financial impacts of those two days of blackouts estimated to be in the hundreds of millions of dollars, the risks water can pose to power must be better understood and managed in the coming years.

However, there is some concern that the path India is taking towards improving its power grid may be a dangerous one. A 2010 report by WRI found that 79 percent of new thermal and hydroelectric power plants planned for construction by the three largest power companies in the country were to be built in water scarce regions. WRI’s Aqueduct project created the map below, which shows that the trend of building power plants in places facing worsening water stress is prevalent throughout Southeast Asia. The blue spots show the locations of hydroelectric, nuclear, and thermal power plants, while the redder regions of the map are places projected to experience severe increases in water stress driven by climate change, increased water use, and economic development. 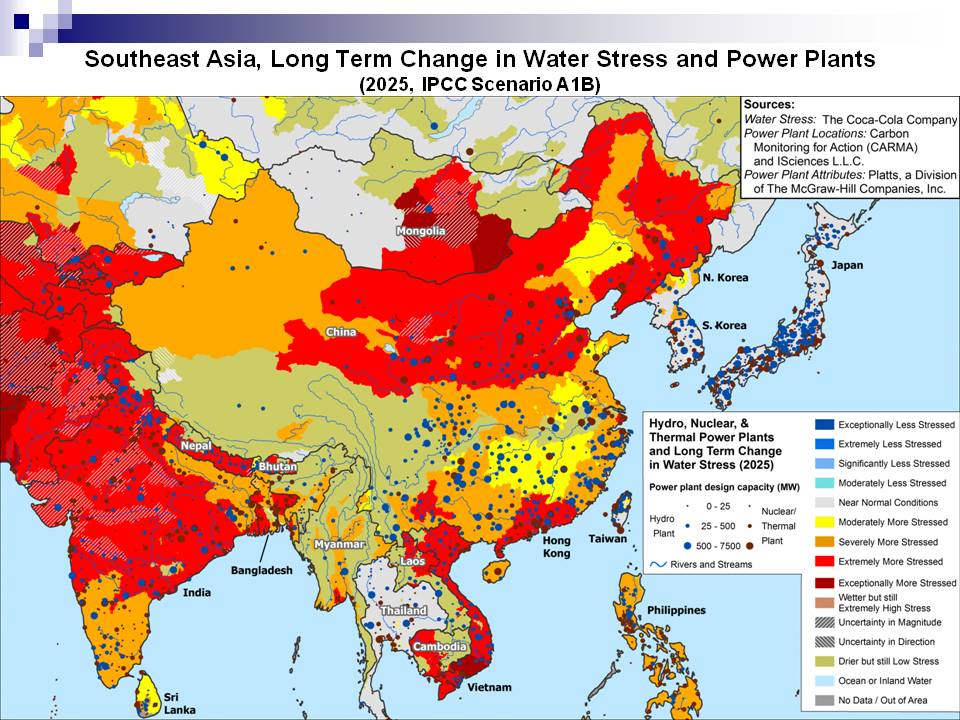 Location of Power Plants in Southeast Asia, and Projected Water Stress in 2025 - Aqueduct

While it is undeniably important for governments and other decision makers to increase electric power generation capacity to meet growing demands, these projects need to be planned in ways that consider a country’s resources. Decision makers will need to further their knowledge of current and projected water risks before adding to their grid capacity.

The complex relationship between water and power is just one of the ways water scarcity is shaping the 21st century. Water has similar relationships with food production, industry, security, and other facets of human civilization. As the ability of water to impact these other parts of our lives becomes more prominent, improving our understanding of water and water management has never been more urgent.