New research shows that Africa offers some of the greatest opportunities globally for restoring forests.

Tropical forest news last week was dominated by Indonesia and Brazil. Forest clearing has surged over the past year in parts of the Amazon, the Brazilian Government reported. Meanwhile, Indonesia’s President signed a moratorium on cutting some intact forest areas, as part of a landmark billion-dollar deal with international donors. But new research shows that Africa offers some of the greatest opportunities globally for restoring forests.

Investors are gathering this week in the Kenyan capital, Nairobi, to learn more. The meeting, hosted by the World Agroforestry Center, together with the World Bank’s Program on Forests and others, aims to help mobilize private investment in trees and landscape restoration in Africa.

With about half of the world’s original forest cover lost or degraded, interest is growing in planting trees to absorb carbon and to help communities better prepare for climate change. Restoring forests has many potential benefits. In the tropics, farming that includes more trees can be more productive and resilient to changes in weather patterns. Trees are also the primary source of fuel for most of the world's poor. Growing trees to produce charcoal and sell wood for fuel helps to pay the bills for millions of Africa's farmers. Growing trees also absorb carbon dioxide and so contribute to global efforts to combat climate change.

A new analysis, carried out by the World Resources Institute (WRI) and South Dakota State University, in partnership with the International Union for Conservation of Nature (IUCN) and the Global Partnership on Forest Landscape Restoration, found that about 450 million hectares of degraded land in Africa offer opportunities for forest restoration. This is an area the size of the entire European Union. 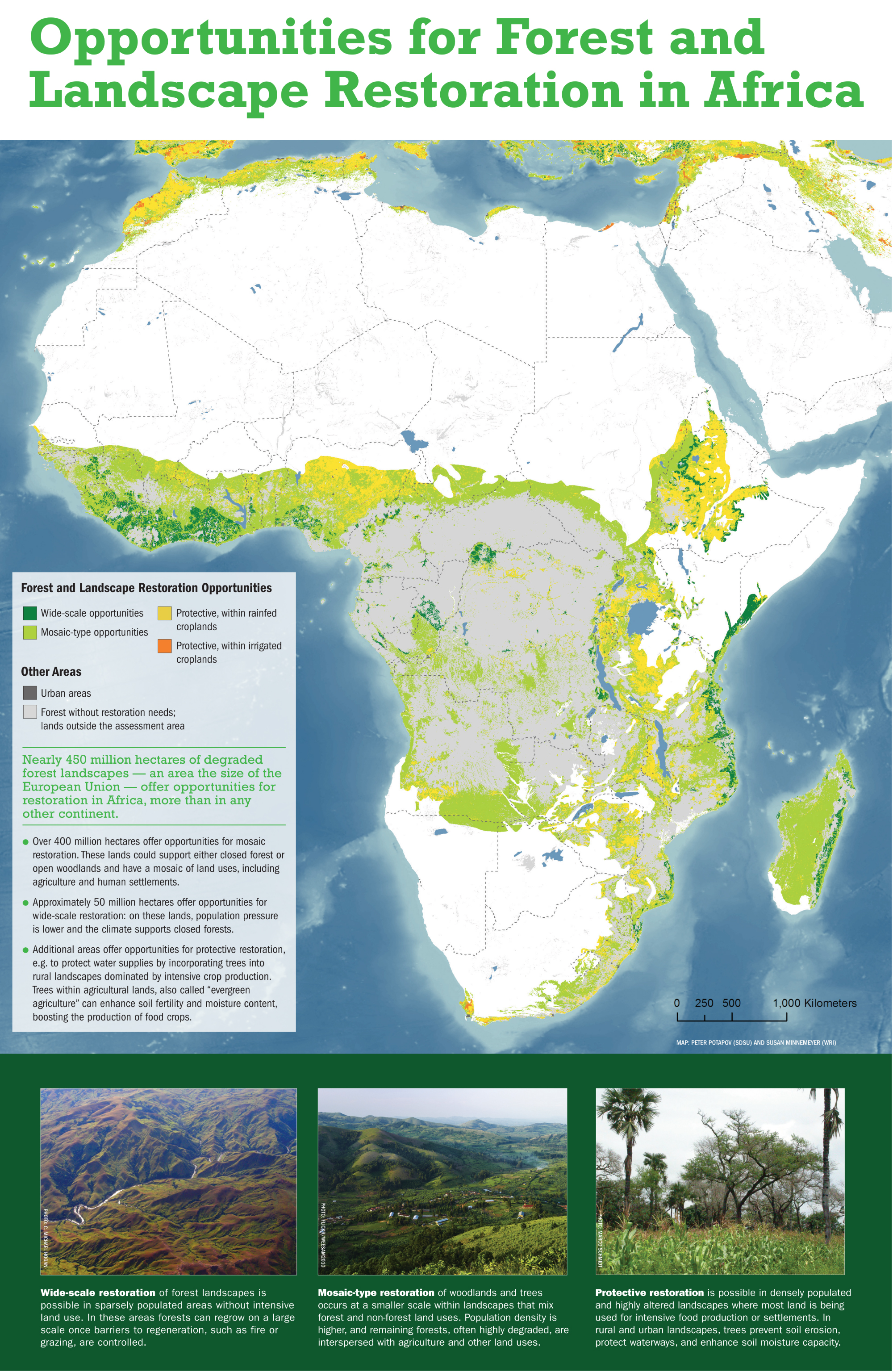 Restoration comes in various forms. Sparsely populated areas that are not intensively used may be suitable for wide-scale restoration. Here restoration may entail quite low investment, involving control of fire and grazing so that trees can naturally regenerate. Areas where land is more intensively used can be restored to tree cover in a patchwork pattern, known as "mosaic restoration". Even intensively farmed and developed areas can benefit greatly from "protective restoration", including the planting of trees to prevent erosion on steep slopes, along rivers and streams, to serve as windbreaks, and to provide shade along tracks and roads.

Recent experience from West Africa sees farmers putting the theory into practice. Niger, just a generation ago, was in the throes of mass famine, spreading deserts and entrenched poverty. Just 20 years later, over five million hectares of Niger has been restored to productive farmed woodland as the value of trees to enhance farm yield and provide income from fuel wood has caught on. Over 200 million new trees were planted, protected and managed as a result, and there is no sign of this movement stopping.

Others are being inspired to follow. Rwanda has committed to a nationwide effort to restore forests as a means to improve livelihoods, enhance food security, and safeguard water supplies and biodiversity. This dramatic move, supported by the United Nations Forum on Forests, and gaining donor interest, seems likely to be the first of several such efforts across Africa.

Leadership by national governments may be the key for catalyzing action and investment. In Rwanda, visionary efforts by the country’s leadership are leading to a pioneering process of policy reform to encourage tree planting. Niger's greening partly followed a revision of the law to crucially give farmers ownership of the trees growing on their land. Prior to this, all trees had belonged to the state. As democratic currents gained force in the country it was possible to shift control to farmers and thereby give them an incentive to manage the resource as their own.

Despite these positive steps, many challenges remain. As resources become scarcer, economies grow and demand expands for timber, palm oil, soya beans, and other commodities, remaining intact forests will come under increasing pressure. Efforts to combat deforestation in Brazil and Indonesia will continue to grab the headlines and need long-term support. But it may be the emergence of a steady and sustained effort to help trees grow in places where they used to that gains greater traction and makes more progress toward meeting human needs. The policymakers and investors gathering in Nairobi this week may well be onto something big.