Shenwu designs, produces and sells advanced industrial combustion and heating furnaces that employ the technology, known as high temperature air combustion (HTAC), which is based on the principle of recycling combustion air that is reheated at extreme temperatures. Through years of rigorous research, the company has developed patented HTAC systems that can reduce energy consumption by as much as 60 percent and decrease carbon emissions by at least 30 percent compared to traditional systems. The technology is so good that the Chinese government and World Bank have recognized Shenwu systems as one of the country's best energy saving solutions.

With this ability to generate massive energy savings, Shenwu customers can recover their investment costs in as quickly as six months. The result - hundreds of Chinese energy intensive companies are lining up to buy the combustion and heating furnaces. There are currently over 170 users of its system, which include China's biggest steel conglomerates, such as Shanghai Baosteel Group and Shagang Group. In fact, its market share of the Chinese steel industry's energy efficient heating sector stands at an impressive 70 percent. The company is also going global with a growing number of patrons in Japan, South Korea and Europe, such as Sweden's SSAB, Tata Steel and China Steel.

This boost in customers of course equates to skyrocketing revenues. The company's gross sales for 2007 will top over RMB3 billion, or US$400 million, a growth of over 100 percent from 2006. For 2008, the firm expects the figure to double to RMB6 billion (US$800 million). Just as impressive as the financials are the real environmental benefits. Shenwu estimates its technologies have reduced annual industrial energy consumption by the equivalent of 1.1 million tons of coal, thus cutting carbon dioxide emissions by over 5 million tons a year. This is a crucial feat for China which not only has some of the world's dirtiest skies, but is now estimated to surpass the United States as the number one global emitter of heat-trapping greenhouse gases. 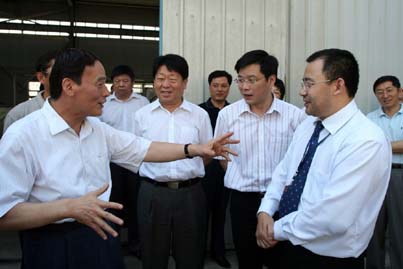 "We are working very hard to make our technology even more efficient," said Shenwu founder and chairman Wu Daohong, who holds a doctorate in rocket fuel combustion science and currently oversees over 800 employees in offices and research institutes across the country. At the age of only 41, he is frequently mentioned in the Chinese press as one of China's most promising entrepreneurs. Wu said Shenwu is aggressively expanding into the building, petroleum, chemical and glass manufacturing heating market. "Any business that requires heating furnaces, we will be there!"

Shenwu' road to prosperity has not been easy, with its path epitomizing the challenges of thousands of small Chinese companies trying to grow their way to success. When Wu founded the company in 1995 with a handful of staff, he financed the business entirely by himself without any bank lending or venture capital investment. To sell his heating furnaces, he traveled by train to meet with prospective customers, carrying the bulky equipment along with him. During his meetings with company executives, he would provide educational seminars on industrial energy efficiency and the technological advancements in heating systems. One of his first clients was a ceramics factory in the central city of Xi'an.

While Wu was able to turn a profit in his first year - earning over RMB100,000 (US$14,000), he soon ran out of funds when he put the money back into research. Again, with no bank or venture capital willing to provide him with cash, the aspiring entrepreneur relied on the most common source of financing for small Chinese businesses - friends and family. In 1996, he convinced a former professor to invest RMB200,000 (US$28,000) in his company.

Wu's breakthrough came in 2004 when a Tianjin-based steel company made a RMB80 million (US$11 million) order, eight years after Wu's first education seminar with the firm's executives. As revenues started to pick up, Shenwu was finally able to secure some bank loans and government subsidies. However, the company again was unable to receive venture capital from investors who still viewed the company as too risky. One firm that recognized Shenwu's potential introduced Wu to the World Resources Institute's New Ventures China program, which mentors promising sustainable Chinese small and medium enterprises in business development. After weeks of training, Shenwu strengthened its business strategy and was selected by a panel of judges as one of the best companies at the New Ventures China investor forum in 2004. "New Ventures has been a big supporter of us," said a thankful Wu. "The staff has really helped us in our development."

Thanks to its success, Shenwu nowadays has no problems finding interested backers. In December of 2007, the company announced that after being courted by more than ten private equity firms, it selected the Chinese partner of Goldman Sachs's private equity arm - Beijing Enterprise Holdings - to be one of its investors. Founder Wu has also met with representatives from the NASDAQ who are eager to have the company complete its initial public offering on the New York-based exchange. These achievements are indeed proof of how one company can make a difference when the founder not only has the drive, but also has the right support to do so.