A Roadmap for Integrating Human Rights into the World Bank Group 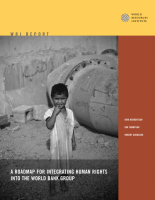 This report argues that human rights are an integral part of effective and sustainable development, and should be explicitly considered in all World Bank Group (WBG) investment decisions. We examine the WBG’s integration of human rights standards into its operations — highlighting accomplishments, shortcomings, and barriers — and suggest ways forward.

Our report draws on existing World Bank Group, UN, and civil society reports to create a snapshot of where the WBG is today, and discusses how we believe it is politically feasible to make further progress. The WBG’s activities affect a wide range of human rights, but we draw primarily from examples of rights of communities related to the environment and natural resource use.

Examples include access rights (access to justice, public participation, and access to information), the rights of indigenous and vulnerable communities with strong ties to the land, and rights to food and water. Although we do not examine the full range of human rights— which range from the right to education to freedom of religion—we believe that many of our observations and recommendations apply broadly.

In 2009, an internal survey of the World Bank revealed that overall, its staff considers human rights to be relevant to their work but are unsure how to implement them. Despite this interest, efforts to more systematically integrate human rights into WBG operations have met with resistance, particularly from the member governments on the governing boards.

In 2002, for example, the WBG’s president, James Wolfensohn, formed a task force to draft a strategy paper on human rights and the World Bank. The task force presented its report to the board’s development committee and recommended the adoption of human rights principles, but the committee did not approve the report. This was the last significant effort to engage the board on a comprehensive human rights strategy.

Even in the absence of a comprehensive human rights policy, many of the WBG’s activities promote rights both explicitly and implicitly. Several WBG programs, for example, promote gender equality and legal empowerment of the poor. Nevertheless, our analysis has concluded that the WBG’s integration of human rights remains low.

Purpose of this Report

This report argues that human rights are an integral part of effective and sustainable development, and thus should be explicitly considered in all World Bank Group (WBG) investment decisions. We examine the WBG’s integration of human rights standards into its operations—highlighting accomplishments, shortcomings, and barriers—and suggest ways forward. The international human rights framework has a complex and often politicized history. Human rights have traditionally been seen as duties held by a government with respect to each citizen in its jurisdiction.

Defining the role of other actors — whether private or intergovernmental—has proved more controversial. Human rights are also difficult to quantify, and thus difficult to manage. While many countries recognize a human right to clean water, for example, the question of how much clean water per day is essential for individual human dignity remains unresolved. Furthermore, the implementation of human rights remains a challenge.

The UN and numerous human rights organizations are working to clarify roles and responsibilities, help guide implementation and resolve key questions such as: which rights are universal? Do human rights refl ect cultural biases of western countries? How does the human rights framework help manage trade-offs when resources are scarce?

Given the complexity of human rights, we recognize the challenges of defining the appropriate role of the WBG. The WBG is owned by more than 180 countries with diverse traditions, has a culture of quantifying the costs and benefits of its investments at the level of national economies rather than individuals, and aspires to be respectful of the boundaries between its role and the role of governments.

We therefore do not advocate that the WBG should shift its identity from a development to a human rights institution. We argue instead that as a development institution, the goals and values that human rights represent are already at the core of the WBG’s mission, and that the explicit and systematic integration of human rights into WBG operations could improve its effectiveness by enhancing the WBG’s ability to manage risks and improve development outcomes. We hope this report will encourage staff and executive directors to begin examining how the WBG can incorporate human rights approaches beyond niche programs into mainstream activities.

In the past decade, a wide range of development actors, from private multinationals to international development agencies, has begun to use human rights standards as a means of managing risks and recognizing the rights of disempowered people, particularly the poor. In many cases these efforts respond to the growing incorporation of human rights—ranging from the right to life, food, and health to freedom from discrimination—into national constitutions and laws. The goals of human rights and development are inextricably linked and mutually reinforcing.

Upholding human rights can help ensure the success of a development project by addressing the root causes of poverty. Conversely, violations of human rights—such as the repression of dissent, loss of community access to food and water supplies, poor health conditions for local laborers, or discrimination against poor communities— can prevent the investment from generating net development benefits.

Despite this clear linkage, the integration of human rights policies and programming into the World Bank Group’s activities has met with resistance. The economic benefits of human rights protections are often difficult to quantify. As a result, the WBG has often judged investments successful on the basis of short term economic returns, rather than the extent to which they protect and promote human rights — particularly those of the poor. As this report discusses, this can raise risks that lead to the suspension of WBG investments, as it did in 2009 in the context of the entire oil palm sector.

Internal constraints are a major factor limiting the WBG’s ability to integrate human rights into its practices. The WBG’s governing boards have thus far failed to reach consensus on whether human rights risk management is within the explicit mandate of these institutions. Even governments that have supported human rights in other forums have been hesitant to discuss human rights at the WBG. This is despite the fact that in practice, the WBG’s safeguard policies already protect some rights of affected communities. This report argues that the failure of the WBG to more fully and systematically integrate human rights into its policies and programs has prevented these institutions from delivering on the development outcomes they seek.

Benefits of a Human Rights Approach

Human rights standards can help guide development institutions towards investments that focus on the needs and concerns of the poor and the vulnerable. Human rights standards can help empower citizens to engage in making development decisions, by directing attention to the structural causes of poverty, including discrimination, exclusion, lack of accountability, and abuse of state power. They are also increasingly employed as a tool for managing risks and measuring the effectiveness of development. And studies have shown that many countries that demonstrate a higher respect for human rights experience higher economic growth.

Many development institutions—such as UN agencies, the European Bank for Reconstruction and Development, and some private financial institutions that invest jointly in development projects—have begun integrating human rights into their operations in earnest.

The next few years offer an important opportunity to advance the dialogue and action on human rights in the World Bank Group. First, the balance of power is changing on the WBG’s board of directors, which so far has been reluctant to embrace a human rights approach. The previous voting structure allowed a small number of donor countries to determine WBG financing. In this environment, discussion of human rights risks opened the possibility that WBG donors would use financial conditionalities to coerce changes in national legal and governance systems, or to censure governments for their human rights records.

Now, however, a series of reforms are expanding the voting power of China, Brazil, India, and other emerging economies. The outcomes of these changing political dynamics are not yet clear. Reforms could lead to a complete dismissal of human rights integration at the WBG. But reforms could also lead to a greater willingness to discuss human rights risk management more openly without the risk of interference, because borrowing countries will have a greater voice in investment decisions.

As discussed in this report, one starting point for dialogue could be human rights risk management for the WBG’s private sector investments—many governments on the board have already endorsed the UN Framework on Business and Human Rights, which identifies key components of a corporate human rights risk management system. Numerous policy reviews are also underway at the WBG that open other opportunities for dialogue. Each of these policy reviews has a potential human rights component.

This report proposes eight time-bound goals for integrating human rights more explicitly and consistently into the World Bank Group’s policies, processes, and operations. We recommend that by 2015, the WBG increase the dialogue among its staff and board and introduce human rights risk management practices into its operations to achieve a “medium” level of integration. After 2015, we recommend adopting an institution-wide strategy for human rights integration, in a manner both politically feasible and consistent with the WBG’s mandate. This would enable the World Bank Group to use the international human rights framework as a means to empower communities, improve risk management, and strengthen development outcomes.