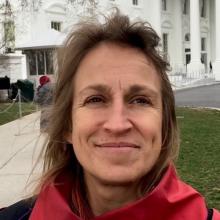 Prior to joining WRI she was working at IFC (World Bank Group) as a sector economist in the development impact department. She started her career at the EU as a labor market analyst, and as a forecaster and business cycle analyst; she worked on bilateral and multilateral economic relations, and headed the Economic and Financial Affairs section at the Delegation of the European Union to the United States in Washington, DC.

Valerie holds a PhD in international economics from the Graduate Institute in Geneva, and a master’s degree in political science and international relations from the Institut d’Etudes Politiques, Lyon.

She lives in Bethesda, MD, with her husband, two sons, and two cats.