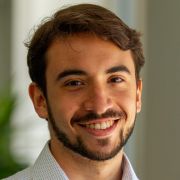 Tatsatom Gonçalves is a Research Analyst at WRI’s Energy Program, where he combines research, writing, data analysis, and outreach across a variety of U.S. and international projects.

As part of the American Cities Climate Challenge, Tatsatom trains and develops resources for U.S. local governments on subjects such as residential solar campaigns and aggregated procurement. He has also helped develop and continued to maintain the Local Government Renewables Action Tracker.

Additionally, Tatsatom conducts research on East Asia and Southeast Asia for initiatives such as the Clean Energy Investment Accelerator, aimed at expanding the use of renewables among corporations. He has facilitated major fundraising efforts and serves as the regional coordinator for an upcoming stream of work.

Prior to joining WRI, Tatsatom worked at The Nature Conservancy in New York City, where he focused on coastal climate resilience and water quality. He also spent a semester at the Middlebury School Abroad in Kunming, where he produced research in Mandarin on China’s national policies for wind and solar energy development.

Tatsatom is originally from the outskirts of Porto Alegre, Brazil and holds a B.A. in Environmental Studies and Geography from Middlebury College. He is passionate about learning languages and speaks fluent English and Portuguese; advanced Chinese and Spanish; and intermediate French and Italian. In his free time, he can often be found playing board games with friends and exploring urban bike trails in or near Washington DC.