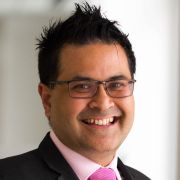 Prior to joining P4G, Ian worked at the Global Commission on the Economy and Climate, serving as Deputy Director of Global Strategy and Partnerships. In this role, he co-led the strategic direction, vision, work program, and funding strategy for the organization, and directed engagement with a network of more than 100 organizations. He has also co-led the integration of climate change within core humanitarian and development work of World Vision, one of the world’s largest international non-government organisations working in nearly 100 countries which included working on a large-scale forestry project for carbon markets in Africa. Ian has also helped shape large complex commercial transactions of public private partnership projects in infrastructure in Australia in the energy, resources, transport and urban planning sectors. Trained as a lawyer, Ian has held management positions in Australian government departments.

Ian holds an MBA degree from the Australian Graduate School of Management and a Bachelor of Laws and Bachelor of Commerce degrees (majoring in accounting and finance) from the University of Western Australia.

Originally from Australia, Ian lives in Washington DC with his wife and two kids.