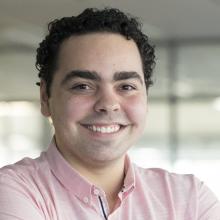 Felipe Martinez is the Pleno Events Analyst at WRI Brasil. As part of the Projects team, he assists in building proposals and researching new opportunities, as well as in the relationship between WRI Brasil Cidades Sustentáveis and its partners and supporters, at both the local and international level. In addition, he is responsible for organizing the institutional events held by the WRI Brasil’s Cities program.

Prior to joining WRI Brasil, Felipe was part of the team at the International Relations Office for the Porto Alegre Municipality, working in several international events, supporting the team in the relationship with international organizations and foreign representations, in addition to missions visiting the city.

Felipe holds a B.A in International Relations, with a focus on cultural studies as tools for analyzing international relations.