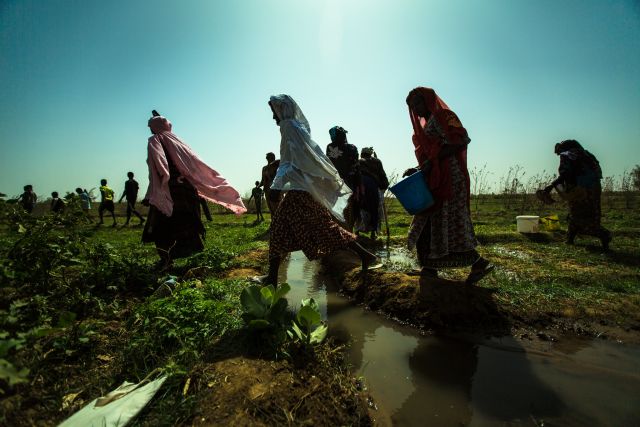 DHAKA, BANGLADESH (January 21, 2020) – At the Gobeshona Conference in Bangladesh, the Global Commission on Adaptation is launching an Action Track to significantly scale up finance and policies to help local organizations implement climate adaptation solutions. The Commission is led by Ban Ki-moon, 8th Secretary General of the United Nations; Bill Gates, Co-chair of the Bill and Melinda Gates Foundation; and Kristalina Georgieva, Managing Director of the International Monetary Fund.

Currently, only about 10 percent of international committed climate funds for local-level climate action makes it to the local level. Local groups are often not included in planning processes that affect them. The Commission aims to address these inequities. To do so, the Commission will convene grassroots and community groups, governments, and international donors to advance funding and policy mechanisms that enable local actors to strengthen their resilience to climate change.

The Commission aims to mobilize $500 million for locally led climate adaptation by the end of 2020 from major international and regional organizations. The Commission will also create two new tools that will enable governments and NGOs to track whether finance is reaching the local level, and to monitor and evaluate the impacts of locally led adaptation action.

The Locally Led Action Track builds on the Global Commission on Adaptation’s landmark report, released last September, which calls for strengthening the role of vulnerable groups and local actors in planning processes that affect their own lives. Building on a substantial body of research, the Commission finds that local actors can produce more effective adaptation, as they have local knowledge that can better inform solutions. Such a devolved approach can also help alleviate poverty by giving agency to vulnerable and disenfranchised communities.

Sheela Patel, Chair of Slum/Shack Dwellers International, and a Commissioner, said, “A major role of this Global Commission on Adaptation Action Track is engaging households, local community groups, and governments on how the climate crisis is exacerbating their vulnerability. The Commission is fulfilling an urgent need by bringing these groups together, so that local people can actively participate in producing solutions to increase their resilience. We must ensure that governments and other institutions direct more resources for climate adaptation to the local level so that people can reduce risks and improve their lives.”

Dr. Saleemul Huq, Director of the International Centre for Climate Change & Development, an Action Track partner, said, “I have been working with the most vulnerable communities in the most vulnerable developing countries to support their efforts to adapt to the adverse impacts of climate change for nearly two decades. We are calling on national governments and the global community to significantly step up their support for these vulnerable communities. I am very pleased that the Global Commission on Adaptation has prioritized locally led adaptation as one of the action tracks and that it is being launched at the Gobeshona conference in Bangladesh.”

This initiative is one of several Action Tracks that the Commission has launched as part of its Year of Action; others include food security and agriculture, finance and investment, nature-based solutions, water, resilient cities, and infrastructure.

Christina Chan, Co-Director of the Global Commission on Adaptation and Director, Climate Resilience Practice, World Resources Institute said, “Finance is failing to reach people on the frontlines of the climate crisis. This must change. It is of absolute importance to the Global Commission on Adaptation that not only more finance reaches local groups, but also that people facing climate impacts are able to take charge and determine which adaptation solutions work best for them.”

Bangladesh, one of 23 countries convening the Commission, has long been a leader on locally led climate adaptation. The country is the annual host of the Gobeshona Conference, which brings together distinguished climate adaptation researchers and practitioners, including this year the Prime Minister of Bangladesh, Sheikh Hasina and a video address from Ban Ki-moon.

• Bangladesh created disaster management councils and committees from the national to the local level, which have led to a dramatic reduction in deaths from recent cyclones.

• After Typhoon Ondoy hit the Philippines, people living in informal settlements along the Manggahan Floodway worked with decision-makers to advocate for their rights to housing and began designing their own climate-resilient homes.

• Least Developed Countries have pledged to develop strong climate finance architecture, with at least 70 percent of flows supporting local-level action by 2030 as part of their LDC Climate 2050 Vision and Compact and LDC Initiative for Effective Adaptation and Resilience (Life-AR).

The Commission is led by Ban Ki-moon, Bill Gates and Kristalina Georgieva. It is co-managed by the World Resources Institute and Global Center on Adaptation.