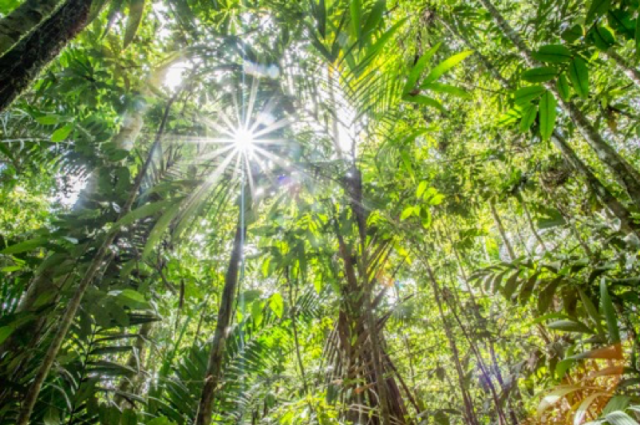 NEW YORK (September 25, 2019)—As the planet continues to warm and wildlife species vanish at an unprecedented rate, five leading environmental organizations have come together to target the world’s greatest undervalued and unprotected solution to the climate and extinction crises — forests. The organizations — Global Wildlife Conservation, Rainforest Foundation Norway, United Nations Development Programme, Wildlife Conservation Society and World Resources Institute—announced the new Forests for Life Partnership during an event celebrating the role of Nature-based Solutions at the U.N. Climate Action Summit in New York.

The world’s great forests remove around a quarter of CO2 humans add annually to the atmosphere. They sustain the livelihoods and cultures of many indigenous peoples, as well as maintain regional rainfall patterns more effectively than degraded forests. Forests also provide a place to live for 80 percent of the world’s land-based wildlife species, ensuring that they have food and resources and the pathways individual animals need to find one another for reproduction.

“We must all recognize that the foundation of all climate solutions depends on the continuing function of nature—including the world’s great intact forests that soak up a quarter of all humanity’s carbon emissions each year,” said Cristián Samper, WCS president and CEO. “The Forests for Life Partnership advances and champions the fact that intact forests are key to stemming and stopping the world’s global climate crisis and they are vital to preserving the world’s biodiversity, vital for all life on earth.

Despite the incredible benefits they provide, those forests that humans have disturbed the least—called “intact” forests—are being damaged rapidly. Fewer than a quarter of the world’s remaining forests are considered intact, and these forests are being damaged at twice the rate of forests overall. The primary causes of forest degradation include logging, demand for fuel and charcoal, illegal hunting, and clearance of land for industrial agriculture. Between 2000 and 2016, 9 percent of the planet’s most intact forests were damaged, and that rate is accelerating.

The Forests for Life Partnership aims to halt and reverse forest degradation across 1 billion hectares of the most intact forests worldwide. To do so, the partnership will focus on protection of the world’s most important forests for the combined goal of meeting global climate, biodiversity and sustainable development targets. Today the partnership is committing $50+ million over the next five years, with a goal to mobilize an additional $200 million from individuals, foundation, corporations, and governments through the launch of a dedicated Forests for Life Action Fund. As one of the first major regional cornerstones of the partnership, the 5 Great Forests of Mesoamerica Initiative launched at the U.N. Climate Action Summit September 22.

“The loss of the world’s great forests would prevent any comprehensive response to climate change, and would result in a catastrophic extinction event,” said Wes Sechrest, GWC CEO and chief scientist. “This is really an opportunity for the countries with these critically important forests to demonstrate global leadership in preventing the climate crisis and stemming biodiversity loss by protecting their own natural heritage. The Forests for Life Partnership is poised to help them do so.”

The initiative will focus on on-the-ground efforts with a network of local partners in up to 30 countries and the iconic regions of the Amazon, Congo Basin, New Guinea, the northern Boreal zone, as well as smaller but still critical intact forests across Mesoamerica, Madagascar, South and Southeast Asia and elsewhere. Protecting and restoring the great forests can help many countries meet the U.N.’s Sustainable Development Goals.

As part of this work, the partnership is committed to supporting indigenous communities, many of which protect vast expanses of the planet’s remaining forests. According to the International Land Coalition, indigenous peoples and their communities may hold up to 65 percent or more of the planet’s global land area.

“Indigenous peoples and local forest communities are in the frontline of the battle for these forests. Recognizing indigenous peoples’ collective rights and the critical role they play in conservation is key to protecting the remaining intact forests,” said Øyvind Eggen, director at Rainforest Foundation Norway.

“The world’s last great tracts of intact forests are priceless assets. This partnership is about keeping them secure—whether under the traditional stewardship of forest peoples or through field actions and policies to protect them against degradation and fragmentation,” said Rod Taylor, Global Director, Forests, World Resources Institute.

“Nature-based Solutions are increasingly recognized as critical to raising climate ambition and healthy forests can be an important element," said Tim Clairs, Principal Technical Advisor, REDD+ Team, UNDP. "Through this partnership we can work to support efforts of countries to include the full value of their forests in their Nationally Determined Contributions.”

The Forests for Life Partnership is announcing the new venture on the last day of Nature’s Climate Hub, four days of programming organized by the Nature4Climate coalition during the U.N. Climate Action Summit that showcased nature-based solutions in policy, in practice, and in communities. Wildlife Conservation Society is hosting the final day of the hub, today, at the Central Park Zoo, including a closing rally and evening reception on the Power of Nature in a Planetary Emergency.

WCS saves wildlife and wild places worldwide through science, conservation action, education, and inspiring people to value nature. To achieve our mission, WCS, based at the Bronx Zoo, harnesses the power of its Global Conservation Program in nearly 60 nations and in all the world’s oceans and its five wildlife parks in New York City, visited by 4 million people annually. WCS combines its expertise in the field, zoos, and aquarium to achieve its conservation mission. Visit: newsroom.wcs.org Follow: @WCSNewsroom.

RFN is working for a world where the environment is protected and human rights are fulfilled. Our specific focus is the intersection - in the rainforest - of these two worldwide struggles. Learn more at www.regnskog.no/en.

UNDP partners with people at all levels of society to help build nations that can withstand crisis, and drive and sustain the kind of growth that improves the quality of life for everyone. On the ground in nearly 170 countries and territories, we offer global perspective and local insight to help empower lives and build resilient nations. www.undp.org

WRI is a global research organization that spans more than 50 countries, with offices in Brazil, China, Ethiopia, India, Indonesia, Mexico, the Netherlands, the United States and more. Our more than 800 experts and staff work closely with leaders to turn big ideas into action at the nexus of environment, economic opportunity and human well-being. Learn more at www.wri.org.