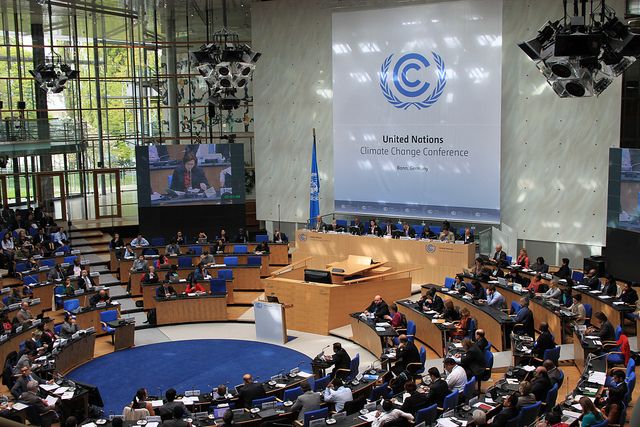 Quantitative analysis of realistic funding scenarios to achieve internationally recognized goal estimates finance could total to $155B by 2020.

BONN, GERMANY/WASHINGTON (3 June 2015)—New analysis from World Resources Institute finds countries can achieve the goal of mobilizing $100 billion per year in international climate funding by 2020. The new paper finds the goal can be reached through multiple pathways and will require bringing in funding from various sources, including the public and private sectors.

Getting to $100 Billion: Climate Finance Scenarios and Projections to 2020 is one of the first quantitative analyses of funding scenarios to achieve the $100 billion goal. WRI’s paper finds greater clarity and stronger commitments will be necessary to reach the funding target, but if all considered sources are included, climate finance could total $109 to $155 billion in 2020 under projections of low/medium growth and leverage.

“An international climate agreement at COP21, including agreement on finance, depends on developed countries providing a credible pathway to honor their commitments with strong provisions for predictable and adequate climate finance,” said Athena Ballesteros, director, sustainable finance initiative, World Resources Institute. “While $100 billion is not sufficient on its own to create a low-carbon transformation, it is an important political goal to signal developed countries’ are committed to scaling up climate finance.”

Four public and private financing sources that might count toward the $100 billion goal are grouped into potential funding scenarios and projected forward from 2012 to 2020, using various growth rates and assumptions about how much private investment could be leveraged by public dollars. All four potential pathways require steady increases in public finance and inclusion of new funding sources to reach the $100 billion by 2020 goal:

“Forging an agreement on the path to $100 billion is essential to build trust and bring countries together ahead of the Paris climate conference in December,” said Michael Westphal, senior associate, WRI and the paper’s lead author. “We urge negotiators to use the report’s recommendations as a political middle ground to move the world toward the $100 billion goal.”

Getting to $100 Billion outlines three key recommendations to achieve a credible and politically feasible path forward:

“As stated by President Hollande, we can’t secure an agreement in Paris without an agreement on finance,” said Pascal Canfin, senior advisor for international climate affairs, WRI. “Therefore, showing a credible and balanced pathway towards the $100 billion goal is an issue of strategic importance for the upcoming G7 summit.”