RELEASE: 85 Percent of Reefs in the Coral Triangle Are Threatened, New Report Finds 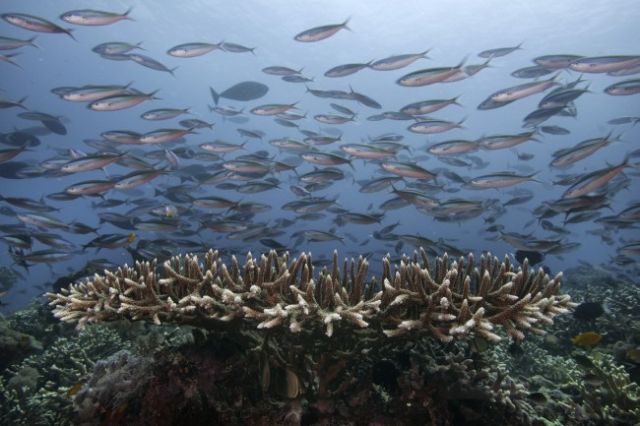 A new report finds that more than 85 percent of reefs in the Coral Triangle are directly threatened by local human activities, substantially more than the global average of 60 percent. Reefs at Risk Revisited in the Coral Triangle shows that the greatest local threats to reefs in the countries that make up the Coral Triangle —Indonesia, Malaysia, Papua New Guinea, the Philippines, Solomon Islands, and Timor-Leste—are overfishing, watershed-based pollution, and coastal development. When these threats are combined with recent coral bleaching, prompted by rising ocean temperatures, the percent of reefs rated as threatened increases to more than 90 percent.

“Across the Coral Triangle region, coastal communities depend on coral reefs for food, livelihoods, and protection from waves during storms, but the threats to reefs in this region are incredibly high,” said Lauretta Burke, senior associate at WRI and a lead author of the report. “Reefs are resilient—they can recover from coral bleaching and other impacts—particularly if other threats are low. The benefits reefs provide are at risk, which is why concerted action to mitigate threats to reefs across the Coral Triangle region is so important.”

The Coral Triangle features immense biodiversity–it contains nearly 30 percent of the world’s coral reefs and more than 3,000 species of fish—twice the number found anywhere else in the world. More than 130 million people living in the region rely on reef ecosystems for food, employment, and revenue from tourism.

“The influence of coral reefs on the most important aspects of people’s lives cannot be overstated,” emphasized Katie Reytar, research associate at WRI and a lead author. “The influence extends far beyond the Coral Triangle to people around the world who benefit from the fisheries, tourism, medicines, and numerous other services that reefs provide.”

The report calls attention to the vulnerability of coral reefs in the Coral Triangle and factors leading to degradation and loss. The report shows that:
* On the list of countries most vulnerable to social and economic impacts from the loss of coral reef services such as food, employment, and shoreline protection, five of the six Coral Triangle countries topped the list;
* An assessment of the existing coverage and management effectiveness of marine protected areas (MPAs) in the Coral Triangle found that 16 percent of the region’s coral reefs are inside MPAs, which is substantially lower than the global average of 28 percent;
* Less than one percent of MPAs in the Coral Triangle were found to be fully effective at reducing threats such as overfishing and destructive fishing.

Alan White, a contributing author to this report and senior scientist at The Nature Conservancy and partner in CTSP, noted that “while there is still room for improvement in increasing the effectiveness of MPAs, especially large MPAs that require significant resources to manage, a lot of progress has been made in building up awareness about reef protection at the local level and in providing communities with the tools and resources to manage the reefs that they depend on.”

Considered the center of coral diversity in the world, Reefs at Risk Revisited in the Coral Triangle illustrates the vulnerability of the region’s reefs and highlights strategies to protect them. Among the many recommendations offered in the report for protecting reefs in the Coral Triangle, the most urgent is to reduce local pressures such as overfishing, destructive fishing, and run-off from land.

“Reefs at Risk Revisited in the Coral Triangle is an important contribution for supporting the six Coral Triangle countries in making critical decisions related to protecting their marine resources,” said Maurice Knight, a contributing author and Team Leader for CTSP. “The region-wide perspective on the status of coral reefs as depicted in this report demonstrates the urgency of the situation and the need for immediate action.”

Healthy reefs are more likely to survive the negative effects of climate change, such as coral bleaching caused by higher ocean temperatures or reduced coral growth rates due to increased ocean acidity. Tackling the local threats first will buy reefs time until the global community can reduce greenhouse gas emissions.

The new report was adapted from WRI’s landmark 2011 global analysis of threats to coral reefs, Reefs at Risk Revisited, supplemented with more recent and detailed data for the Coral Triangle region.