More than Meets the Eye

The Social Cost of Carbon in U.S. Climate Policy, in Plain English 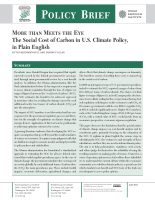 This policy brief explains the various steps in calculating the social cost of carbon, the weaknesses and strengths of those calculations, and how they are used to inform climate policy. The aim is to help policymakers, regulators, civil society, and others judge for themselves the reliability of using the resulting numbers in making policy decisions.

Presidents since Ronald Reagan have required that significant rules issued by the federal government be accompanied through intra-governmental review by a cost-benefit analysis. In addition, the Obama administration (like the Bush administration before it) has imposed a requirement to assess climate regulation through the lens of a figure (or range of figures) known as the “social cost of carbon” (SCC). The SCC estimates the benefit to be achieved, expressed in monetary value, by avoiding the damage caused by each additional metric ton (tonne) of carbon dioxide (CO2) put into the atmosphere.

The impact of SCC numbers is not theoretical and has consequences for the government regulatory process and therefore for the strength of regulations on climate change that emerge from it. Application of this tool can be problematic to achieving optimum outcomes for society. A growing literature indicates that developing the SCC requires assumptions that go well beyond the usual boundaries of science or economics. It requires many judgment calls that are hidden in complex economic models and largely invisible to policymakers and stakeholders. The Obama administration has formulated a standardized approach to estimating the SCC for all new federal rules issued that would regulate greenhouse gases. In the case of climate change, the government calculates the cost imposed on society globally by each additional tonne of carbon dioxide (CO2), the main greenhouse gas. These include health impacts, economic dislocation, agricultural changes, and other effects that climate change can impose on humanity. The benefit to society of avoiding those costs is summed up in the social cost of carbon.

In 2009 an interagency team of U.S. government specialists, tasked to estimate the SCC, reported a range of values from $5 to $65 per tonne of carbon dioxide. The choice of a final figure (or range of figures) is, in itself, a major policy decision, since it sets a likely ceiling for the cost per tonne that any federal regulation could impose on the economy to curb CO2. At $5 a tonne, government could do very little to regulate CO2; at $65, it could do significantly more. Higher SCC numbers, such as the United Kingdom’s range of $41–$124 per tonne of CO2 with a central value of $83, would justify, from an economics perspective, even more rigorous regulation.

This paper discusses the limitations that the special nature of climate change imposes on cost-benefit analysis and its constituent parts, primarily focusing on the estimation of the SCC. It explains in plain English the various steps in calculating the SCC, the weaknesses and strengths of those calculations, and how they are used to inform climate policy. The aim is to help policymakers, regulators, civil society, and others judge for themselves the reliability of using the resulting numbers in making policy decisions. Framed as a series of questions and answers, it also allows these stakeholders to understand the current debate within the economics community as to whether climate policy is a special case for which standard cost-benefit and SCC tools of the trade are not adequate to assess policy options.