What Does Water Have to Do with National Security?

When thinking of national security issues, rivers, lakes and glaciers are not usually what come to mind. But water stress is, in fact, an often-overlooked and increasing threat to national security for many countries.

Water security is an important issue driving state stability and safety in many regions of the world. The direct and indirect effects of water stress—such as migration, food shortages and general destabilization—transcend national boundaries. As water stress increases in the coming years, prioritization of water resources in domestic and global security policies will become even more essential.

A given location experiences “water stress” when its water demand is high relative to its water supply. Water demand is growing in many places, driven by population and economic growth. At the same time, climate change is beginning to deprive mid-latitude areas of their usual rainfall, which reduces water supply and exacerbates stress. In a new paper, the Council on Foreign Relations (CFR) used WRI’s Aqueduct global water risk tool to show water stress levels in 2030, under one plausible global scenario. This scenario shows that many regions in the world—such as the Middle East and the western United States—will experience increased water stress in 2030. 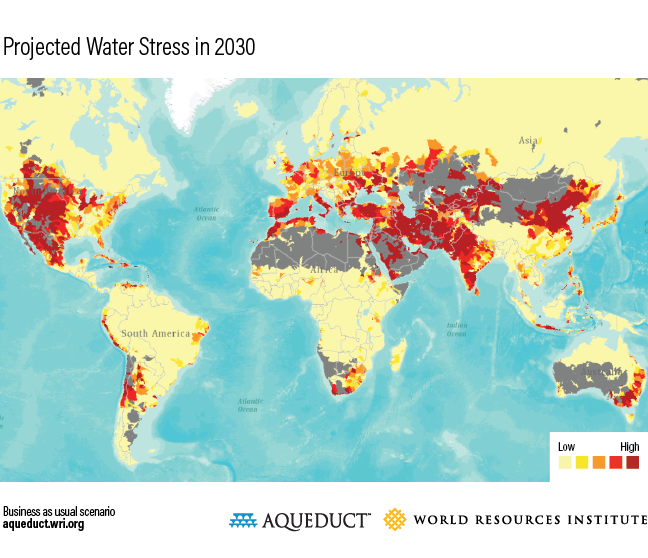 Water stress increases the likelihood of disputes over water, as people and countries compete for scarce resources. In CFR’s “Water and U.S. National Security,” author Joshua Busby argues that this risk is maximized when water stress and weak governance intersect. Water stress has played a key role in a number of recent conflicts, including the war in Darfur and fighting in the Lake Chad Basin, where the Boko Haram insurgency has taken place. In these instances, diminishing water supply has been a contributing factor to conflict, as groups fought for access to this increasingly precious resource. 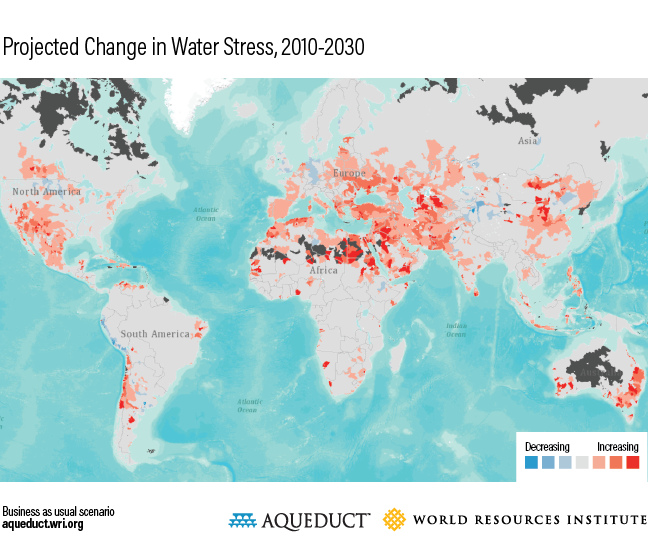 A Troubling Case Study from the Middle East

Water has been a hidden player in the current conflict in Syria. From 2006 through 2011, Syria experienced its worst drought in recorded history. NASA satellite data from that time period showed that water in the Tigris and Euphrates river basins decreased at an alarming rate, as demand for freshwater continued to rise. This drought, combined with water mismanagement, resulted in crop failures and food insecurity, which were some of the many catalysts for the civil war.

Water has also been used as a weapon during the war itself. During fighting between the government and rebel forces in December 2016, water supply was cut off to the city of Damascus. Each side blamed the other for the disruption, which left  more than 5.5 million people with only minimal access to water. This led the UN to declare that depriving Damascus of water constituted a war crime if done intentionally.

What Do We Do?

With water stress projected to rise in so many of the world’s highly populated and strategically important areas, countries should include studying and mitigating water risks in their national security strategies. The United States, for example, began to do so by evaluating the implications of global water stress for national security. In 2012, at the direction of the Secretary of State, the National Intelligence Council (NIC) prepared a report on global water security. The NIC concluded that over the next 10 years, freshwater availability worldwide would not be able to keep up with demand, hindering food production, economic growth and security. The council predicted that water will increasingly be used as leverage between nations and even as a “weapon to further terrorist objectives.”

Busby writes that, “the failure to invest in water and security now could mean that the United States and other international actors will pay billions later to respond to crises, whether they be humanitarian emergencies, disease outbreaks, or conflicts within or between states.” We know how to identify water-related risks to national security, and we are beginning to identify best practices for reducing them. Will governments muster the political will to tackle the issue?