This article is the first in a series on WRI’s latest report, Thirsting for Justice: Transparency and Poor People’s Struggle for Clean Water in Indonesia, Mongolia, and Thailand. This post focuses on a Thai community’s fight for information on industrial water pollution.

Complaints about pollution in Map Ta Phut, Thailand, a sprawling industrial estate south of Bangkok, are not new. For decades, residents have voiced concerns about the pollution pouring from more than 140 petrochemical plants, oil refineries and coal-fired power stations. Researchers from nearby organizations and international universities have confirmed local communities’ fears, discovering dangerously high levels of mercury and arsenic in their water. Many have ranked Map Ta Phut as Thailand’s number one toxic hot spot.

Exposure to these pollutants can cause serious health effects. A 2003 Thailand National Cancer Institute study found unusually high rates of cervical, blood and other cancers in Rayong Province, where Map Ta Phut is located. Provincial public health officials have also reported increased numbers of birth deformities, disabilities and chromosome abnormalities, while environmental activists have claimed that pollution from the estate caused at least 2,000 cancer-related deaths from 1996 to 2009.

Yet the Thai government has not responded to communities’ concerns about health risks or made any significant attempt to clean up the region’s water.

Nangsao Witlawan, a former oil refinery worker and Map Ta Phut resident, has stage four cervical cancer and has unanswered questions about her water. But after meeting with officials and company representatives, she still doesn’t know if the water is safe to use or contaminated.

“All the government services — municipalities, public health, the Office of Natural Resources and Environmental Policy and Planning, and the Industrial Estate Authority of Thailand — realized what has been happening with pollution in our community, but they don’t tell or give us the true information,” Witlawan says. “I’ve never received correct and clear information about the water.”

Witlawan’s story, although commonplace across Asia, is surprising in Thailand. On paper, the country has one of the world’s most advanced legal environmental disclosure regimes. Its constitution protects citizens’ right to receive information from the government before the approval or implementation of activities that might have serious environmental, health or quality-of-life impacts on their communities. Nearly ten years ago, it passed strong rules under its Freedom of Information (FOI) law that require officials to proactively disclose environmental and health information to the public. In theory, such legislation should enable Witlawan and all Map Ta Phut residents to access water pollution information. But as a new WRI report finds, implementation of these laws is ineffective, in Thailand and throughout Asia.

The report, Thirsting for Justice: Transparency and Poor People’s Struggle for Clean Water in Indonesia, Mongolia, and Thailand, analyzes vulnerable communities’ access to water pollution information in these three countries. It finds that, like many nations in the region, they have made real progress in protecting citizens’ right to environmental information and enacting laws to ensure governments release water pollution data to local communities. However, as WRI’s study illustrates, weak implementation and limited investments in information disclosure systems are undermining strong “right to know” laws in Thailand, Indonesia and Mongolia. These governments are failing to answer questions about water pollution―information they are legally required to provide.

The Thai, Mongolian and Indonesian governments have made notable progress in establishing “right to know” laws specifying the proactive disclosure of water pollution information. In Thailand, for instance, officials must release companies’ permitting documents, information on the amount of pollutants released, and explanations of public health impacts. Indonesian and Mongolian legislation also mandate that the government provide water quality data, updates on cleanup efforts and information on livelihood impacts. But new research shows that, with few exceptions, these governments are not effectively disclosing the required data, and public access to crucial water pollution information is limited. 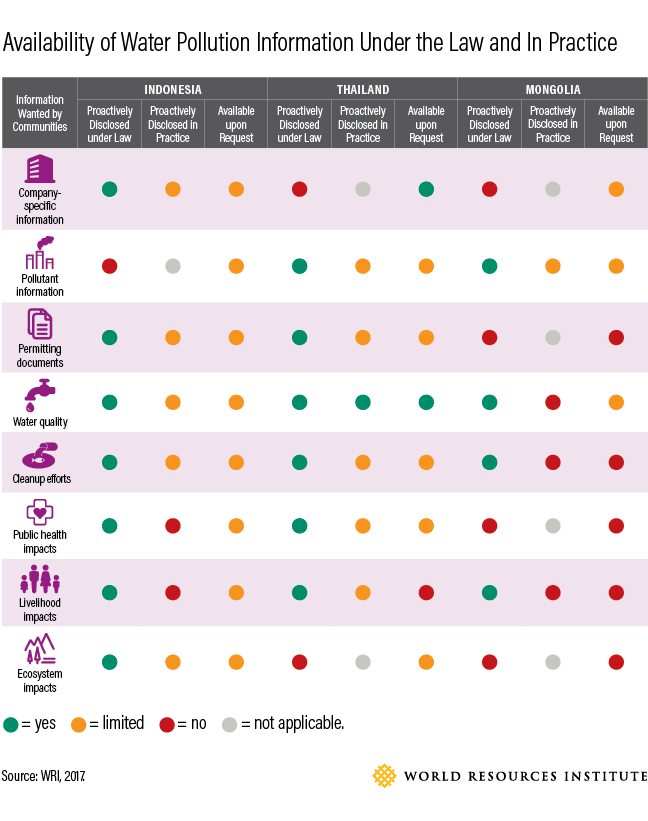 The Ramifications of Poor Implementation

In Map Ta Phut, such poor transparency is undermining public trust in the government. A neighbor of Witlawan’s, Kanis Phonnawin, worries that officials manipulate water pollution data to benefit the estate’s industries.

“Government agencies paid very little attention to the water problems,” Phonnawin says. “Also, information about each issue released by a government agency always lacks reliability, because most of the information is biased for the sake of petrochemical factories.”

Without the trust of its citizens, a government’s capacity to implement policies, build public support for necessary reforms and enforce the law suffers. A radical shift in information sharing is needed to improve access to water pollution information, restore Phonnawin’s faith in her government, and enable Witlawan to hold companies that do not comply with environmental regulations to account. Improving transparency―not only in Thailand, but across Asia and the developing world―is a critical step forward in the water justice movement.

A Community Action Toolkit: A Roadmap for Using Environmental Rights to Fight Pollution