WRI’s fact sheet series, How States Can Meet Their Clean Power Plan Targets, examines the ways states can meet or even exceed their standards under the CPP while minimizing compliance costs, ensuring reliability and harnessing economic opportunities. This post explores these opportunities in Pennsylvania.

Under the Clean Power Plan, Pennsylvania must reduce its power sector emissions by 24-25 percent below 2012 levels by 2030. New analysis shows that the state’s existing clean energy policies and opportunities to make better use of existing power plants can reduce power plant carbon dioxide emissions 13 percent below 2012 levels by 2030, getting it more than halfway to its mass-based emission target. Expanding clean energy policies after the current targets are met in the early 2020’s can get Pennsylvania the rest of the way there.

Pennsylvania’s power plants have already reduced their carbon dioxide emissions by 12 percent between 2005 and 2012, mostly by using more natural gas and less coal to generate electricity. Pennsylvania exports a lot of electricity to neighboring states, and the state’s generation is expected to increase slightly (5 percent) between 2012 and 2030. As a result, emissions are projected to increase by 8 percent over this same time period. 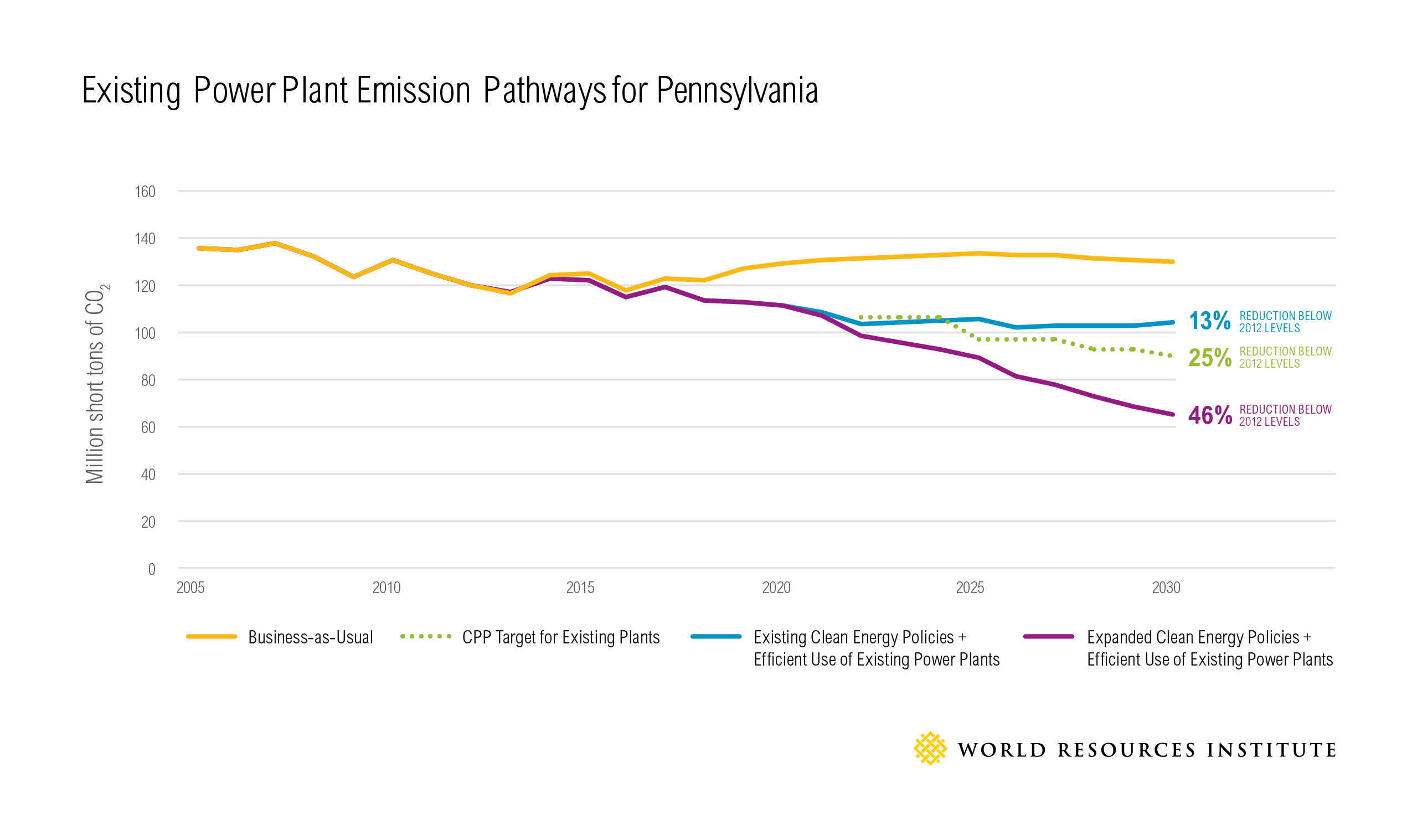 The good news is that Pennsylvania can take three steps to decrease its emissions to meet or exceed its CPP targets:

1. Follow through on its existing clean energy policies. Pennsylvania’s latest phase of its energy efficiency program (Act 129) will achieve about 3.5 percent cumulative annual savings in 2020 (i.e. the amount of electricity saved in a given year due to measures implemented in that year and prior years) compared to the 2009/10 baseline. Pennsylvania’s alternative energy portfolio standard (AEPS) requires 8 percent of electricity sold in the state to be generated by Tier I renewable sources (like wind, solar photovoltaics, landfill gas, wood or black liquor) by 2021. An additional 10 percent of electricity sold in the state must be generated using Tier II sources by 2021, and can include energy sources like municipal solid waste, distributed generation, integrated combined coal gasification technology, and other alternative sources.

3. Expand its clean energy policies once the targets are met in 2020-21. Pennsylvania could meet or exceed its mass-based emission targets by adjusting or removing the spending cap on efficiency programs while increasing the target to achieve about 13.2 percent cumulative annual savings by 2030 (a level that Pennsylvania’s Public Utility Commission found to be cost-effective) and increasing the Tier I alternative energy standard to 18 percent of the state’s sales by 2030. Doing so would cut carbon dioxide emissions by 46 percent below 2012 levels by 2030.

These reductions are also cost-effective:

Pennsylvania’s clean energy policies are already cutting emissions and other harmful air pollution while saving money. However, to meet its CPP targets, the state needs to make better use of existing power plants and expand Act 129 and AEPS past their current 2020-21 targets. That would allow the state to scale up benefits, reduce the need to invest in new natural gas plants and achieve deeper emissions reductions more cost-effectively. It would also enable the state to meet its mass-based target for new and existing plants. In fact, adopting EPA’s new source complement target would give further incentive for zero-carbon generation sources and ensure that future emissions from the state’s power sector do not continue to increase.

• LEARN MORE: Kristin Meek will testify this evening at the Pennsylvania Department of Environmental Protection (DEP) listening session on the U.S. Clean Power Plan. The Pennsylvania DEP held fourteen of these listening sessions across the state in order to gather input from the public to help inform the state’s review and implementation of EPA's final rules for existing power plants.