New analysis published in Nature Climate Change shows that Indonesia is losing primary forest at a staggering rate. The country now has the highest rate of loss in tropical primary forests in the world, overtaking Brazil. Primary tropical forests are the most carbon- and biodiversity-rich type of forest ecosystem.

Led by Belinda Margono (also co-author of this blog), researchers from the University of Maryland and WRI published the analysis, the first-ever that maps and quantifies annual loss of primary forests in Indonesia. It builds on the groundbreaking global analysis led by Professor Matthew Hansen in partnership with Google published in Science last year. The study reveals that from 2000 to 2012, Indonesia lost more than 6 million hectares of primary forest – an area half the size of England. In recent years, Indonesia even surpassed Brazil in deforestation, losing almost twice as much primary forest as Brazil in 2012. Perhaps most worryingly, the new data shows that the problem is getting worse: Indonesia’s primary forest loss is increasing by an average of 47,600 hectares every year, with an increasing proportion of loss occurring in wetlands, which often results in massive greenhouse gas emissions from peat soils. 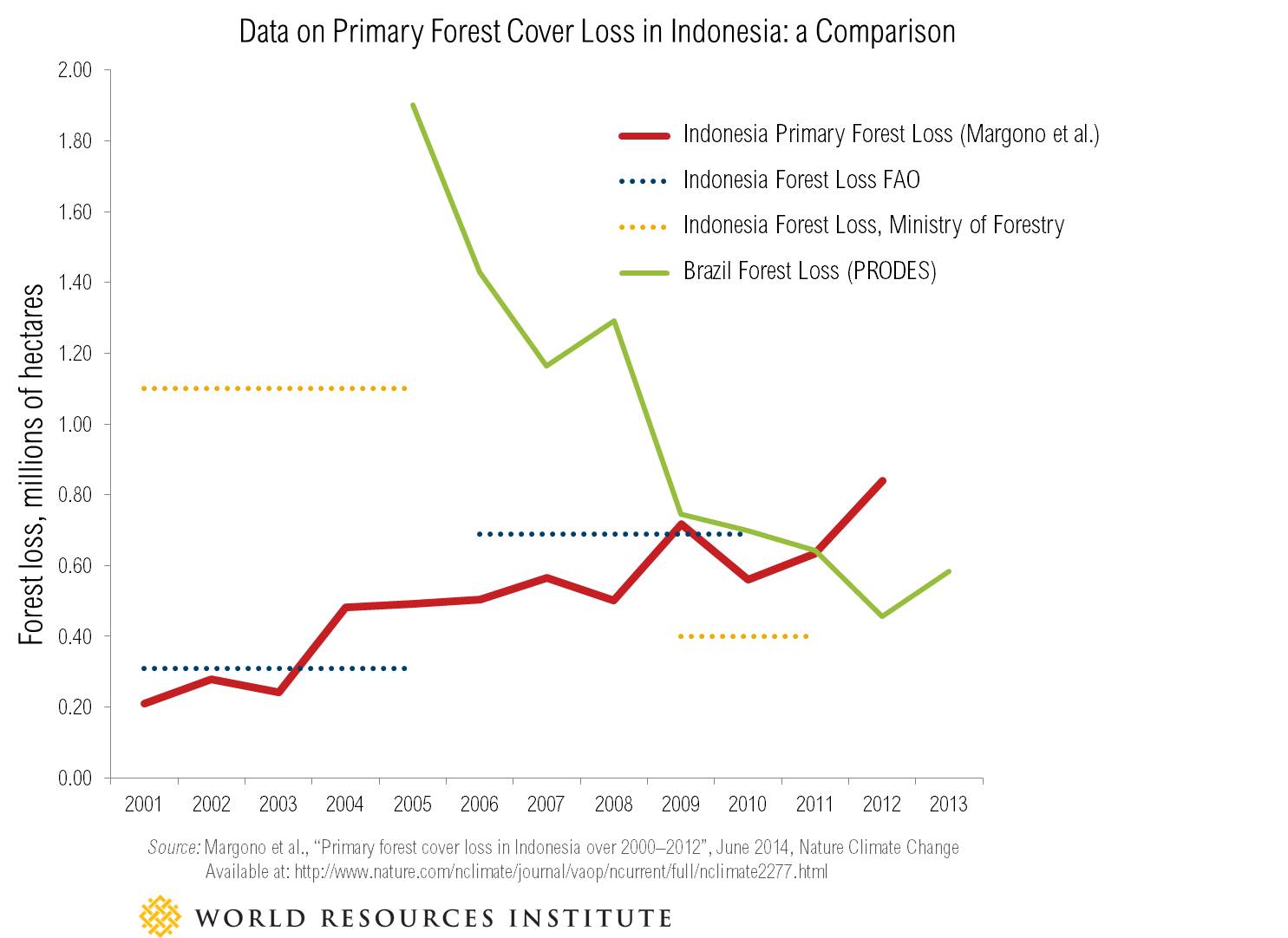 Where Is Forest Loss in Indonesia Happening?

According to the new study, 38 percent of all tree cover loss in Indonesia during the study period occurred in primary forests, the most pristine and biodiverse of all the country’s forest land. Notably, 40 percent of this loss (within official forest areas) happened within zones that restrict forest clearing, such as national parks, protected forests, and even areas protected under Indonesia’s forest moratorium.

Less surprisingly, 51 percent of the primary forest loss occurred in relatively flat, accessible areas (or “lowlands”), while higher areas remain relatively intact. Further, 43 percent of primary forest loss occurred in wetlands, a sign that lowlands forests are exhausted and the agricultural frontier is shifting into ecologically sensitive, carbon-rich ecosystems. Most of this change occurred in the islands of Sumatra and Kalimantan, with the former (already a longtime destination for expanding large- and small-scale agriculture) seeing more primary forest loss happening in wetlands, often by draining or burning carbon-rich peat and contributing significantly to climate change.

Indonesia is one of the world’s biggest greenhouse gas emitters, in large part to its deforestation and clearing of peat for agribusiness. More loss of primary forests releases disproportionately higher greenhouse gas emissions while also damaging livelihoods of the people who rely on forests.

This trend also shows that despite Indonesia’s forest management commitments—such as its forest moratorium and a national pledge to reduce carbon emissions from land use—there is much work to be done.

The new study shows that Indonesia needs to do much more to translate its forest and climate goals into real change on the ground. Specifically, the country could:

Indonesia can also learn from other leaders in forest conservation. A few years ago, Brazil had the highest deforestation rates of any tropical country. However, a recent study showed that with satellite and other monitoring systems, law enforcement, and financial incentives, Brazil has decreased deforestation by 70 percent in recent years. With good policies and consistently updated, high-quality data, Indonesia can and needs to pursue a similar path.