The U.S. power grid is sometimes referred to as "the biggest machine on Earth," reminding us of the scale and complexity of transitioning to clean energy. What is sometimes forgotten is that the industry, laws and regulations operating this grid are just as complex as the physical infrastructure, and key to how electricity is generated and used.

In one-third of the country, electricity is produced and sold by traditional, vertically-integrated utilities that control generation, transmission, distribution and final retail sales.

Importantly, these wholesale markets were not designed to promote low-carbon resources or support emerging technologies, and that can limit clean energy progress in the United States.

Organized wholesale markets for electricity were implemented in certain states beginning in the 1990s with the goal of increasing competition and efficiency in generation. With oversight by the Federal Energy Regulatory Commission (FERC), these states created Regional Transmission Organizations (RTOs) and Independent System Operators (ISOs) — that design and operate these markets. (It's common to just refer to all of the markets as RTOs.) Texas is the exception, as a state RTO operating outside of FERC's jurisdiction. 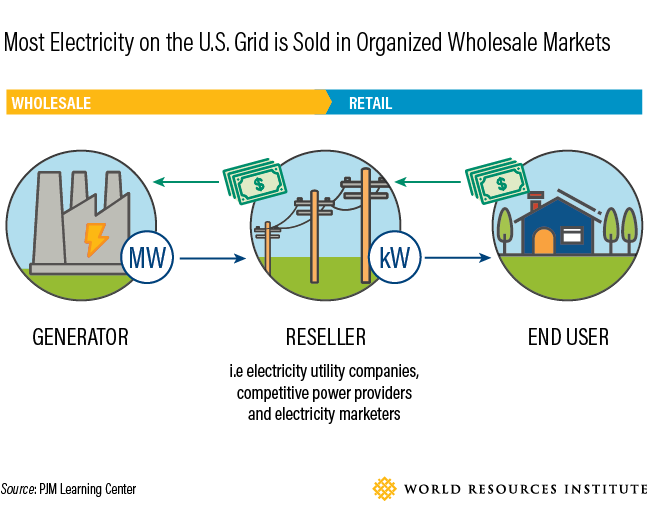 How Do Electricity Markets Work?

RTOs allow multiple generators and customers to sell electricity into and purchase power through wholesale markets. For some large customers (such as corporations), the markets also provide a platform over which they can buy energy through bilateral contracts, a common means for companies to purchase renewable electricity. All RTOs operate an energy market in which the product is megawatt-hours (MWh) sold in a specified time period. The energy market is very short-term in nature, scheduling production and transactions just one day ahead, and operating a spot market to ensure that supply and demand (load) are balanced in real time around the clock.

Some RTOs operate a capacity market in which the product is megawatts of generating capacity committed for a month, season or year. Capacity markets ensure adequate reserves to meet load and reliability requirements. In addition, all RTOs operate markets for ancillary services necessary to maintain reliability. Two key services are: 1) "frequency regulation" that compensates generators and users that can adjust their output or consumption over very short periods of time (as little as seconds) to maintain system frequency at 60 hertz; and 2) "operating reserves" — generating units and demand response agreements that bring generation and load back into balance instantly or within 30 minutes in the event of a major imbalance (for example, the unexpected loss of a large generator).

RTOs facilitate trades across wide geographic areas and typically dispatch resources every five minutes, both important for integrating renewable resources with variable output, such as solar and wind. RTOs create transparency by publicly reporting market prices, which are important for regulators. They also manage processes designed to optimize generation and transmission development, such as dispatching power in a way that accounts for the costs of transmission constraints. 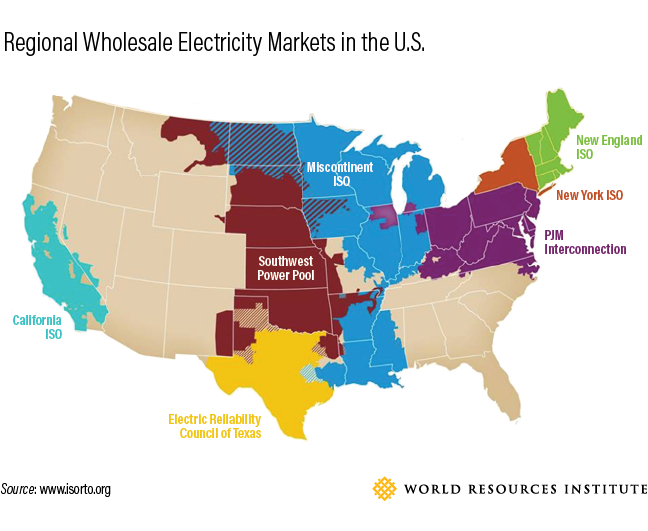 What Challenges Do Wholesale Markets Present for the Clean Energy Transition?

Although electricity markets were developed to maintain efficiency and reliability, they were designed around traditional sources of electricity: fossil fuels. The current design can be traced to the 1980s, before the emergence of low-cost wind and solar power. The predominant electricity sources were fossil fuels, along with nuclear and hydropower. Except for hydropower, all traditional sources had significant operating costs in the form of fuel. At any given time, a utility would dispatch its power plants to meet electricity demand in merit order — from lowest operating cost to highest operating cost, also accounting for "must run" facilities. This order would traditionally be hydropower first, then nuclear, followed by coal, oil and gas.

In designing electricity markets, economists assumed that each plant formed part of an implicit supply curve and that, for any given time period, the market would result in an efficient price when the supply curve intersected with the demand curve. Transactions in the market would result in the dispatch of the group of plants with the lowest operating costs to meet the load.

Economists also assumed that the resulting wholesale price would be sufficient to cover the costs of generating electricity from various power plants. There are two types of cost for power plants: 1) fixed costs associated with construction of a power plant, and 2) operating costs that are associated with maintenance and purchasing fuel. Contracts from power plants to utilities and other buyers were structured to cover both types of costs. When there was more electricity demand than available generating capacity, it was assumed that prices would spike and plants that were more expensive to own and operate would bid into and be selected by the market.

In the last 10 years, two developments have redrawn the merit order curve: low bids from more and more renewable and natural gas resources. Hydropower, wind and solar have negligible operating costs because they do not purchase fuel. In a merit order curve with little wind and solar, the market clears at a relatively high price, reflecting the price of fuel for fossil fuel plants. In a merit order curve with a large amount of wind and solar, the market clears at a relatively low price. This effect is accentuated during the day when solar output is highest. Wind and solar plants typically have long-term bilateral contracts that enable financing, construction and recovery of their fixed capital costs so that they can offer lower prices in the market. The surge in inexpensive natural gas production in the U.S. also disrupts the historic merit order pattern. Cheap natural gas reduces the operating costs of these plants to levels below nuclear and coal plants — often underbidding them in the market. 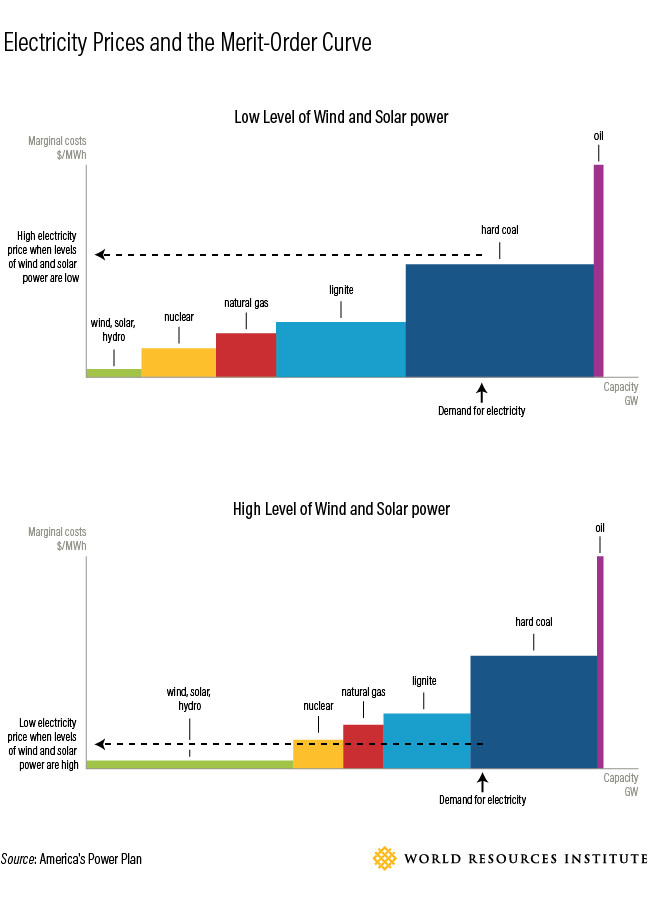 These two developments are major factors in the decline of coal generation over the past decade, and the resulting decline in CO2 emissions from the power sector. Coal is simply too high on the merit order curve in many places. In fact, wind and solar are so abundant at certain times that they drive the market-clearing price to zero. (Sometimes prices can even turn negative—for example, when wind sellers account for the production tax credit in their bids.)

The redrawn merit order curve also results in some nuclear plants losing to wind, solar and natural gas plants in the energy markets — one of several factors leading to early nuclear plant retirements. To the extent that this leads to natural gas generation substituting for nuclear, CO2 emissions from the power sector will increase — perhaps up to 6%. Some states have taken steps to avoid early retirement of zero-carbon nuclear plants as part of state plans to reduce emissions.

Given the surge in low-cost renewables and natural gas, and the role of clean energy in addressing the climate challenge, current market designs present several challenges for continued growth in clean generation: 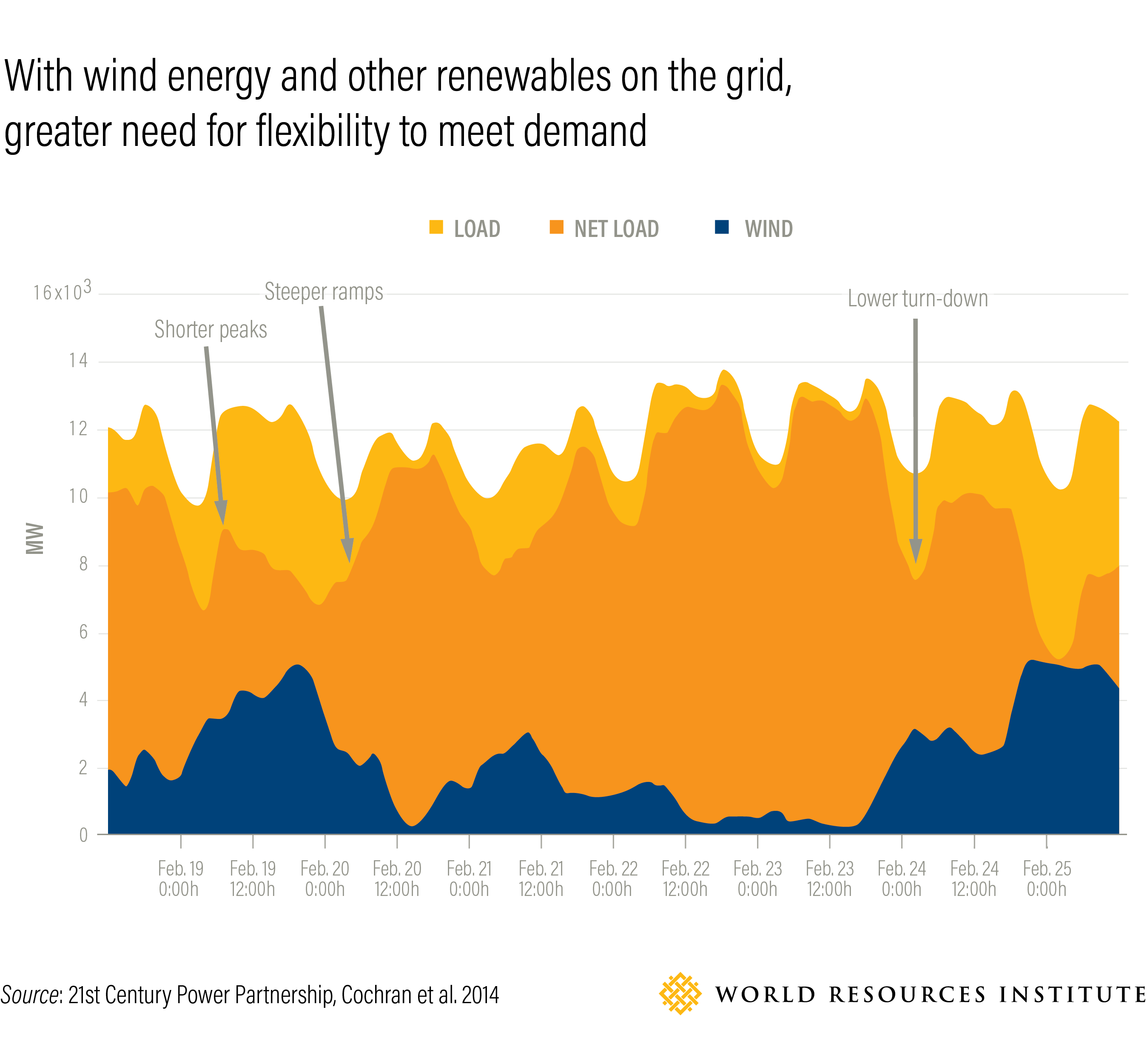 Changes to organized wholesale markets will come in a variety of ways — through incremental changes to market rules, changes to operational practices that accommodate new technologies, or broader changes to how markets are designed.

Incremental changes to market rules and operational practices are key to improving renewables integration and system planning. For example, FERC issued Order 841 in 2018, requiring each RTO to develop new rules that allow storage assets like batteries to participate in wholesale markets. With updated rules to include storage in the markets, these new technologies can provide flexible energy, capacity or ancillary services to support renewable resources and better integrate them into markets. Markets have already begun to adjust their forecasting procedures and tools to better understand the availability of wind and solar resources. Using different models and assumptions to generate forecasts that better account for uncertainty have improved the ability of markets to incorporate variable wind resources.

While incremental changes are critical, they may not solve all the issues facing markets — especially as more renewable energy enters the grid and the electricity industry more steeply reduces CO2 emissions. There has been no expert consensus to date on the future of wholesale market design, but experts broadly agree that change is needed to better incentivize investment that will optimize the resources on the grid. Markets could evolve to value services differently and provide new revenue streams to generators. Other potential changes could address resource bidding practices, resource planning by states or utilities alongside markets, and approaches that enable compensation of generators, such as auctions outside of markets.

As markets evolve, another important consideration will be the effectiveness of RTO governance, including stakeholder processes which allow large customers, generators, states, cities and other energy producers and users to advise or direct the RTO on specific rule issues. Recognizing wholesale markets as a critical link in the U.S. electricity system, WRI and other stakeholders continue to examine how these markets can align with the clean energy goals of the country, states, cities and consumers.

How Some U.S. Cities Are Working to Align Energy Markets with Their Clean Energy Goals

How Distributed Energy Resources Can Lower Power Bills, Raise Revenue in US Communities

Beyond Renewables: How to Reduce Energy-Related Emissions by Measuring What Matters