How the US Can Produce Cleaner Energy While Capturing Economic Benefits

The power sector is the largest source of U.S. greenhouse gas emissions, making up 32 percent of the total. And while the grid is starting to decarbonize—carbon dioxide emissions from the sector dropped 15 percent between 2005 and 2013—the country still has much further to go to limit sea level rise, drought, and other effects of climate change.

The good news is that we’re already seeing examples across the country where switching to cleaner power sources like natural gas and renewables can save money, curb climate change, and improve public health.

Natural Gas Is Cheaper than Coal

Increased supply and lower prices for natural gas are already reducing coal generation and greenhouse gas emissions. Coal accounts for only 5 percent of the new capacity built since 2000, whereas natural gas makes up 74 percent.

This trend is likely to continue. New natural gas plants are 19 to 44 percent cheaper to build than new coal plants. Plus, upcoming environmental regulations to protect public health could lead to a wave of coal plant retirements in the coming years, which could spur increases in cleaner power systems like natural gas, renewables, and energy efficiency. 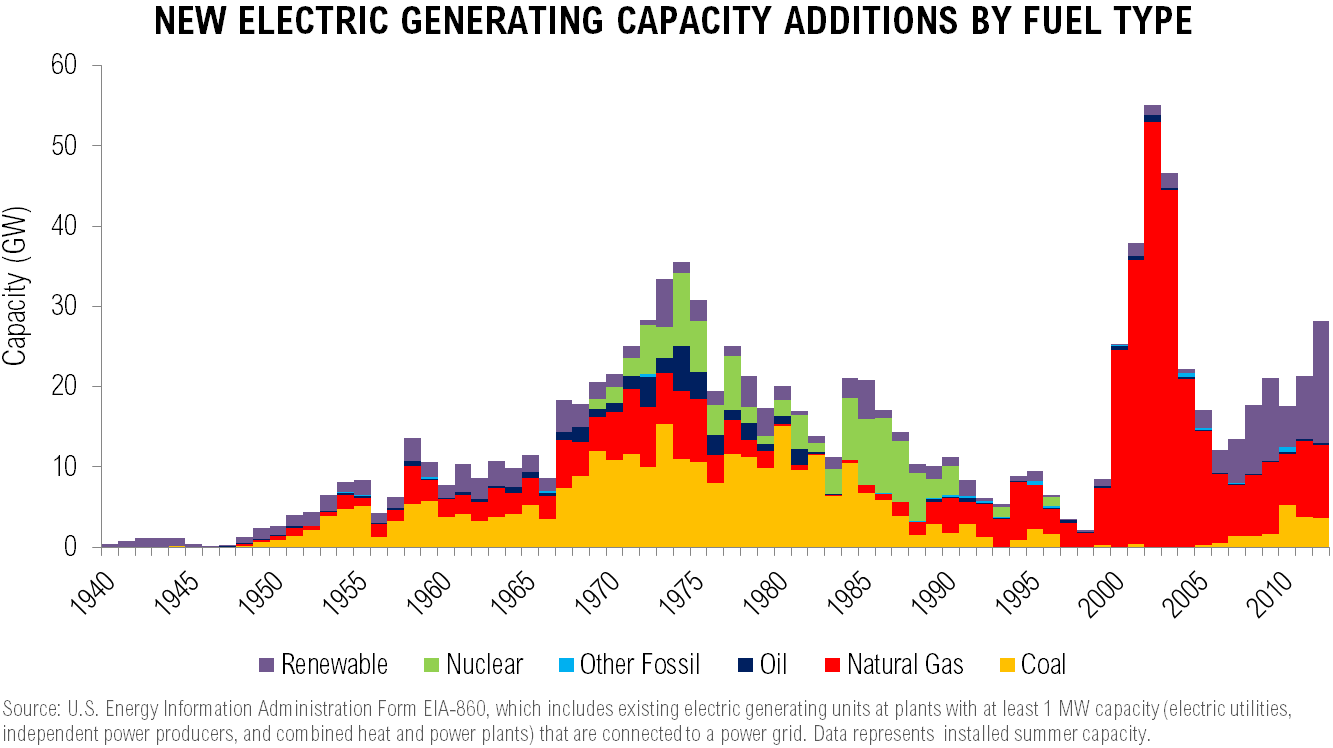 While natural gas burns cleaner than coal, it still emits both methane and carbon dioxide, leading many to question its long-term role in a low-carbon power system. So it’s encouraging that new wind energy is cheaper than new coal generation—and sometimes even natural gas—in most markets. New solar photovoltaic projects are also being chosen over new coal and gas generation in a few areas of the country because of lower costs or larger net benefits. Research shows that increased renewable energy generation has the potential to save American ratepayers in some regions tens of billions of dollars a year over the current mix of electric power options.

Here are a few examples where customers are already seeing these savings:

While federal tax incentives and state policies like renewable portfolio standards helped scale up renewable energy, technology improvements moved the sector forward as well. For example, prices for solar PV panels have dropped 80 percent since 2008, and analysts expect this drop to continue in the years ahead. As for wind, new turbine designs will open up new areas of the country to development, especially in the Southeast.

Getting Over the Hump

In some cases, market forces alone are pushing businesses, governments, and consumers toward low-carbon options. But this transition can—and indeed, must—accelerate in order to reduce emissions and reap associated environmental, health, and economic benefits.

That’s where good policy comes in. The power industry needs long-term regulatory certainty in order to invest in cleaner forms of energy. Legislative measures—such as a clean energy standard, a greenhouse gas tax, or a greenhouse gas cap-and trade program—can help. Other approaches can achieve similar results, such as through greenhouse gas emissions standards for new and existing power plants, which EPA has already proposed. Additional important policy signals include:

Tune in for our next installment of Lower Emissions, Brighter Economy, where we’ll explore the economic benefits of reducing electricity demand. Or, download our full publication, Seeing Is Believing: Creating a New Climate Economy in the United States.