WRI just released a new report that answers the important question: Is the United States on track to meet its climate change commitments?

The report, Can the U.S. Get there from Here? Using Existing Federal Laws and State Action to Reduce Greenhouse Gas Emissions, looks at whether the U.S. Administration--without congressional action--can meet its goal of reducing greenhouse gas (GHG) emissions 17 percent below 2005 levels by 2020. (This is a goal the United States committed to in 2009.)

According to our research, the United States is not yet on track to meet the 17 percent target. However, the country can get there using existing federal laws, provided that the Administration takes ambitious action. We also found that states can play a significant role in reducing GHG emissions and can help supplement federal action.

This report is a legal and technical analysis that explores three levels of ambition for the Administration: “lackluster,” “middle of the road,” and “go-getter.” These scenarios are based on an extensive review of the technical literature on what is possible. The interactive graphic below highlights what can be accomplished through federal action under these scenarios.

Copy the embed code to use this infographic on your own site.

First, let’s look at energy-related emissions: The recent decline in energy emissions has been well reported lately. It’s mostly due to low natural gas prices, reduced gasoline consumption, and slowed economic growth, among other factors. Official projections suggest, however, that these trends are not expected to continue. Our research shows that in the absence of new policies, these emissions will remain roughly at current levels through 2020 and then will increase slightly through 2035. 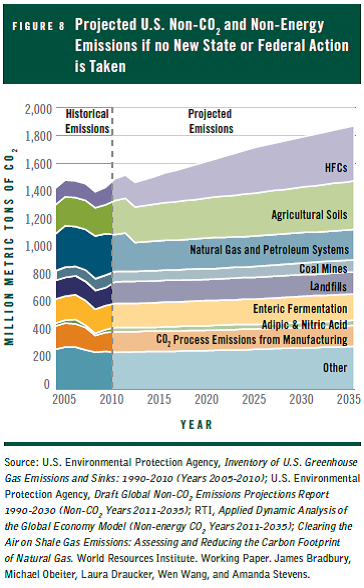 We Have the Tools to Get On Track

The Administration has the tools to get on track. Our analysis identifies four opportunities that provide the greatest potential for reducing emissions in the near-term:

Response: The U.S. Environmental Protection Agency (EPA) can drive GHG emissions down by establishing emissions standards for existing power plants, along with finalizing proposed standards for new power plants. States can also move ahead with measures to reduce emissions from the power sector, such as by increasing the use of renewable power and cogeneration and reducing electricity demand.

Response: EPA’s recent air pollution standards]() will help reduce these emissions, but more can be done. A number of technologies and work practices can reduce emissions and would pay for themselves in three years or fewer. EPA and the states can help drive adoption of these technologies and practices by adopting standards that address methane as a greenhouse gas pollutant.

3) Hydrofluorocarbons (HFCs): These gases—primarily used for refrigeration and air conditioning—represent one of the most rapidly growing sources of greenhouse gas emissions in the United States.

Response: The Administration has been working to craft an international consensus to reduce these emissions through amendments to the Montreal Protocol. Those amendments have gained widespread acceptance from chemical and consumer product manufacturers, and negotiations should continue. In the meantime, however, emissions continue to rise. EPA can help address this situation now by limiting HFC consumption in the United States under the Clean Air Act. They can do so using the Significant New Alternatives Policy (SNAP) Program, which would allow them to prohibit the use of chemicals for which good alternatives already exist.

Response: New appliance and equipment efficiency standards can play a key role in reducing emissions. Between 2009 and 2011, the Department of Energy finalized 17 new product standards, but more can be done. In a recent study, the American Council for an Energy-Efficient Economy and the Appliance Standards Awareness Project identified 34 new standards that combined would save consumers $26 billion annually in 2025.

Looking Ahead to 2050 and Beyond

Ultimately, to avoid the worst impacts of climate change, the United States will need to reduce its emissions more than 80 percent below 2005 levels by 2050. This level of reductions will likely require congressional legislation.

But in the meantime, there is much that the Administration can do now to reduce emissions and set the United States on a lower carbon trajectory. The U.S. has the tools to get started and to meet its 2020 target. We’ll be watching to see what they do next.

GET THE INFOGRAPHIC:Copy the embed code to insert this infographic on your own site.