The Heritage Foundation has gained prominence as a go-to source of information for the Trump Administration. But when it comes to estimating the costs and benefits of certain climate actions, Heritage presents a highly misleading picture. Both President Trump and members of Congress have referenced a Heritage study that claims the costs of complying with the Paris climate agreement are too high and the benefits are too low. A WRI review of the document finds that Heritage does not provide credible estimates of either costs or benefits of climate action.

In what follows, we break down some of the key problems with the Heritage Foundation paper.

The Heritage paper claims that meeting the Paris Agreement’s target to cut greenhouse gas emissions in the United States would “significantly harm the U.S. economy.” But this claim is grounded in assumptions that skew the Heritage results toward negative economic consequences of climate actions, and it differs from the conclusions of independent organizations.

A detailed review by WRI of four studies of the economic impacts of a major climate regulation showed that the results of policy evaluations can be strongly influenced by the subjective assumptions made by study authors. For example, the one study that found highly negative economic consequences was funded by an advocacy group for coal producers and used assumptions that biased its results toward higher costs. Similarly, the Heritage study uses data sources that bias its results toward higher cost estimates.

For the costs of clean energy, the Heritage study relies on the Energy Information Administration (EIA) AEO 2015 report, a source known for its overly conservative clean energy forecasts. WRI’s recent review compiled expert forecasts of the future costs of wind and solar energy. As shown below, AEO 2015 forecasts show a higher future cost for solar and wind energy than all other comparable expert forecasts that we could find. Such pessimism about the future cost of clean energy led Heritage to find higher costs of shifting from fossil fuels to clean energy. In more recent AEO reports, EIA has reduced its solar and wind forecasts by 31 and 15 percent, respectively (see Table 8.2 in the AEO Assumptions reports, for 2015 and 2017), implying that no current expert forecast would support Heritage’s assumptions. 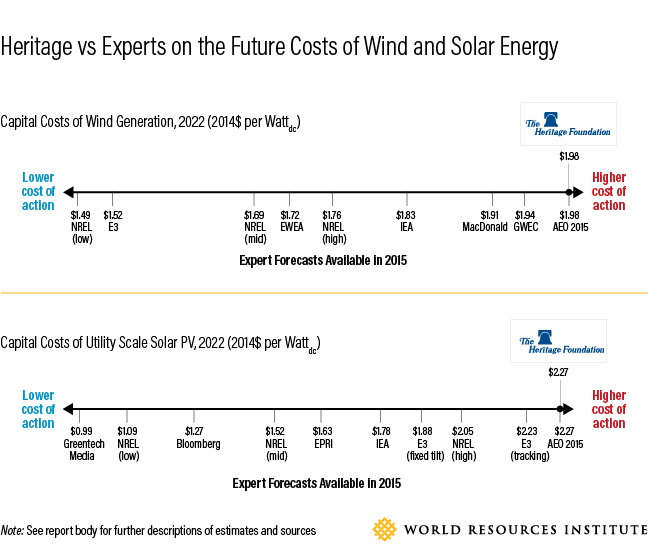 The Heritage study presents its cost results in a misleading and sensationalized way. Heritage adds together its annual estimates of U.S. GDP impacts over a 20-year period to get $2.5 trillion, which sounds like a large number, but it represents just a tiny sliver – far less than 1 percent—of aggregate U.S. GDP of over $430 trillion over that period. In addition, while Heritage claims its results are indicative of the overall consequences to the U.S. economy and household finances, in fact, the Heritage model ignores many of the positive effects on the economy of climate action, such as increased competitiveness in a rapidly expanding global clean energy industry and greater productivity from a healthier workforce due to reduced air pollution (see Box 1 of the WRI review).

The conclusions that Heritage draws from its analysis differ markedly from the conclusions of comparable studies conducted by academics and independent organizations. Heritage uses a carbon tax as a proxy for the U.S. policies that would be used to achieve the United States emissions goals. There is a vast literature on the economic effects of carbon taxes. For example, economists at the non-partisan Resources for the Future have published numerous studies of the effects of similar carbon taxes on economic outcomes and concluded that a carbon tax would have no substantive impact on economic growth and would have little effect on employment. Similarly, the Congressional Budget Office, which provides Congress with nonpartisan analyses for economic and budget decisions, found that a carbon pricing policy would have a small effect on overall employment over the next few decades. In fact, a group of prominent Republicans recently proposed a carbon tax as one part of its “pro-growth” plan to limit climate change.

Misleading Estimates of the Benefits of the Paris Agreement

Under a do-nothing strategy, economic damages from climate change may be in the range of 1 to 5 percent of global GDP by 2100, incurred every year, and the consequences could be far worse. The benefits of the Paris Agreement hinge on how much these economic risks can be reduced by cutting carbon dioxide emissions globally over the next century.

The benefits of U.S. action are difficult to estimate with pinpoint precision, but it’s easy to conduct an analysis that asks the right questions. Specifically: if the U.S. acts on climate, to what extent will the world act as well, and how will that global action reduce the risks of climate change? Critically, the Heritage study fails to ask or answer that question. It concludes that the benefits of climate action are negligible using misleading arguments based on the consequences of U.S. actions alone or global action over a short time period.

Heritage ignores the benefits of countries acting alongside the United States.

First, Heritage says that “if all carbon dioxide emissions in the United States were effectively eliminated, there would be less than two-tenths of a degree Celsius reduction in global temperatures.” Global temperatures are determined by numerous factors, including the greenhouse gas emissions among all countries. The Paris Agreement is built on 195 countries collectively aiming to decarbonize the global economy. This claim by Heritage ignores 194 of these countries. No one has suggested that the United States acting alone (or industrialized nations alone, which Heritage also mentions) would shift the direction of global temperatures, but the U.S. commitment was integral to securing the pledges from the rest of the world in Paris.

Second, Heritage argues that benefits are negligible because “the various country-specific emissions targets for all the countries in the Paris agreement do not offer much hope for climate impact,” reminiscent of the man who needs to diet but declares each piece of cake as irrelevant to his long-term health. While the national targets in the Paris Agreement extend only though 2025 or 2030, countries also agreed that much deeper emissions cuts are needed after 2030 to achieve the long-term goal of limiting warming to well below to 2 degrees C (3.6 degrees F) above pre-industrial levels.

Opponents of climate action are using the Heritage study to argue that costs are high and benefits are low, but the study’s claims on costs do not stand up to scrutiny and the study fails to provide a relevant estimate of benefits. To be sure, estimating the costs and benefits of climate action is difficult, and substantive analyses are needed to inform policies that maximize benefits and minimize costs. Heritage has not provided a substantive analysis that can inform these important policy discussions.